Are you looking for the perfect day trip from Berlin? Visit Potsdam! You’ll find plenty of things to do, historical sights, museums, palaces and the best cheesecake in Germany, all a 30 minute S-Bahn ride from central Berlin!

I’ve always hated stereotypes and statements like ‘X city doesn’t feel like X country’ – after all, my hometown Milan is often billed ‘not very Italian’, something I believe is complete rubbish.

Yet, I must admit Berlin has a very different feel from the rest of Germany. We’ve visited Berlin countless times during the past few years, and always loved the alternative vibe and many things to do in winter – but until last March, we’d never made it to Potsdam, one of the most popular destinations for a day trip from Berlin.

Potsdam is the capital of the German state of Brandenburg, and it’s located just outside Berlin – but it feels a world away from the busy German capital. Last March, we enjoyed visiting on a typical winter day, even though the weather was terrible and the temperature just above freezing.

Potsdam is a kind of alter ego to Berlin – romantic and gemütlich, while the latter is urban and gritty; full of nature and pretty UNESCO-listed palaces, rather than Brutalist architecture; still with a very ‘local’ feel, while Berlin’s charm lies in its multiculturalism.

On top of that, Potsdam is steeped in history. A former hunting residence, Potsdam was chosen as a full time residence by King Frederick the Great in the 17th century, eager to escape the chaos of Berlin. Frederick’s moniker ‘Great’ is not just due to his mighty size, but also to his great achievements – he united Prussia and was a supporter of the Enlightenment, and regularly hosted artists, thinkers and philosophers in his palaces.

Even though Berlin was always the capital, Potsdam remained the residence of the royal family all the way to 1918, when Germany became a republic. The city was of strategic importance during the 20th century – the Potsdam Conference between the Allied powers at the end of WW2 took place in Cecilienhof Palace, and the nearby Glienicke Bridge was used to exchange spies between West Berlin and East Germany, where Potsdam was located.

For history lovers, a Potsdam day trip from Berlin probably won’t be enough – whereas if you just want to get an idea of the city, enjoy its chilled, small-town vibe and check out the main Potsdam points of interest, a day trip is a great idea.

Here’s the plan we followed – we had a local guide who introduced us to the history of Potsdam, something that really helped us enjoy the trip. Otherwise, just wander around and enjoy this break from busy Berlin!

The easiest way to reach Potsdam from Berlin is via the S-Bahn. You’ll find yourself in a juggernaut station-cum-shopping centre – inside there’s also the Potsdam Tourism Info Office, a great place to stop and pick up a map if you don’t have a guide.

Looking at the map, north of the station you’ll find a bridge crossing the river Havel – walk across it, passing the river island called Freundschaftsinsel on your right hand side, and you’ll find yourself in the Alter Markt, a square originally constructed in the mid-18th century, during the times of Frederick the Great.

The architect who planned the square aimed to recreate the feel of the great Italian squares of Rome and Florence – on the south side of the square is the Pompei Palace, inspired by the palace of the same name in Verona, to the east is the Old City Hall, fronted by a façade planned (but never constructed) by Palladio, and in the middle of the square there’s an obelisk, to emphasise the ‘Roman’ feel.

The square was largely destroyed during WW2 – the plan of rebuilding it to its former 18th century grandeur is still ongoing. Some interesting buildings surrounding the square are St.Nicholas Church, rebuilt in 1981, the Museum Barberini with an impressive modern art collection, and a Modernist East German building which formerly housing a vocational college, which is being torn down – sadly, may I add. All history is worth preserving.

Not far from Alter Markt there’s the Filmmuseum Potsdam, dedicated to East German movies produced in the nearby Babelsberg Film studio, and housed in a beautiful Baroque building. Another place in the vicinity that’s worth a visit is the Lindenstraße Memorial, used as a political prison by the Nazi, the Soviets and the Stasi.

By then, Potsdam’s very own Brandenburg Gate is just a short walk away alongside the Alter Stadtkanal, a waterway built in the Middle Ages to drain water from the river Havel. It was sadly empty when we were there, but it is filled with water once a year, in occasion of a canoe racing event.

From Brandenburg Gate, you can spend some time wandering the main streets of the city centre like Jägerstrasse, lined with local and independent shops, or you can keep heading East towards the Dutch Quarter, framed by Kurfürstenstraße, Friedrich-Ebert-Straße, Gutenbergstraße and Hebbelstraße, one of the coolest places to see in Potsdam.

In the mid-18th century, Potsdam was a garrison town, and King Frederick William I ordered it to be extended, but there were few skilled workers. He invited Dutch people to settle in the city, and ordered the construction of 130 brick houses in Dutch style, with gabled façades and painted shutters – so that they would ‘feel at home’.

Weirdly enough, not many Dutch people ended up inhabiting the Quarter – it became the residence of an elite corps of the Prussian army, and of several artists before falling into disrepair during DDR times. Nowadays, the houses have been restored and house cute boutiques, cafes and galleries. Dutch cultural festivals and events are also regularly organised, like the yearly Tulip Festival.

All houses also have an internal courtyard, but those are reserved to residents – if you see front door left open, try to discreetly peek inside. The courtyards are really pretty!

I found it incredible that not one, but two of Potsdam’s best things to do were actually created to honour other cultures. About 15 minutes walk north from the Dutch Quarter you’ll find yourself in a park, surrounded by 13 log houses, looking uncannily like a mid-19th century Russian village. No, you haven’t entered a time warp – this is Potsdam’s Alexandrowka, or Russian Quarter.

During the Napoleonic Wars, Prussia was an ally of France against Russia. Over a thousand Russian prisoners were taken to Potsdam, and 62 of them decided to settle permanently after the war came to an end, to sing in King Frederick William III’s choir. Shortly afterwards, Russia and Prussia entered into an alliance, and when the Russian Czar Alexander died in 1825, the Prussian king decided to honour this new ‘friendship’ between the two countries, and built 13 ‘Russian style’ homes for the singers and their families.

The houses couldn’t be bought or sold, and the deed had to stay in the family. Some descendents of the Russian singers still live in a few of the houses, while one has been turned into a museum and another into a restaurant.

After the Russian Quarter, it will be time to head to Potsdam’s star attraction, the marvellous Sans Souci Palace, built by none other than Frederick the Great. Sans Souci is often called ‘the Versailles of Germany’, but it’s far smaller than the famous French palace – with only 12 rooms, it can easily be visited in an hour or so. Entrances are strictly timed, and you’ll be provided with a handy audioguide detailing the history of this palace.

The French term ‘Sans Souci’ translates as ‘without worries’ or ‘carefree’ – it was Frederick’s summer palace, never intended to be the seat of a government, but a place to relax and enjoy nature, art and music.

The palace was built in Rococo style, a light-hearted, whimsical architectural style that was completely in line with the palace’s purpose. The interiors are decorated with flowers, animals and nature motifs, with pastel colours and plenty of references to a carefree lifestyle.

The rooms we liked best were the small circular-shaped library, covered in cedar wood, and Voltaire’s Room, taking its name from the French philosopher who resided in the Palace for several summers.

Sans Souci is surrounded by a vineyard and sprawling terraced gardens – the idea behind Sans Souci was that it was supposed to be a place for the king to relax and indulge in his passions, surrounded by nature, in line with the pre-Romantic thought that was developing around that time. Frederick called the palace “mein Weinberghäuschen” – my little house in the vineyards.

The Sans Souci grounds house several buildings and follies like the Chinese House and Temple of Friendship, built by Frederick in memory of his sister. However, it was drizzling and cold by the time we left Sans Souci, so we decided to make our way back to Berlin.

Bonus – The Best Cheesecake in Germany

However, we did have one last stop on the 30 minute walk between Sans Souci and the S-Bahn station – hot chocolate and cheesecake at Café Guam, a cake shop famous for offering the best cheesecake in Potsdam, if not in Germany!

There are about 7 or 8 cheesecake flavours on offer at any given time – traditional ones like blueberry and chocolate and more unusual ones like eggnog, poppy seeds and apricots. Paired with a steaming mug of thick hot chocolate, laced with eggnog liqueur and topped with a swirl of whipped cream, I honestly can’t think of anything better for an afternoon snack in Potsdam!

We would like to thank Tourismus-Marketing Brandenburg GmbH for having hosted us on this day trip to Potsdam. 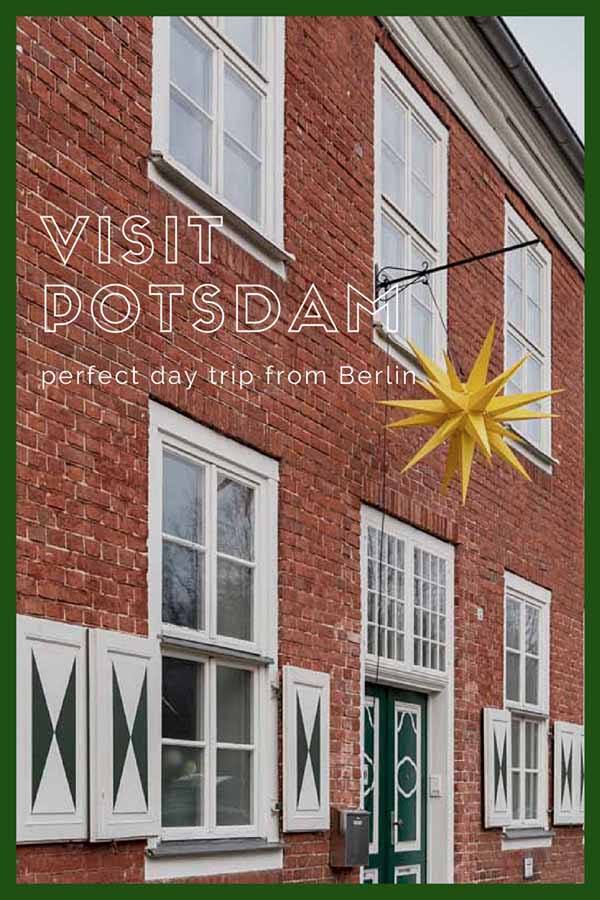 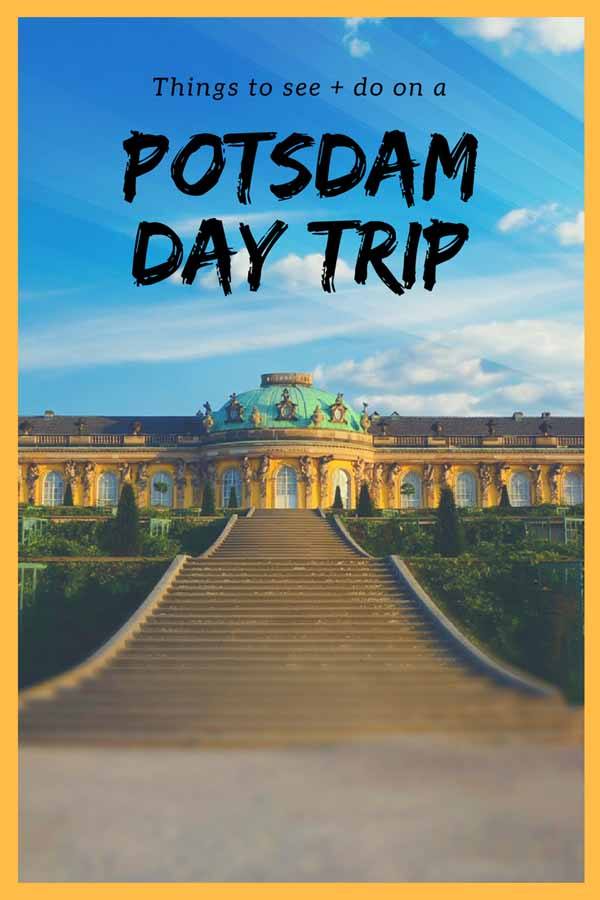