Did you read our post about what to do in Pillerseetal, Tyrol in winter? Here we share with you our favourite experience – llama trekking!

‘The Inca have a saying’ said Barbara. ‘If you look into the eyes of a llama, you’ll fall in love’.

I turned around, and looked into Loriot’s eyes. Soft, round, glittering eyes, surrounded by long, fluttering eyelashes. My gaze travelled across his face. He had two white tufts of hair at the sides of his nose, like eyebrows of sorts. Two long, pointed ears, and a coy smile that seemed to always be on – the kind of smile that spells serenity and playfulness.

I pulled gently on the lead rope I was holding, and he started to walk. Loriot’s stride was slow, yet steady – it was clear from the beginning that it was he who was leading me, and not the other way round. His long, strong neck drew a perfect arch where it connected to his back. His bottom and butterfly-tail wiggled slightly as we walked.

I guess I had looked into Loriot’s eyes for too long – I totally understood where the Inca were coming from.

I met Loriot, his brother Ronaldo and their human mum Barbara in Fieberbrunn, a town in Pillerseetal, in the heart of Austrian Tyrol. Yes, Austria, Europe – not South America. Llamas are indeed native of South America, but they live perfectly well all around the world – there are domestic llamas found as far afield as North America and Australia, but they are especially suited to living in mountainous areas.

I asked Barbara how she got the idea of llama trekking in Tyrol. ‘I wanted to offer something special’ she said. ‘An experience that people would remember.’ And this is how her business, Abenteuer Lama, was born – Barbara started organising treks with her three llamas, Loriot, Ronaldo and Simon, who live with her in a sheep farm in the Tyrolean mountains.

‘I never had to promote the business’ Barbara said. ‘People see the llama and they want to come along. They advertise themselves!’ She laughed.

When we reached Barbara’s farm, the llamas were waiting for us in the snow, all set up with a halter and lead rope, ready to go. We trekked with Loriot and Ronaldo – the third llama, Simon, couldn’t join us as he was recovering from a knee operation.

Llamas are not meant to be ridden – they look strong and sturdy, but they are only able to carry a weight of approximately 30 kilos. Barbara said they can carry luggage, but not people – not even children. Trekking with llamas means walking with them, alongside them, holding on the lead rope and following their footsteps in the discovery of the pristine landscape of the Tyrolean Alps.

‘Don’t pull the rope too hard’ Barbara said, when she gave us the instructions on how to trek with her llamas. ‘Just tug it gently, and they will follow you. Don’t walk behind them, as they might get spooked and kick you. Try not to touch their head, but feel free to stroke their neck, they love it!’

I immediately followed Barbara’s instructions and touched Loriot’s neck. It was soft and fluffy, and Loriot did seem to like it – I thought he smiled a little more, but maybe it was just wishful thinking.

‘What if they spit?’ my friend Martina asked, reading my mind.

‘They usually spit at one another, to show their ‘alpha’ status’ Barbara explained. ‘They rarely spit at humans – but when they do, they’re very accurate!’

Barbara offers a variety of llama hikes from her Fieberbrunn base – the easiest one was the one we did, the Schnuppertrekk, a 1.5/2 hour hike around Lauchsee, an Alpine lake covered in snow. However, Barbara can also offer longer outings, including a mountain trek with Alpine breakfast and multi-day expeditions.

Llamas are very social animals – the first one that Barbara got was Ronaldo, the ‘alpha’ of the pack, but she soon realised that they need companionship, so she quickly added Loriot and Simon to the family. There’s also a new ‘baby llama’ on the way, who will join Barbara’s farm next spring.

Barbara’s llamas were born just over the mountains, in Germany. Llamas are not raised for meat and wool in Austria and Germany, as the yield is not high enough to make either profitable – for instance, Barbara shears her llamas once a year, in summer, and only gets enough wool for a scarf or beanie. The two main reasons to breed llamas in Europe are to increase biodiversity, especially in organic and biodynamic farms, and the fact that they make perfect emotional support animals.

Llama Trekking is Good for the Soul

After a few minutes walking alongside Loriot, a strange calm had descended over our group. We all chatted and laughed, but the world around us seemed to move slower. Step by step, our furry friends led us down a mountain road and onto a path, making for the lake below.

‘Llamas are like dolphins’ Barbara explained. ‘They’re naturally curious but shy, and never overstep boundaries’. With that cute, mischievous smile always on their long faces, fluttering eyelashes and undulating gait, I understood why they’re such great service animals. Being with them brushes anxiety away, sweeps sadness and bad moods far beyond the mountains.

Llamas are serotonin made animal – walking with them is a natural anti depressant.

As a former autism therapist, I have seen first hand the wonders that animal therapy can do to individuals with autism. I have seen distressed children being calmed down by a horse or a kitten, children unable to speak or take care of themselves progress by leaps and bounds after interacting with animals.

Llamas are very sweet and docile, and it’s very hard to scare them. They (almost) always maintain that air of zen-like tranquility that overtook all of us as soon as we started pulling on the lead rope and make our way across the frozen wilderness. On top of that, they’re easy to train, and they’re fairly low-maintenance animals – they are happy to graze on mountain shrubs and grass, and they don’t need huge amounts of water.

If you didn’t need a few acres to house them comfortably, I’d get one myself.

Why is Llama Trekking so Special?

Suddenly, Ronaldo saw something – one of the trees bordering the path had a bunch of little green leaves still on its branches. He craned his long, strong neck over and took a bite, looking very happy with himself. ‘In winter, green leaves are like chocolate for them’ Barbara explained.

She needn’t have said more – Martina sprinted up to the trees and collected as many leaves as she could reach, giving our two furry friends a nice ‘chocolatey’ treat. They munched on the treats happily for a few minutes, before trotting off on the path – by that stage we were homeward bound, and they knew more treats awaited once we reached Barbara’s farm.

When you’re hiking with llamas, the scenery and landscape seem to become of secondary importance.  What matters is the bond with the animal you’re leading – or actually, the animal who’s leading you.

Yes, because hiking with llamas is tantamount to shifting one’s perspective onto a slower, primal rhythm. It means walking in their footsteps, looking at the world through their eyes – forgetting our troubles and the hustle of our daily lives, if only for an hour or two.

I must say that when I was offered the opportunity to hike with llamas in Tyrol, I was quite worried at first. As a supporter of ecotourism, I’m always very wary when it comes to animal activities – we always research the matter thoroughly and only sign up if we’re 100% sure we are supporting responsible operators, as it was the case when we went dogsledding in Lombardia or on an ethical shark dive in South Australia.

At first, I thought that trekking with llamas in the Alps, in a place so far away from their natural homeland, was somewhat unnatural. So I sat down with a person I deeply trust, and who I knew would be able to give me good advice – my mother, who also happens to be a vet. She told me that she didn’t believe that the mere fact of living in the Alps would be harmful for the llama – it all depended, of course, on how the animals are treated, how they’re housed, and how hard they have to work.

As soon as we reached Barbara’s farm, we realised that there was nothing to worry about. She loves her three llama as if they were their own children, and gave us instruction on how to behave with them in a way that revealed the deep love and care she feels for these creatures.

Barbara’s llamas are never ridden, and they never carry heavy loads. They set the pace for the entire hike, and as they are calm, complacent animals, there is absolutely no need to use anything to get them to follow instructions – besides a little positive reinforcement, of course!

I can’t vouch for every single llama trekking operator in the world, but I can tell you that yes, in our opinion, llama trekking in Tyrol with Barbara was 100% ethical. It was an unforgettable experience that we strongly recommend!

Lama Trekking Contacts
Barbara Steinacher
Lauchseeweg 24
6391 Fieberbrunn
Phone: +43 676 6408306
E-Mail: info@abenteuer-lama.at
This post was brought to you as a result of the #BlogVille Europe campaign, created and managed by iambassador in partnership with Tyrol. 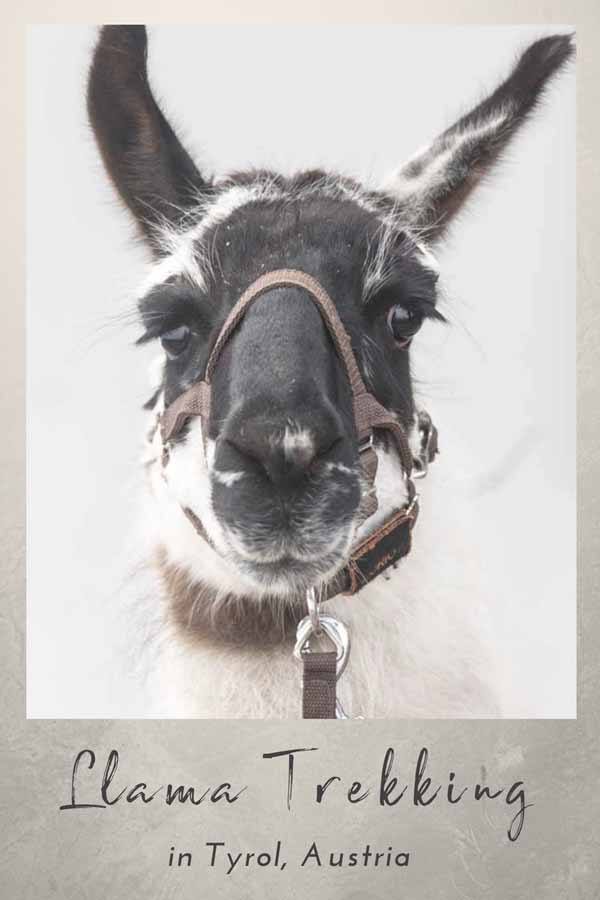 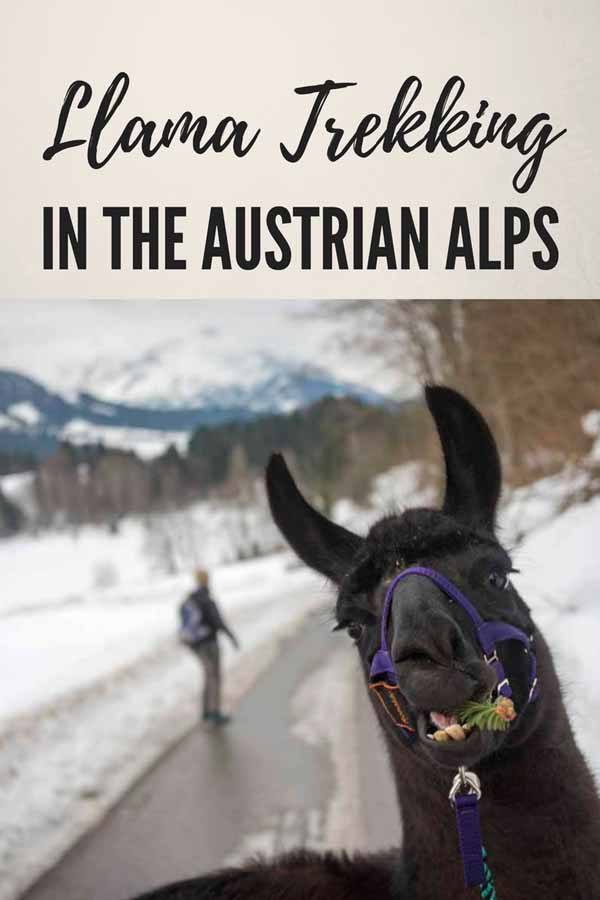 What to See Along the GR1 in the Girona Province
Next Post: 7 Amazing Things to do in Cortina in Winter