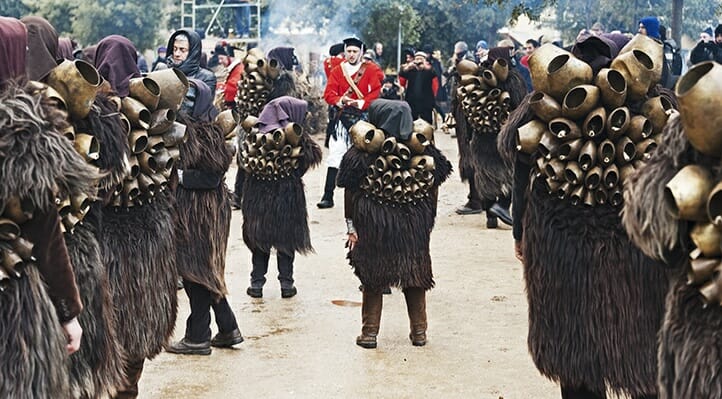 “I can’t let you in. I can’t just let anyone in. Sorry.” says Basilio, one of the eight issohadores of Mamoiada. “It is more than getting dressed. It is a metamorphosis”  he adds, as he slams the door of the Mamuthones and Issohadores Association in my face.

I am not allowed to enter the courtyard, where the preparation of the masked characters is taking place. I sneak towards a door left ajar, and glimpse moments of a century-old ritual, pervaded with superstition. The men, dressed but not yet masked, circle around a bonfire, lie on the floor, help each other strapping bells on their backs. The straps are pulled so tightly that some men seem to be about to collapse from the weight of the bells, up to 40 kilos, and lack of oxygen. Bells are arranged, straps buckled and unbuckled, crossed together. Men jump and shake their backs again and again, bells jangle. When the sound is right, the mask is worn. They are no longer men. They have become mamuthones. 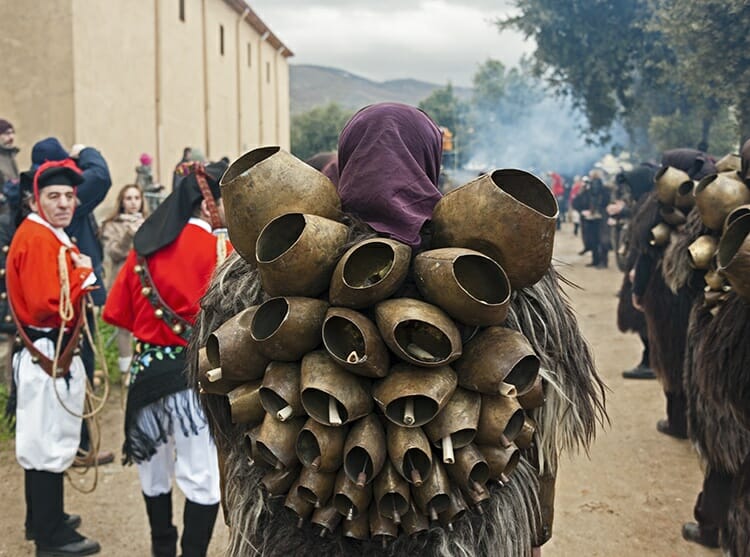 The day of Sant’Antonio, January 17th, is one of the most popular festivals in Sardinia; the saint is the protector of animals and fire, and each year bonfires are lit to symbolise purification and renewal, to ward off the cold winter and welcome spring. 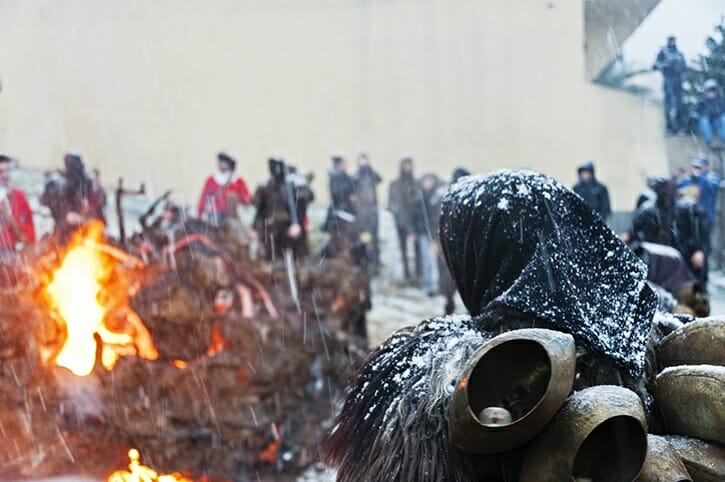 In the village of Mamoiada, the bonfires of Sant’Antonio offer a supernatural background to another event, a lot more important to local people; the first yearly procession of mamuthones and issohadores, masked characters unique to the town. Smoke billows in twirls from the fires, a sleety rain falls, interspersed with bright spells; then a double-arched rainbow appears, crossing the mountainous expanse east of town.

Many Sardinians will tell you Sardinia is not Italy. Here, people speak another language, completely unintelligible to Italian speakers; some refer to Italy as ‘the continent’, with a mixture of indifference and contempt. Barbagia is another place altogether. Far from the beaches of coastal Sardinia, Barbagia is a tough place of mountains and shepherds. The name of the region itself derives from Barbaria, barbarians, the name given by the Romans to the people of the land, proud and elusive, who never subjected to their rule. 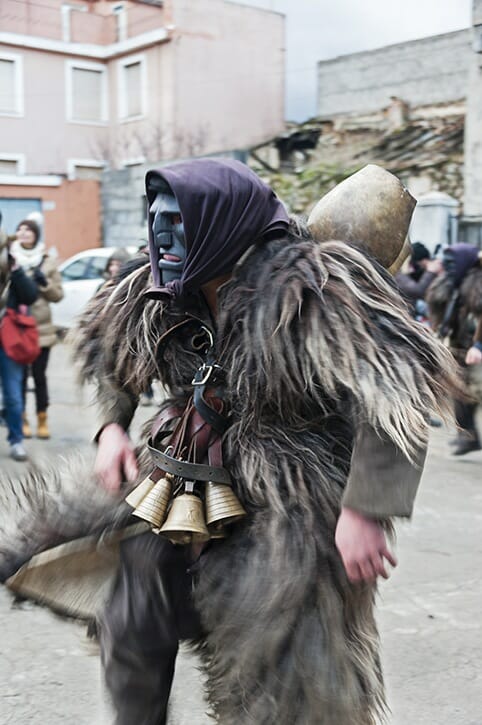 I am no longer in Italy; I am in Barbagia. Mamoiada lies in the heart of the region, tucked among a mountain massif riddled with streams and caves, where nomadic shepherding is still practiced.

The village is surrounded by squat, windswept mountains, covered by gnarled olive trees and myrtle bushes. The wind blows, thick with sleet. This is an isolated land. A place where the harsh territory allowed people to preserve their culture, language and tradition.

Mamoiada’s masked characters are an example. Mamuthones wear grotesque wooden masks, painted black. They are all handmade by local artisans, all different to one another. Some have giant hooked noses, others have protruding foreheads, pointed chins and grimacing expressions, lending mamuthones a spooky, devilish appearance. They wear vests of dark sheep fur and huge copper bells, arranged like tortoise shells on their backs. Issohadores are their lighter counterpart, vivacious and cheerful; dressed in a red tunic with a black bandolier, an embroidered, fringed shawl tied around the hips, a black hat held together with a colourful bow. 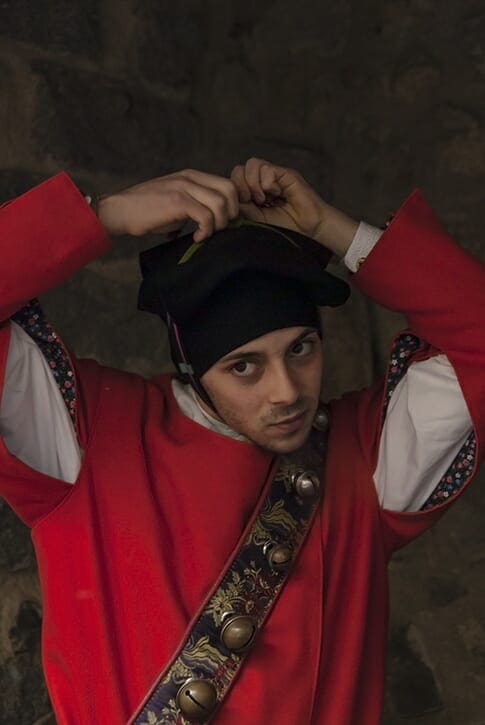 When the characters reach the main bonfire, in front of Mamoiada’s largest church, the procession starts. Twelve mamuthones in two rows, surrounded by eight issohadores. Their movement has been defined by anthropologists as a ‘danced procession’, because of the grave yet musical, rhythmical pace it follows. Mamuthones move slowly, with heavy steps, as if they were chained. Their backs are curved under the weight of the bells, under the coarse vests, under the grimacing masks. Rhythmically, they shake their right shoulder, the left foot advances, bells clang in unison. Issohadores move with agile, deft steps, surrounding the darker figures as if they were hoarding them, guiding them, then confronting them. 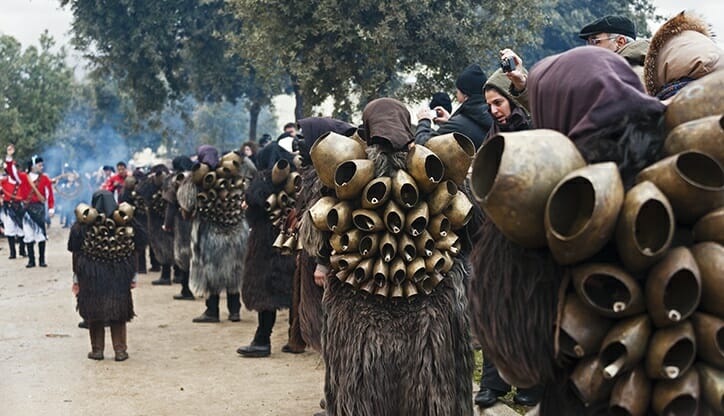 Their function is complementary; mamuthones do not interact with the crowd, while issohadores skip across the road, catching young women with the soha, the slim reed rope after which they are named. One issohadore, at the head of the group, has the function of setting the pace of the procession; every now and then he lifts one arm, then waves, the mamuthones answer shaking their bells three times, in rapid succession. 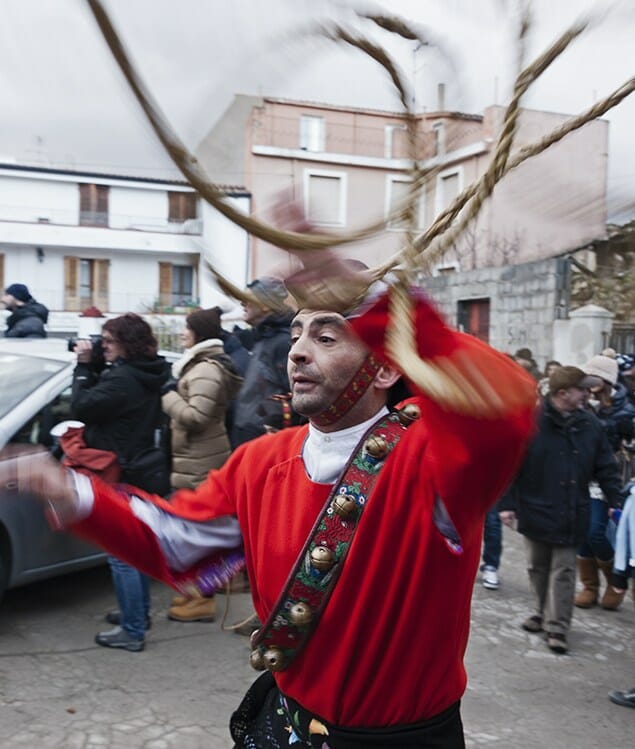 The public looks on speechless, silent and composed, as if they were assisting to a religious procession; looking scared, then between awe and bewilderment, hypnotised by the slow, yet imposing gait. There is no joy; the atmosphere wavers between austere and otherworldly. No one dares speak. The parade continues, from early afternoon to late night, repeating the dance at each of the thirty-eight bonfires in Mamoiada.

The origin of mamuthones is unknown. They have been in Mamoiada as long as anyone remembers; it is likely that the town itself has taken its name from them. Now, they are a symbol of Mamoiada’s identity. “We were born to be mamuthones” said Augusto, standing with his nine year-old son in a small mamuthone costume. “The first time, he was eighteen months old”. 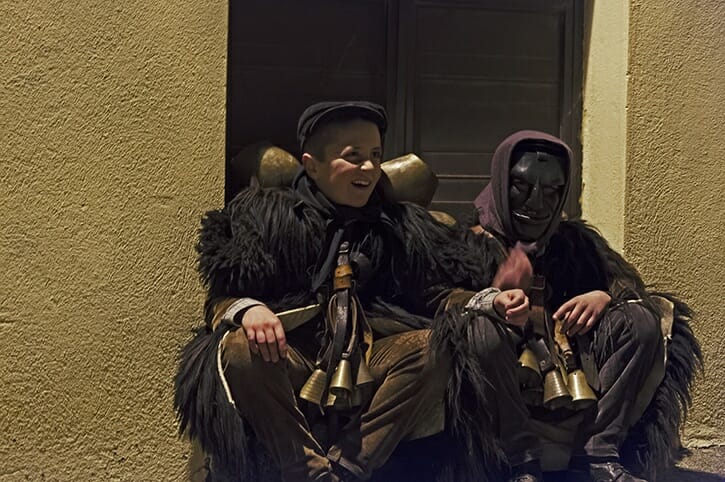 The pace of mamuthones is seen by some scholars as an interpretation of the pre-Christian limping dance in honour of Dionysus, the god of vegetation, that each year died in winter, and was born again in spring as the grass in the fields, bringing rain and fertility. According to this theory, this is why the first mamuthones procession of the year is held on the day of Sant’Antonio, celebration of spring.

Other scholars see the Mamuthones as an animal metaphor; the bells on their back are the bond between shepherd and animal, their shared destiny of working in the fields, of roaming the mountains. 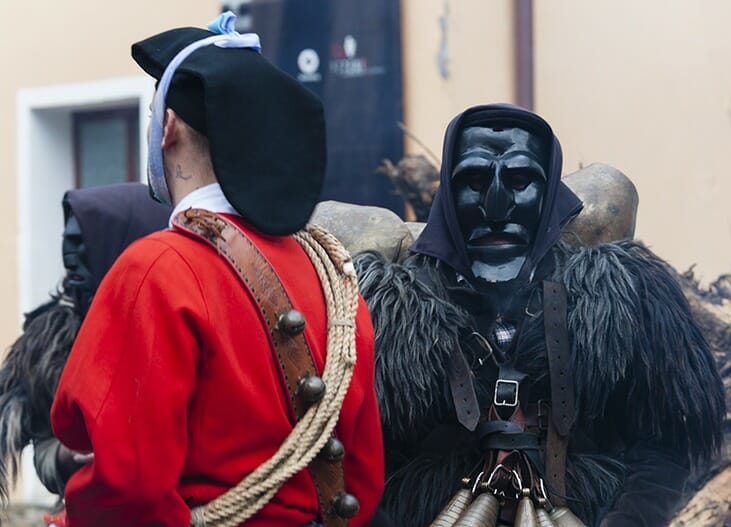 Mamuthones have also been defined as a representation of the collective soul of Sardinia. The bells symbolise the yoke of subsequent dominations, from the Romans to the Vandals, from the Piedmontese to the Italians. The cavorting issohadores in their exotic costume are the invaders; the shuffling mamuthones, bent under their load, are the Sardinians, prisoners, forever shaking the bells of their pain and suffering.

At the end of the parade, in the dead of night and bitter cold, the characters return to their association, to undress, become men again. Then the party begins, wine flowing until morning. This time, everybody is welcome to join in. 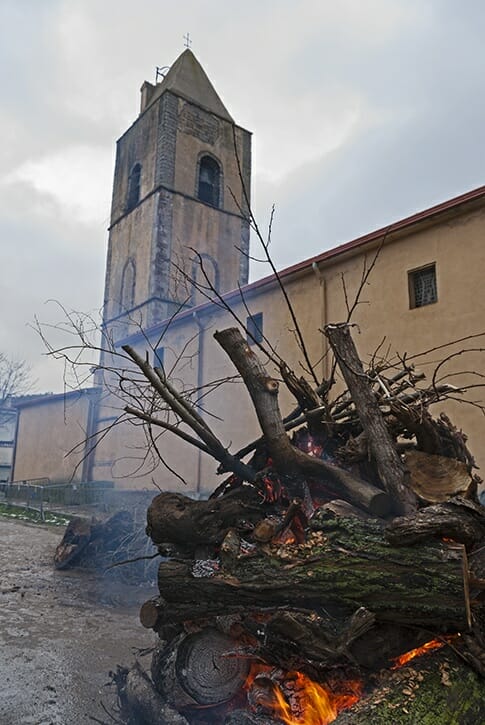 Scroll down for more pics! 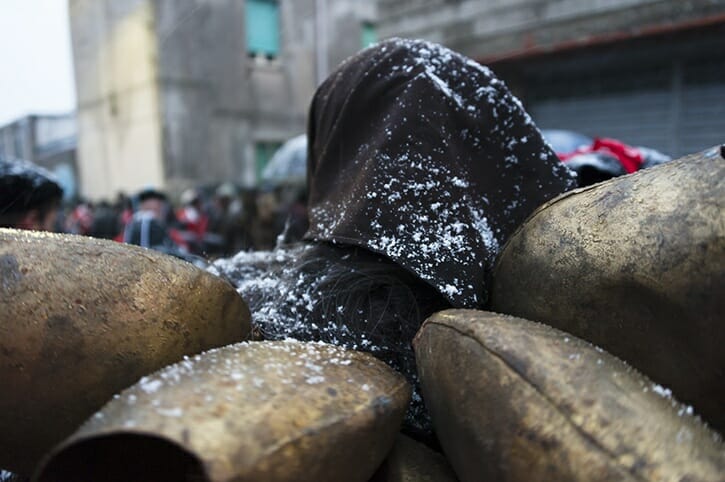 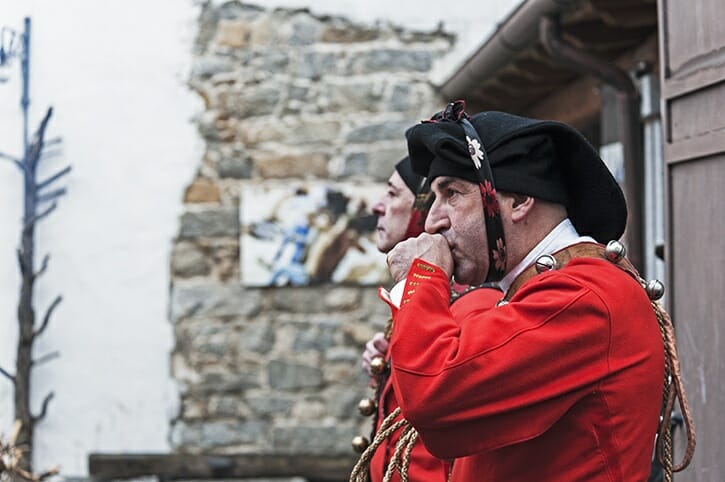 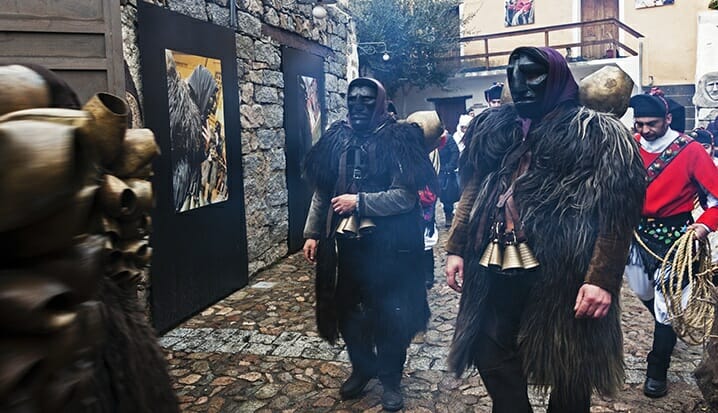 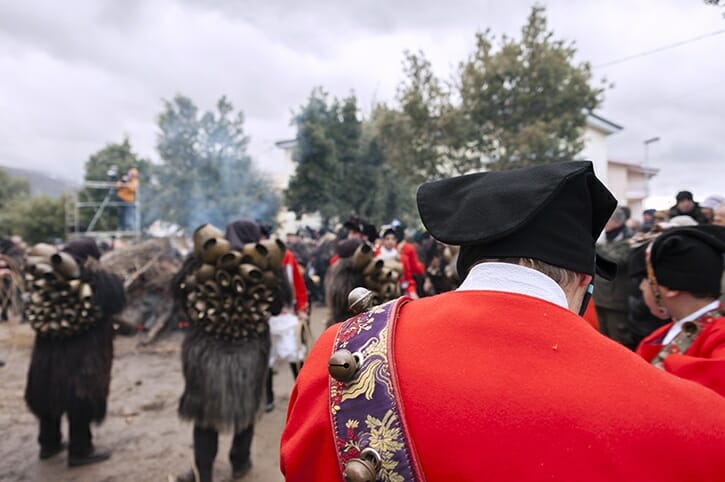 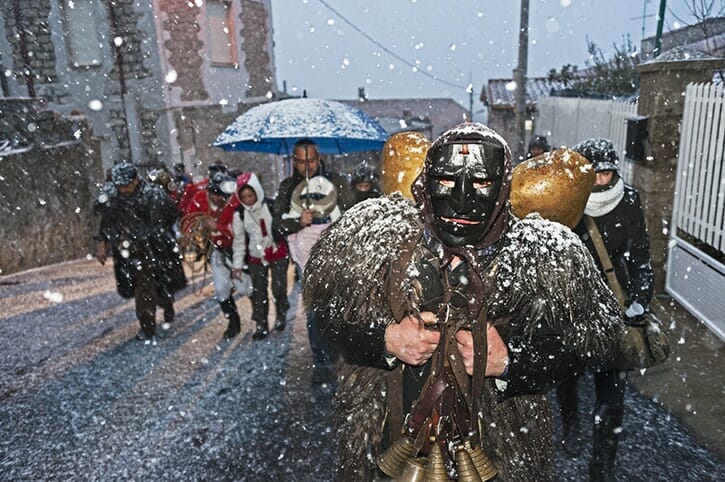 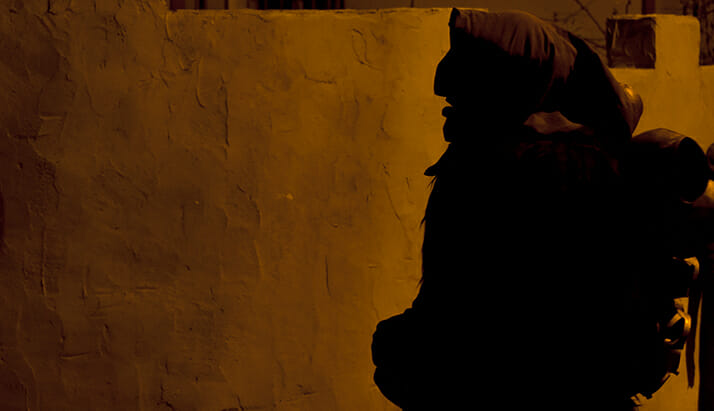