Last October, we spent one dreamy week chasing autumn in Latvia, and our favourite destination was Aluksne, a town on the edge of a lake in the eastern part of the country. To try and convey the magic of this place, we wrote a different kind of article. Hope you like it 🙂

There was no sound, save for out bikes drawing lines in the dirt path. No wind ruffling the leaves of the flaming orange-hued trees surrounding us, no birds chirping, nothing.

It looked as if we were cycling into a painting – recently-harvested fields on one side, and a hillock in the distance, illuminated by the diagonal golden light of mid-afternoon. The light that lengthens shadows, but still bears within the warmth of the recent summer.

‘I moved to Riga for about ten years, but life in the city wasn’t for me, so I returned to my village’ said earlier in the day Aigars, the local tourism representative and our guide for the day. And he wasn’t the only one – we had met at least three other people over the course of the week, who moved from a village to the city, and back again.

The reason may be the reserved demeanour of Latvians, that led the country to be nicknamed ‘nation of introverts’. Or, like we were told time and time again, it may just be the love for nature that all Nordic people bear close to their heart. Nature as a mother, a saviour, a refuge – something that the city doesn’t offer, at least not to a full extent.

Following the rhythm of my bicycle, and looking at the fields around me, I thought that the scene needed just one more thing to be even more perfect. Suddenly, I saw three figures – faint silhouettes slowly taking form, walking slowly at first, then bounding towards the woods. Three deer, one little one and two larger ones.

Earlier that day, we reached Aluksne after driving for a couple of hours on a road that wove in and out of forests, until we finally saw the town, still enveloped in early morning mist. The lake looked suspended between earth and sky, and its islands appeared as a floating mirage, like those you get on a warm summer day.

Aigars met us with a smile, and soon we jumped on our bikes – Aluksne is small but spread out, and cycling around is the best way to explore the town and its surrounds.

Our first destination was the observation tower, the highest point in town. The tower itself is only 37.8 m, but it sits on top of a hill. It is used as a fire observation tower in summer, and as we made our way up, it was obvious to see why.

We were high above the treetops, much higher even than the tallest oak trees, extending in all directions in flaming red, sunrise orange and deep tangerine patches, dotted with slender, dark green pine trees.

Lake Aluksne extended before us, with its calm, glossy waters illuminated by the morning sun. We could clearly see its four islands – Cepurīte (Hat Island), Garā (Long Island), Tīklu (Net Island) and Pilssala (Castle Island), the largest of the four, housing the ruins of Aluksne Castle, destroyed in 1702 during the Great Northern War.

Castle Island is connected to the mainland by two bridges, whereas to visit the other islands you’ll need a boat. Aigars told us that one of them is nicknamed ‘Love Island’, because local tradition dictates that only one boat can be moored at any given time.

There’s a local myth about the origins of Lake Aluksne and its islands. The region used to be inhabited by two brothers, one rich and one poor. God visited them disguised as a beggar, asking them for food and shelter. The rich brother turned him away, while the poor brother offered him hospitality, and shared everything he had.

Enraged, God decided to take revenge on the rich brother, and chose his wedding day to do so. He warned the poor brother not to attend the wedding, and on the day the whole party was flooded with water, becoming Lake Aluksne. Hat Island is named after the groom’s hat, whereas the shape of Long Island is reminiscent of a veil floating in the water.

After the observation tower, we made our way to Temple Hill, the highest ‘natural’ point in Aluksne. In fact, some say it’s not completely natural – the hill was man-made, to provide a vantage point to shell Aluksne Castle during the Great Northern War. A granite temple at the top now commemorates fallen soldiers.

Aluksne Castle is now in ruins and hosts summertime concerts, but the New Castle just across the lake stands proud with its slender English Neo-Gothic frame, surrounded by vast Manor Park.

The castle was commissioned in the mid-19th century by Baron Alexander von Vietinghoff. The Baron also laid out the plan for the extensive park, full of Romantic follies like Aiolos Temple, dedicated to the Greek wind god. Aigars told us that the temple used to contain four harps that played in the wind, but these had to be removed because they were so loud that the inhabitants of the castle couldn’t sleep at night.

Inside the New Castle, it’s possible to visit the Nature Museum, a real labour of love creadted by a local man called Aldis, who took us on a tour of the exhibits he lovingly collected – flamboyant shells, crystals, local animals and birds, each with their migration pattern laid out on a paper map.

Aldis also showed us his impressive collection of agates, and we spent time together interpreting the patterns in the rock.

This looks like a cloudy sky over the sea, and this reminds me of a landscape with rolling hills, like the ones you see in England or Ireland.

Then, just as it was time to go, Aldis said ‘I’ve got a surprise for you’. He led us to a room, and turned off the light. At first, nothing happened – then we heard the notes of Celine Dion’s ‘The Power of Love’, and dozens of minerals laid out in cabinets started shining colours we didn’t expect.

We rode again, through the birch trees of Manor Park whose fallen leaves had turned the paths golden, and then along the streets of the town. We were bound for the Bānītis, the narrow-gauge railway connecting Aluksne to Gulbene, 33 km away.

The  was once part of a much longer railway line opened in 1903, which like many similar railways around Europe, fell into disrepair throughout the 20th century, with the rise in road transportation.

‘Locals simply love the Bānītis, we couldn’t let it go’ said Aigars. And so, instead of letting the railway rust forgotten in the wind, or turn it into a cycle path, it was restored, and it now runs two daily journeys. The 33 km take approximately an hour and a half, rolling on vintage stock through fields and forests, stopping at stations that are now little more than a bench under a platform.

There’s also a museum dedicated to the history of the Bānītis – non just its official history, but also its meaning for local people. The museum is set up like a railway car, with each window corresponding to a stop. Visitors can sit and watch period footage while listening to local people narrate their memories related to the Bānītis. We listened to tories about berry and mushroom picking in Dunduri, war tales in Paparde, memories of teenage love aboard the train in Kalniena.

While watching the Stameriena video, I discovered a little ‘Italian connection’ – famous writer Giuseppe Tomasi di Lampedusa spent some of his years living in the estate owned by his wife’s family, a Baltic-German noblewoman. During his time in the Latvian countryside, he is said to have written the first words of his masterpiece, Il Gattopardo – a book I always promise myself I should read.

We hopped on the Bānītis, and spent the length of our half-hour journey either admiring the interiors of the vintage cars, or looking out the windows, where views of the Latvian countryside were slowly unfolding, accompanied by the rhythmic clackety-clack of the train.

In Paparde, we got off and back onto our bikes, that we had taken on the train with us. By then, it was almost sunset. Golden light illuminated our path, and when the Bānītis disappeared in the forest, everything became silent.

We rode back to Aluksne in total solitude, with only one exception. Three deer sprinting across the fields, headed to their home in the forest.

Other Things to do in Aluksne

Aluksne is full of things to do! I mentioned some of them in the article, and you can find others listed here.

Getting to Aluksne from Riga

We would like to thank Linda and Lelde from LIAA -Investment and Development Agency of Latvia for supporting our autumn trip to Golden Latvia! 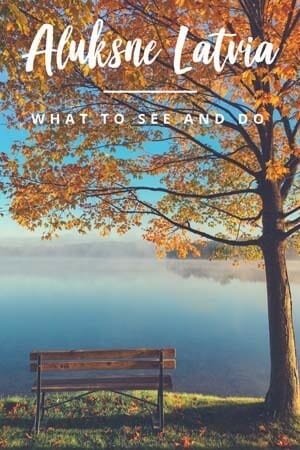 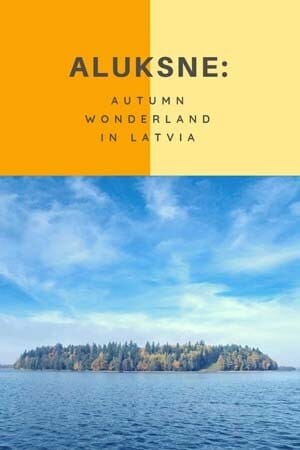 The Best Milan Views (Plus Local Secrets!)
Next Post: 10 Things to do in Sigulda, Latvia (Plus Amazing Pics!)