Back to Japan! After discovering anime in Tokyo on a tour of Akihabara, we set off to explore nightlife in the Japanese capital on a Tokyo Izakaya tour with Taka from Beauty of Japan!

Behind the boulevards and avenues of Tokyo there’s a parallel world. A web of alleyways and backstreets, some of them so narrow that Google Maps won’t reach, twisting and turning around one another until – randomly – you somehow end up finding your way back.

Wandering around the Tokyo backstreets we found all sort of things. Fancy hipsterish boutiques and post-modern coffee shops in Kichijoji, sporting rows of coffee siphons. An alleyway lined with hairdresser shops – like 20 in less than 200 meters – somewhere between Harajuku and Shibuya. Whimsical cat cafes. Vintage shops with handwritten signs on otherwise anonymous doors. And lots and lots of tiny bars, some of them with standing room for only 10 people, filled with smoke and chatter. And we’re not even talking about all the weird and wonderful sights all over Japan – have you ever heard of Okunoshima, Japan’s Island of Rabbits?

These bars are Tokyo’s izakaya, the Japanese version of pubs, where local sarariman (office workers) head to after a day at work. Much like elsewhere in the world, a post-work drink is a way to let go of the troubles and stresses of the day – especially prevalent in a hyper-competitive society like Japan, where workers are often expected to embrace company culture with little time for anything else.

In an izakaya, you can order drinks and small plates of food, kind of like Spanish tapas, and share them with your friends. People order Japanese sake, beer, shochu (a popular distilled spirit) or even wine, and enjoy yakitori, fried noodles, sashimi and lots of other nibbles, some of which are typical izakaya food and only served there.

Naturally, exploring the Tokyo izakaya scene was on our list of things to do in Tokyo, but we didn’t know where to start. We speak no Japanese whatsoever, and oftentimes izakaya don’t even have menus – neither in Japanese nor in English. How would we find the right izakaya, given that finding places in Tokyo is difficult to begin with, and Google Maps works badly in the backstreets? How would we know what to order, and how to behave, where to sit and so on?

Why we chose a Tokyo Izakaya Tour

That’s when Taka-san, the self-styled Tokyo ‘bar master’ came to our rescue. Taka is an experienced traveller who noticed that many Tokyo-based operators only show a very stereotypical side of Japan – the usual Tsukiji market tours, sumo shows and bus tours around the country. He aims to do something different, offering his help as a local friend and allowing his guests to enjoy a side of Tokyo that visitors might find hard to approach by themselves.

We chose to join Taka-san’s izakaya tour, and met up with him on a rainy afternoon opposite Shimbashi station. The area around Shimbashi is a kind of Tokyo version of the City of London – everywhere we looked we saw office buildings and sarariman (and women) walking fast down the streets in immaculate suits.

It was still kind of early when we met Taka-san, and he led us to the first izakaya of the tour – a really, really small bar, no bigger than my bedroom, full of people sitting elbow to elbow around long wooden tables. There was only a curtain on the doorway – no sign, no name whatsoever, and yet it was one of the most popular izakaya in the neighbourhood. ‘In one hour, there will be a line out the door – trust me!’ he said.

We let Taka-san order for us, and soon delicious plates of food started appearing on the table – creamy potato salad, fried anchovies soaked in vinegar (kind of like a Japanese version of Venetian sarde in saor), noodles with pig’s intestines (a lot nicer than it sounds) and glistening sashimi – remember that Tsukiji market is just around the corner! Naturally, he also ordered the izakaya’s signature drink and dish for us to taste – a shochu and sour tomato cocktail and fried spam with panko breadcrumbs.

Yes, you heard that right – SPAM of Monty Python memory, the ham substitute loved and hated by many. Admittedly I don’t think it was actual spam, it must have been a local brand, and it was actually delicious, deep fried and drizzled with sticky-sweet sauce. I was afraid of taking my first bite but ended up wolfing a whole one down.

When we exited we found Taka-san was right – there was a queue outside the izakaya. Our second stop was going to be a place specialising in sake. We had previously mentioned we’re not big fans of sake – admittedly, all the sake we had tried up until that point was dubious quality firewater offered in pan-Asian restaurants to digest greasy food. Taka-san decided to embark on a one-man mission to change our mind about sake – and boy, he did manage.

The sake bar was actually inside Shimbashi station – don’t ask me where, as we walked under tunnels and down corridors for a good 10 minutes, and my head was already clouded from the beer and shochu/sour tomato cocktail.

The bar was standing room only – that might sound odd to Europeans, but it’s actually commonplace in Japan, where it’s also easy to find standing sushi and standing ramen joints.

Taka-san ordered three sake tasting sets, one each. Mine also had a glass of ‘cloudy’ (unfiltered) sake, looking like milk, with a creamy and sweet flavour. Definitely not what came to my mind when thinking of sake, up until that point. We took turns sipping the tiny cups, and discovered that each of them had a different, distinctive taste – some were sweet and delicate, some dry and punchy, others with citrussy undertones or toasted notes. We were told that, just like wine, every sake is different – the type of rice, type of soil, weather and filtration determines the final flavour.

[Related – Where to stay in Japan on a Budget]

We left the sake bar with a newfound appreciation for sake, and an even cloudier head – but Taka-san had one more place in store for us. He led us down more and more tunnels, across a department store and down again to an underground alleyway full of izakaya. He chose one, with an elderly lady behind a counter and people sipping whisky while she chopped and handed small plates to the punters. A few of them were smoking – another common sight in Tokyo, where for some strange reason smoking is forbidden in the streets, but allowed in restaurants.

Instead of whisky, we decided to try Hoppy, a beer flavoured soft drink that was invented in Japan in post-war times. At the time, beer was beyond the reach of the impoverished, war-ravaged country – and so, Hoppy was consumed mixed with shochu, a distilled spirit. That’s exactly what we had, and I must admit that it wasn’t a bad beer imitation – but I still prefer regular beer!

Do you guys eat everything? Taka-san asked. Yes, we said. A few minutes later the lady handed him a plate covered with carpaccio-like slices, of a deep red (almost black) colour, topped with chopped shallots.

Can’t tell you, you said you’d eat everything – Taka-san replied.

No, please, tell me.

I’ll tell you afterwards! And he smirked.

I took a bite – it was like really strong beef. My mind started wandering – I mean, I knew it wasn’t going to be dog, but I thought it might be some weird kind of offal, or penis, or something like that. Why else would Taka-san be laughing, looking at me chewing the mystery food?

Then, he revealed the mystery.

It was my turn to laugh. HORSE! You see, in Italy eating horse it totally normal. Just like eating beef, or chicken. I told Taka-san, and he looked relieved – apparently, when Brits or Americans say ‘yes’ to eating everything and end up tasting horse, some of them are utterly disgusted.

After some time sharing jokes and bar experiences with Taka-san, we said goodbye opposite the turnstiles of the Yamanote line entrance of Shimbashi station. Droves of workers were making their way in and out of the station – some from the office, some from the izakaya. Thanks to Taka-san, we also got to join part of their world, for one evening.

We were guests of Taka-san and Beauty of Japan during this tour. All opinions are our own – we loved the tour and highly recommend it. 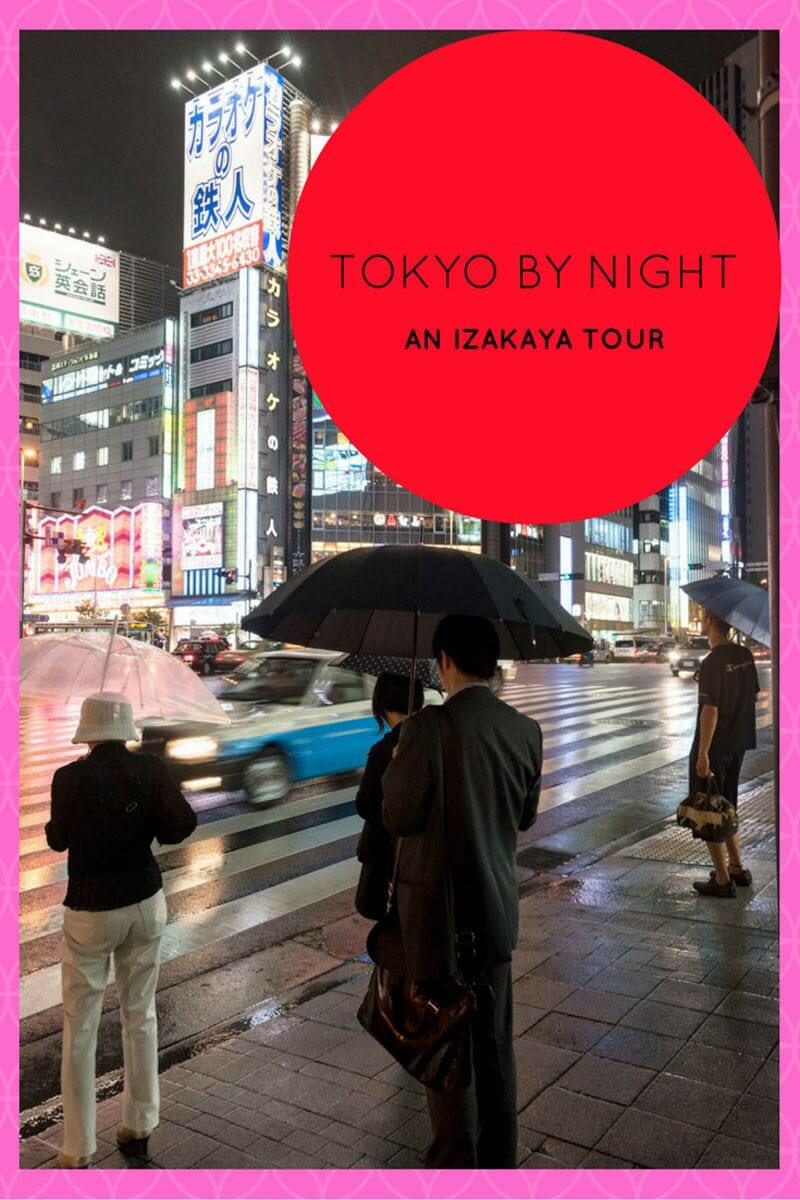 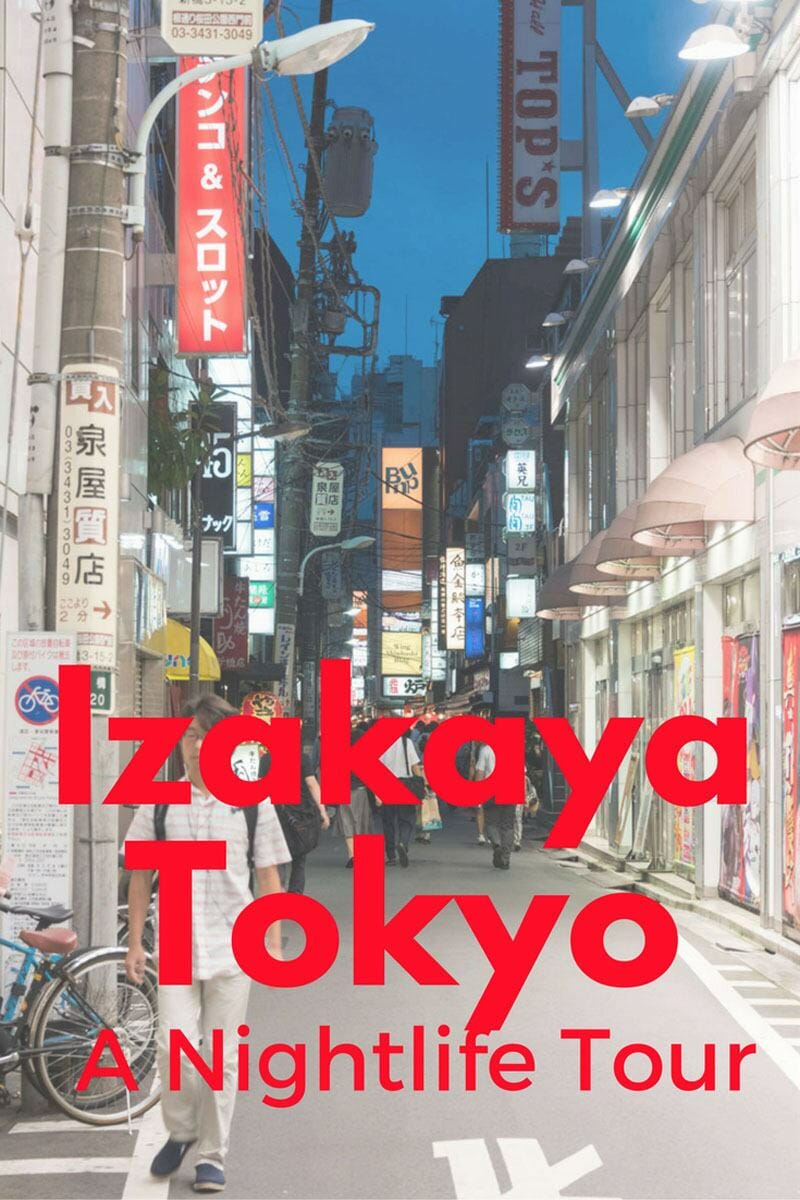