Back to Africa! During our road trip across South Africa we stopped for three days in Lesotho, the wonderful Mountain Kingdom surrounded by South Africa, and had a lovely stay at Malealea Lodge, a fantastic place to stay and experience ‘Lesotho in a nutshell’!

Before traveling to Africa, I didn’t know what darkness was. In Europe and Asia, electricity turns nights into a multicoloured continuation of the day. In rural Africa, when night falls, the realm of darkness begins.

I noticed it for the first time in Madagascar – in the absence of street lights, the rhythms of the day are still dictated by the cycle of the sun. It’s rare to see people out after dark. There’s no halo of street lamps, no neons flickering. The world seems to have fallen under a soft, black quilted blanket, so thick it’s hard to see even your own feet.

3 Days in Lesotho – Our Arrival

The same thought mulled in my mind as we drove into Lesotho for our three-day stay, right at the moment of day when shadows can’t lengthen any further. The tangerine sunset gave way to a mauve twilight, and afterwards, darkness fell on us.

We kept driving following the dusty haze of our high beams, an uncertain blue dot inching its way through Google Maps. Finally, after a couple of hours, we reached a mountain pass known as ‘Gateway of Paradise’, halfway down an unpaved, potholed road – there was a plaque on the rock wall, bearing a message, but it was too dark to read.

It may well have been the Gateway of Hell, for there was not a single light in the entire valley.

Our destination was Malealea Lodge, a sustainable community lodge high in the mountains of Lesotho. Even though, in Lesotho terms, the 1800 meters of Malealea aren’t even that high – the small country is also known as ‘the mountain kingdom’, as the entirety of its territory is comprised of mountains. At 1400 meters, the lowest point in Lesotho is the highest lowest point in any country in the world.

I have always been fascinated by small countries – the idea of a separate entity developing independently while completely surrounded by a larger, often (but not always) more powerful country. Why isn’t Lesotho part of South Africa, I wondered. After all, it’s not a tax haven like Monaco or Andorra, nor an economic powerhouse like Singapore.

The country was unified in the early-1800s by King Moshoeshoe I, a chief who collected local clans around his leadership and transformed a fragmented tribe land into a single political entity. Lesotho was a British protectorate for just under a century, until it gained independence in 1966.

Basotho culture is influenced by neighbouring South Africa, but it also retains some unique features, including traditional music, handicrafts and clothing. The most recognisable pieces of clothing are the Basotho blanket, a thick, patterned woollen blanket worn differently by men and women, and the Basotho hat, a conical hat depicted at the center of the national flag.

After reaching Malealea in darkness, we woke up to a glorious bright winter day. The lodge was located in a clearing on the top of a hill, surrounded by mountains on all sides. The lower half of the mountainsides was terraced, and planted with sorghum and maize, the two staples of Basotho diet.

There were very few trees, and in the drought of winter the landscape looked golden and burnt ochra, save for the deep blue of the rocky peaks stretching onwards towards the horizon.

Lesotho is one of the poorest countries in Southern Africa, with the majority of the population supporting themselves through subsistence farming and shepherding. The country is also plagued by a rampant HIV epidemic – it is estimated that up to 25% of the population of Lesotho is HIV positive.

Staff at Malealea Lodge comes from the neighbouring villages, and the lodge organises community and village walks that benefit local businesses. On top of that, every evening a local choir and band are invited to perform for tourists at Malealea. Choirs and bands are usually made up of disadvantaged local young people, looking for – in the words of a choir member – ‘a purpose in life, an alternative to sitting around in the village’.

Having two full days to spend at Malealea, we decided to look for guides to explore the surrounding area. The lodge also created the Malealea Development Trust, training local guides, and ensuring all guides work on a rotation basis, meaning that everyone gets to work whenever there are tourists, avoiding the unpleasant ‘pick me! pick me!’ scenes we often encountered elsewhere in Africa.

The tag line of Malealea is ‘Lesotho in a Nutshell’, as the activities allow visitors to experience a sample of what the Mountain Kingdom has to offer, even with a relatively short stay – we found that 3 days in Lesotho were a good amount of time to experience the area. We opted to spend the first day hiking to the nearby Pitsaneng Gorge, a small canyon created by a river running lower down in the valley, about three hours round trip from Malealea Lodge.

Our guide was Messi, a skinny twenty-something with wiry legs and buck teeth, who dreamed of Barcelona from his hut in Malealea village. Following Messi’s Wellington boots, we crossed maize and sorghum fields to a lookout across the valley – ‘down there, that was my school’ he said, pointing to a squat, white building, lost in the patched terra-cotta vista.

Then, it was time to descend, led by Messi who, in turn, seemed to be following the tracks of a young shepherd, leading his goat herd down into the gorge. In the dry season, the river had dried up in places, resembling more a collection of rainwater pools rather than the gushing flow of water that carved the streaked, curved canyon walls over the centuries.

We walked down the riverbed, hopping onto rocks and tiptoeing across ledges when the canyon was narrow and the water was deep, until we reached a deep emerald-turquoise pool, created by a dam of fallen rocks. ‘You can swim if you like’ said Messi – I dipped my toe into the clear, freezing water, and politely declined.

The following day we opted for a pony trek, a quintessential Lesotho activity on offer at Malealea. Basotho ponies are stout, resilient and obedient, making them the ideal mean of locomotion to cover the goat tracks and passes of the mountain kingdom. Nick’s pony was named Rothmans, and he was the same flecked grey of cigarette ash, while mine was Rasta, and his mane was the deep-red like freshly-ploughed African soil.

The ponies were calm and docile, easy to ride even for novices such as ourselves. We crossed the village, where children in freshly-pressed school uniforms greeted us from the playground and the thatched roofs of rondavels stretched all across the valley. The midday sun flooded the valley, with the crisp magnificence you only get at lower altitudes, and once we left the village with its sounds of everyday life all we could hear were the hooves of our ponies clapping against the stones.

A few hours were enough to get deep into the mountains. The ponies negotiated hills easily, never losing their footing even on the steepest hills. ‘Trust them’, our guide had said, a quiet and stern young man that was the polar opposite of chatty Messi, and spoke only to reprimand us of our terrible riding.

We rode for most of the day, stopping only to follow a young boy into a cave with 20,000 year-old paintings, made by the Khoisan people, the original settlers of the whole of Southern Africa. Devoid of life, save for some hardy trees and shrubs and the odd goat who strayed off the herd, the mountains of Lesotho are a place where nature still shows itself in its raw, primal form, untouched by the (il)logics of civilization and mass tourism.

A place where poverty is still very much prevalent, but models of sustainable tourism have been able to make a difference in the lives of many – the young choir members, the guides who earn a living sharing the secrets of their land with the tourists who venture to the Mountain Kingdom.

When it was time to leave Lesotho, we drove once again to The Gateway of Paradise. This time, the timid light of the early hours illuminated the unpaved road, the fields and villages, the terraced mountains all the way to the horizon, where the mountain peaks shone in the distance, reflecting the pale blue sky.

The plaque read ‘Wayfarer, pause and look upon this Gateway of Paradise’. And I couldn’t help but agree with the explorer who first gazed upon this view, and thought of heaven.

We would like to thank Malealea Lodge for hosting us during our stay. 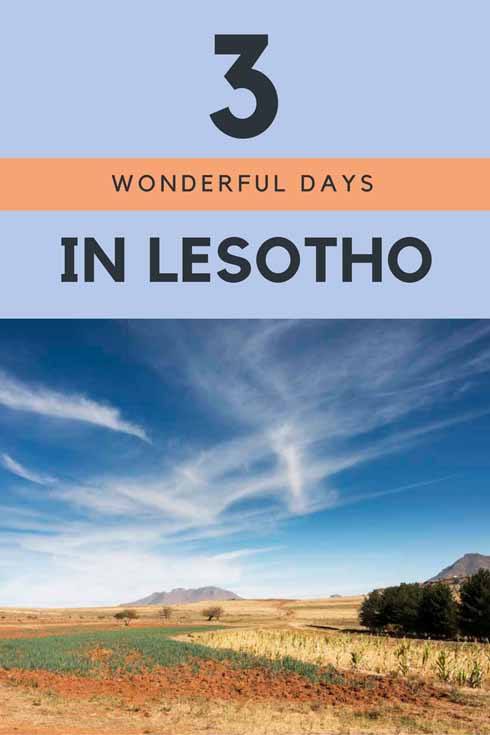 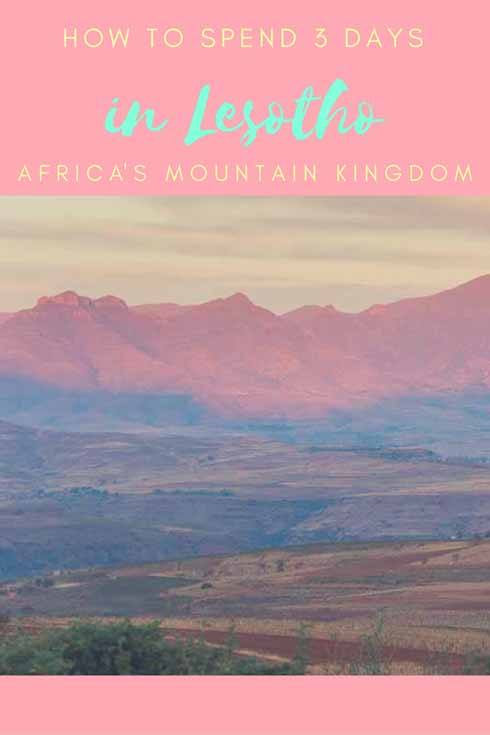 8 Reasons why Jyrgalan is the Best Place in Kyrgyzstan
Next Post: 40 Amazing Things to Do in Kyrgyzstan and Travel Tips