Have you ever wondered where we disappear every year in February? Welcome to Château Feely, a biodynamic winery near Saussignac, in the Dordogne region of south-west France. We’ve just finished housesitting here for the third consecutive year, so we thought it was about time to tell you about Château Feely and what’s there to see and do in Saussignac!

Serendipitous. If you asked me to describe our housesitting experience at Château Feely in southwestern France in one word, I would choose serendipitous.

We first got in touch with Caro Feely, owner of this biodynamic winery with her husband Sean, in November 2015, a few months into full-time travelling. You see, we both always wanted to try housesitting – yet we never got round to signing up to a housesitting site, and after having heard that scoring your first housesitting assignment isn’t easy, we kind of gave up on the idea.

Yet, luck was on our side – a mutual acquaintance put us in touch, after Caro told him she was looking for house sitters, remembering that we mentioned we wanted to have a go at housesitting. It was a win-win situation – and after a quick Skype call, the assignment was ours.

Would you like to know more about housesitting and its benefits for home owners? Here is our 7 Reasons to Get Housesitters post!

We travelled to Château Feely at the beginning of February, one day before the Feely family flew to South Africa for their three and a half week holiday. The winery is located near the village of Saussignac, a one-square hamlet deep in the slumber of winter, dominated by the frame of a 15th century stone-grey château.

The 13-hectare winery surrounded a beautiful stone house with blue shutters, dating back to the 17th century. Our duties included taking care of a dog, Dora, a beautiful princess that stole our hearts, two cute cats, Gims and Leah, and eight chickens.

Our days at Château Feely started with an early morning wake up to let the chickens out of their coop and collect fresh eggs. That happened just after sunrise – sadly, the weather was often bad, but we still got to enjoy some beautiful mornings.

The house is built on a hill, and some days the valley at the back of the property was filled with mist, others it was bathed in pink or covered in frost, and one day I even spied a deer ambling through the vines.

After feeding the chickens, we usually went back to bed for an extra hour or so, then it was time for breakfast and Dora’s walk. We took Dora for an amble around Saussignac, and once even down to Gardonne, a larger village with shops and restaurants approximately 5 km away.

Then came lunch, and the afternoon was usually spent working, playing with the cats, taking Dora on another walk (if the weather allowed), and or driving to one of the nearby villages for grocery shopping. It was a great opportunity to slow down, to catch up with work and enjoy the countryside tranquility.

We loved housesitting at Château Feely so much, that we returned the following year. And then the year after that, always in February. The family always goes on holiday around the same time – that is because running a biodynamic winery is back breaking, year-round work, and the only time when work slows down is in February, after the winter pruning is done.

During our stay at Château Feely we also had the chance to learn about biodynamic winemaking. One of the rare sunny days we had the first year, Caro’s assistant Cécile took us on a tour of the vineyard. The first signs of spring had started to appear – pink petals peeked from beneath the buds on the almond tree right next to the chicken coop.

There were some wildflowers in the lanes between one row of vines and another  – daisies, dandelions and even a few daffodils. There was still some pruning to be done, and Cécile led us around with her shears on her belt, while the stunted vines stood straight like rows of diligent soldiers.

Cécile explained that respect for the land is at the heart of biodynamic winemaking. The movements of the moon and planets affect the soil, which in turn affect the wine. The land becomes a living, sentient being – making wine is not just a sequence of actions, it’s a tale of love and respect for nature.

Caro and Cécile check a bulletin about planet movement before deciding when and where to work in the vineyard. ‘When you’re angry, you don’t want to work – explained Cécile – so why should we work if the land is angry?’

Biodynamic agriculture sounds almost like witchcraft at first – to give you an idea, one of the techniques used is burying cow horns stuffed with dung. It has been criticised by many, because its basis are philosophical and not scientific – in fact, biodynamic winemaking and agriculture seek to preserve knowledge about the land applied for thousands of years, before being swept away by the advent of industrial farming. According to Elizabeth Candelario, co-director of Demeter, the leading non-profit biodynamic certifier, “biodynamic agriculture treats the farm like a living organism, self-contained and self-sustainable”.

Another feature of biodynamic agriculture is the use of no chemical pesticides whatsoever. Instead, ‘concoctions’ are used at Château Feely to keep insects away – water and herbs are boiled together in a cauldron, stirred constantly, and the resulting liquid is sprayed on the vines.

The logo of Château Feely is a Celtic triskell, in reference both to Sean and Caro’s Irish heritage and to the whirlpools made when stirring the concoctions. Biodiversity is also encouraged – among the vines we saw flowers, bushes, grasses of all kinds. ‘It helps with pollination’ Cécile said.

Biodynamic agriculture aims to return the land to its natural, healthy state, reintroducing ‘critters’ and the biodiversity stripped away by pesticides and chemical herbicides.

The result? A far, far cry from any wine I’ve had so far. Ever.

Every year, Sean and Caro left us some wines to enjoy during our stay, and I can say that we’ve enjoyed every single one. We’re far from being wine connoisseurs, but we have many wonderful memories of evenings by the wooden stove at Château Feely, sipping Générosité, their barrel-aged semillon with vanilla and peach aromas, or La Source, their Merlot/Cab Sauv blend named after an ancient well found among the vines.

Yet, our very own favourite remains Grâce, with round memories of blackcurrant and elderberry and a spiced, cardamom-y finish.

Do you think it’s all about sipping Merlot and listening to the sound of the wind ruffle the vines? Think again.

What to do in Saussignac and Around

I would say Château Feely is definitely the #1 reason to visit Saussignac. If you find yourself in southwestern France, don’t miss this place. If you’re visiting outside of winter, Sean will be more than likely busy with the vineyard, but Caro will definitely be available – she runs a variety of wine tours and tastings, and even has a wine school if you’re really serious about your wine!

You can also stay at Château Feely, in one of the two gites (rentals) located on their property – the Wine Cottage, which is actually one half of their home, and the Wine Lodge, ecologically-built and with a spectacular view over the vineyards.

Saussignac was hibernating during our three visits, but in summer it’s a whole other story, with festivals, concerts and events like farmer’s markets and moonlight walks around the village. Harvest time, or vendanges, must be absolutely magical – it’s a busy time of year, but it’s also the time when the entire community gets together, to celebrate work and the land.

Besides Château Feely and Saussignac itself, there are a lot of things to do and see in the surrounding area. You can’t miss visiting Bordeaux, a city that needs no introduction. Another wonderful place to visit is Bergerac – the vieille ville (Old Town) still maintains some of the original medieval street plan and half-timbered houses.

There are also boat trips on offer along the Dordogne river, and Bergerac wine tastings pretty much anywhere you look – wines from the Bergerac appellation are just as amazing as the ones from the Médoc or Saint Emilion, but not as famous (hence, much cheaper).

If you’re around on Saturday, it’s market day in Bergerac – but to be honest, we prefer the market in nearby Issigeac, held every Sunday. Issigeac is a tiny, well preserved bastide town – a fortified market town built during the time of the Hundred Years War, common in southwestern France. It’s very popular with tourists in summer, but the market and the Medieval surrounds are a photographer’s dream.

Finally, when in France you can’t neglect to mention food. During our visits to Château Feely we had the chance to try two nearby restaurants – La Tour du Vents, a Michelin-starred establishment in nearby Monbazillac that offers a great value market menu at lunchtime, and Famille Moutier, THE PLACE to go for a great value, duck-based Périgourdine feast.

If you are into wine and nature and find yourself near Bordeaux, I wholeheartedly recommend visiting Château Feely. After each of our stays, we’ve left completely relaxed and refreshed – it may have been the silence, being surrounded by nature, or the delicious food and wine we’ve had each time. But we’ve been in lots of similar places, and Château Feely is different – there’s something extra, a kind of positive energy that makes you feel well, happy and connected.

Is it biodynamic agriculture? If you treat a place with love and care, it will love you back. I don’t know – it may sound like witchcraft, but trust me, it works. 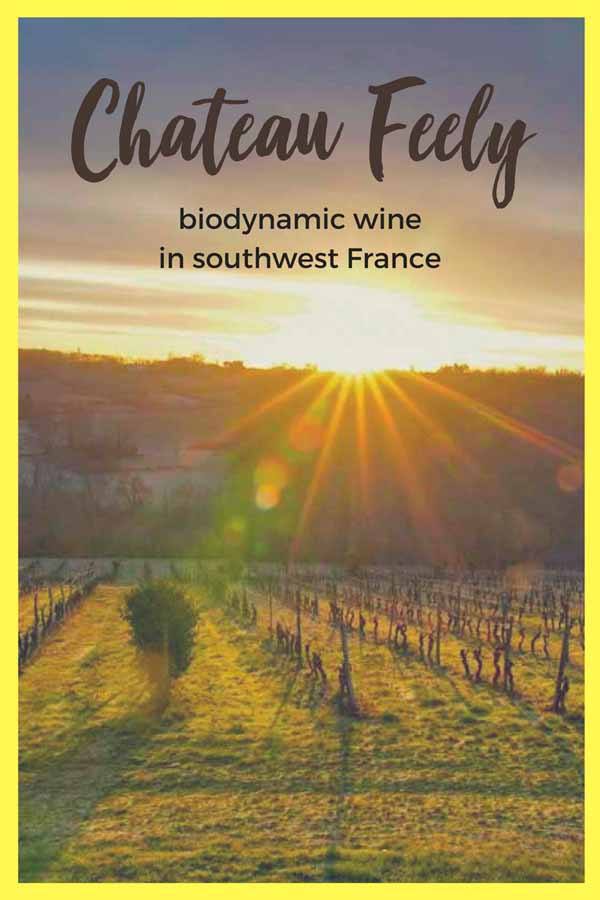 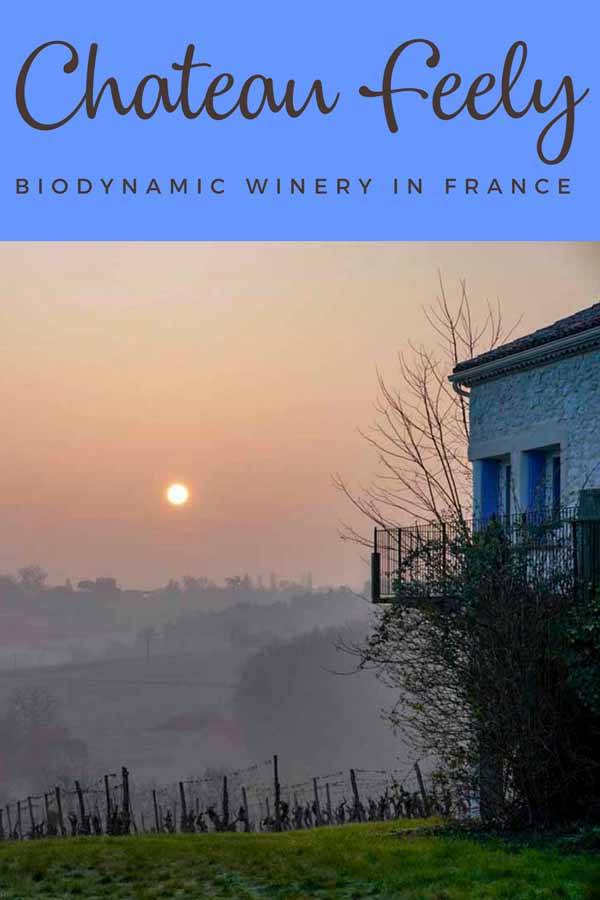 Weekend in Milan – A First Timer’s Guide
Next Post: Where to Discover Kyrgyzstan Crafts and Traditions