My last post from Sicily, after my love letter to Ragusa Ibla and a night spent in a masseria in the Sicilian countryside. This time, I returned to a masseria, for the best ever cooking class in Sicily. And a little trip down memory lane.

PS. You can also have a go at cooking with nonna in Rome, or enjoy Sicilian street food in Palermo!

I woke with birdsong. Light streamed into my room from the window; I stayed in bed for a while, drifting between sleep and consciousness, so close to dreams I could touch them, smell them.

The birdsong got louder. One bird sang, a magnetic tweet, followed by others, sharp and crystalline, like raindrops on water. I walked out of my room, into the Sicilian countryside. A bird mama was feeding her babies. She had nested under the eaves of the roof; the babies were barely visible, but boy, could you hear them.

She flurried back and forth, carrying tiny worms and placing them in the mouths of the little birds, again and again.

The other guests in the farmhouse were still asleep. I could see the owners preparing breakfast, placing trays of fresh fruit and warm ricotta on a heavy wooden table. The sun was shining warm – it was probably going to be over 30, despite still being spring.

I walked around the farmhouse for a while. The sun made the white buildings shine. The countryside was basking in the early morning sun, and the sea shimmered at the horizon. Everything around me exuded warmth. I touched the warm soil, ran it through my fingers. The flowers were in bloom; they were orange, pink and red, as big as a fist. The plants in the herb garden floated their scent through the air.

Sicily is maternal. It is warm and comforting like an embrace, it can be difficult, it can be tough, but it’s a place where you can find refuge, once everything gets too much.

That trip, from the very first instant when I landed at Catania airport and saw Mother Etna, hovering particoloured in the morning sky, I felt at peace. For this island used to be home. I was at peace wandering around Ragusa Ibla, a place that is a piece of my heart. I was at peace when we spent a night in the heart of the Sicilian countryside, making cheese and listening to war stories.

The Best Cooking Class in Sicily

But in that place, Le Chiuse di Guadagna, I wasn’t just at peace. I felt I was with family.

Le Chiuse di Guadagna is a family business, Luca’s dream. He moved to Milan to study and work, but the longing of that farmhouse where he spent his childhood was too strong to ignore.

Helped by his family he lovingly restored it, pulling weeds and sanding doors and fixtures, wall after wall, brick after brick, until Le Chiuse became a haven of peace between sea and countryside. When we visited, Luca was working his notice in Milan, and his parents were running the show in his stead.

I was at Le Chiuse for a cooking class; something I love doing, but I rarely get to. We gathered in the breakfast room, along the long, heavy wooden table, where the ingredients were neatly displaces. Mounds of juicy almonds, lemon peel and sugar for biancomangiare, our dessert. We followed the instructions unstoppable Pina, a former teacher now pastry artist and cake designer.

We crushed almonds in a mortar and pestle, then cooked them on the stove with milk with infused lemon peel. When the peel ran out, we picked lemons straight off the tree, leaving our fingers scented with lemon essence. Finally, we set the biancomangiare in dainty ceramic moulds that had been in the family for a century.

But the real work had not even begun. We were going to make scacce, a kind of filled bread, specialty of Ragusa and its province. The afternoon rolled into the evening as Pina showed us how to make dough, working it and kneading it with our hands.

Meanwhile, memories rolled into my mind, memories of fifteen years before, so close and vivid I could smell them. My boyfriend’s mother and aunties making scacce for Christmas, kneading dough on a long, heavy wooden table.

The dough was left to rise, then it was rolled out into a circular shape. Pina was inflexible, pointing out imperfections like a stern teacher from last century. Her pastry was as perfect as Giotto’s circle, mine was knobby and uneven, sometimes square, sometimes oval.

Then, fillings were brought out. Cipuddata, a pot full of sweet, heartwarming tomato sauce with onions, as nourishing as the summer sun that made the tomatoes ripe and juicy. Chunks of sharp, salty ragusano, sweating ever so slightly in the warmth of the evening. Bunches of parsley, plump anchovies, warm and silky ricotta, the kind you only find in Sicily.

Then, peppery local sausage, and my own very favorite, capuliato. Crushed sun dried tomatoes kept in a jar with a tiny bit of oil and basil – the sight, the smell, even the thought of it are able to transport me back fifteen years, to the sun-baked streets of my boyfriend’s village, with tomatoes laid out to dry on wooden crates.

Those tomatoes, minced into capuliato, would be his lifeline, his connection back to the Mother Island during the long months of the northern winter. He would spread it on bread, use it as a seasoning for pasta, but only ever sparingly.

Pina showed us how to mix fillings – and even then, mistakes or creative licenses were not a possibility. Ricotta and sausage, cheese and tomato, sometimes with slices of grilled aubergines with mint. Pina spread the fillings on the pastry then rolled it into a long, rectangular shape.

Parsley would go with anchovies, dotted with gems of capuliato, and folded into a half-moon shape.

The arc of Pina’s eyebrows reminded me of my boyfriend’s mother. Her sharp black eyes were just like those of my boyfriend’s auntie Concetta. And just like then, during those long nights in the lead-up to Christmas, when women started baking in the afternoon of December 23rd, I stole morsels of sausage and chunks of cheese, slid an anchovy in my mouth and ate spoonfuls of capuliato from the jar. Pina saw me, but said nothing.

The evening had turned into night, lit by the sickle of the moon and bejeweled with stars. It was gone eleven when we finally sat at the table to eat our scacce and biancomangiare.

And just like during those Sicilian Christmases from the turn of the century, the first scaccia I had was a tomato, cheese and aubergine one.

The following morning I was woken by birdsong. A thin cry, like a blade of grass floating in the wind. A bird had fallen from the nest and lied limp and bald on the floor, under the eaves. I stood still, unsure of what to do, unsure of whether it was alive or dead.

I thought of calling someone, but a man came, stepladder under his arm. Placed the tiny bird back into the nest. It started tweeting again – a little louder, this time.

Many thanks to Alessio from Gente in Viaggio and Stefania and Serena from Sicilying, who invited me on this trip. All opinions are my own – and the memories were priceless. 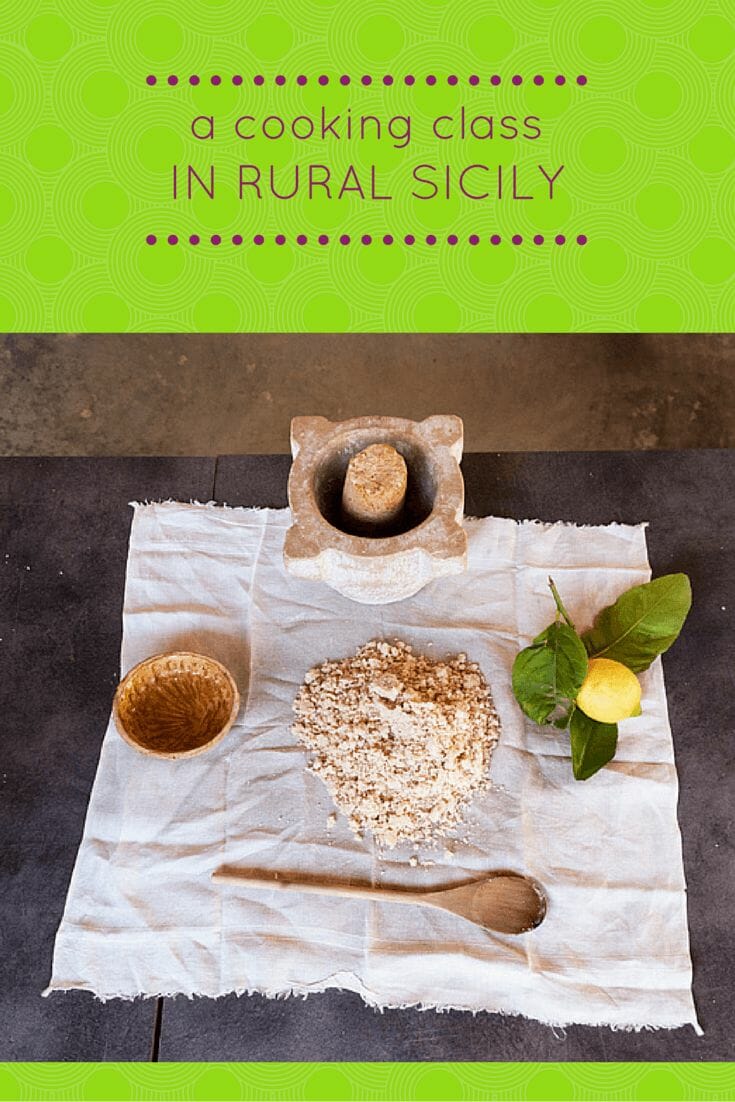 9 Italian Dishes you Simply Must Try
Next Post: Levanto, our Liguria adventure paradise