Welcome to Rifugio Cespedosio, the second instalment of our Bergamo foodie road trip around the Bergamo province in collaboration with Hertz! We spent two days driving a shiny Fiat Cinquecento from Milan to the top of Val Brembana, tasting delicious food on the way. We’ve already told you all about Moscato di Scanzo, a unique ‘meditation wine’, and today we’ll take you for lunch in a mountain hut.

As a lifelong hiking lover, I’ve come across several mountain villages in the Italian Alps. Some are abandoned, with houses and buildings slowly being reclaimed by the elements, many still living a kind of in-between life, with only a handful of full-time residents but several holiday homes, mostly owned by former residents.

While driving our Fiat Cinquecento down SS 470, running the length of Val Brembana, we saw several of those villages, clinging on the mountainsides between rocks and sky.

Cespedosio – One of the Smallest Mountain Villages in Italy

Cespedosio is one of them. The turnoff from the SS470 was really hard to see and wasn’t even marked, as if locals wanted to conceal a secret. After a turnoff, 6 km of switchback began, then a narrow, potholed road running along the mountainside, past a marble quarry, through a forest, and finally reaching the village – a smattering of houses, half of them uninhabited, built around a church, and surrounded by mountains as far as we could see.

Our destination for the day was Rifugio Cespedosio. The Italian term ‘rifugio’ refers to Alpine refuges or mountain huts, places where people exploring the mountains can find food and shelter for the night. Most rifugi can only be reached on foot, whereas Rifugio Cespedosio can also be reached by car – I found driving a small car like the Fiat Cinquecento was perfect to negotiate the twisty mountain road.

Would you like to know more about foodie things to do near Bergamo? Here is our complete foodie itinerary around Bergamo province!

Welcome to Cespe! Piero, the rifugista, greeted us warmly as soon as we walked in. I’ve been to a fair number of rifugi in my life to learn that oftentimes, meeting the rifugista (owner/manager) is half the fun. Usually, rifugisti are either locals or mountain lovers that have moved to the mountains in search of a better life.

Piero belonged to both categories – his family was originally from Cespedosio, his father was born when the village was home to 150 people, and there were a school and a resident doctor. Then the ‘Industrial Revolution’ of the 1960s came, and pretty much the whole village moved ‘down below’, to the valleys, looking for work in the factories near Bergamo. Now, the village only counts 14 full time residents.

Fifty years later, Piero made the reverse journey that his grandfather did, chasing his dream to run a rifugio and live in the mountains, the same mountains where his father was born, and where he spent all his holidays as a child.

I left my home in the valley, but I went to my other home in the mountains, Piero explained.

Inside, the rifugio was cosy and wood-panelled, decorated with an array of mountain knick-knacks. Food in rifugi can be hit and miss – but I had specifically chosen to visit Rifugio Cespedosio for its authentic Km 0 mountain cuisine, all made from scratch by Piero and his wife.

The place was packed with locals – I recognized the guttural tones of the Bergamo dialect, hard for me to understand even though I was born only a few miles away from the region. Next to us, a group of labourers poured the house red into white ceramic bowls that I had mistakenly assumed were going to be for soup.

Drinking wine from ceramic bowls is a very old mountain tradition, typical of Lombardia – even though when I asked, no one really seemed to know where the tradition came from.

We started our lunch with a cured meat and cheese platter. ‘I made this, and this’ said Piero, pointing to paper-thin slices of pancetta and a coarse salami studded with peppercorn. ‘I didn’t make these, I got them from Angelo. And I get the cheese from Matteo, he’s 25 and just like me, he’s moved back to the mountains’.

Every single slice of cured meat was absolutely mouthwatering – the pancetta was melt-in-your-mouth soft, the salami and coppa (cured pork neck) had a delicate herb flavor, and we even got to try a punchy horse bresaola, also a delicacy in nearby Switzerland.

There’s no set menu at Rifugio Cespedosio – every day Piero cooks what’s available, and there are generally three pasta dishes and three or four main courses to choose from. ‘You have to try my famous casoncelli!’ he stated, handing us two plates of ravioli shaped like wrapped candies, topped with crunchy sage and browned butter. ‘We make all these by hand, me, my mum, my dad, my wife, my daughters… everyone helps’.

I’m a big fan of casoncelli, and I’ve had them several times – I can tell you that the ones that Piero served us were by far and away the best – the strong flavour of the salami filling was ever so slightly set down by the sweetness of the brown butter. I polished the plate in two minutes flat.

I asked Piero to surprise us, and he served us a second pasta dish, homemade maccheroncini in salmì – a sauce usually made with game and red wine, but we had a beef version. When I told Piero how delicious it was, he boomed ‘But of course! This is my Fiorella!’ Piero raises two cows at the time, providing enough meat to feed his family and the guests at Rifugio Cespedosio.

We couldn’t resist a taste of pork knuckle with thick slices of polenta, another mountain favourite, but sadly he had run out of cake. Next time, he promised, before erupting into cheers – Atalanta, the local football team, was playing on TV and had just scored a goal against Roma.

Outside, I could hear the sound of prayer, coming from the tiny church next door. Two children pushed bails of hay up a hill, while a donkey and a goat grazed in a paddock.

I asked Piero if the children were living in ‘Cespe’ full time. ‘No’ he replied ‘But they love it here. Maybe one day they’ll follow my footsteps, who knows, and they’ll move back, too.’ 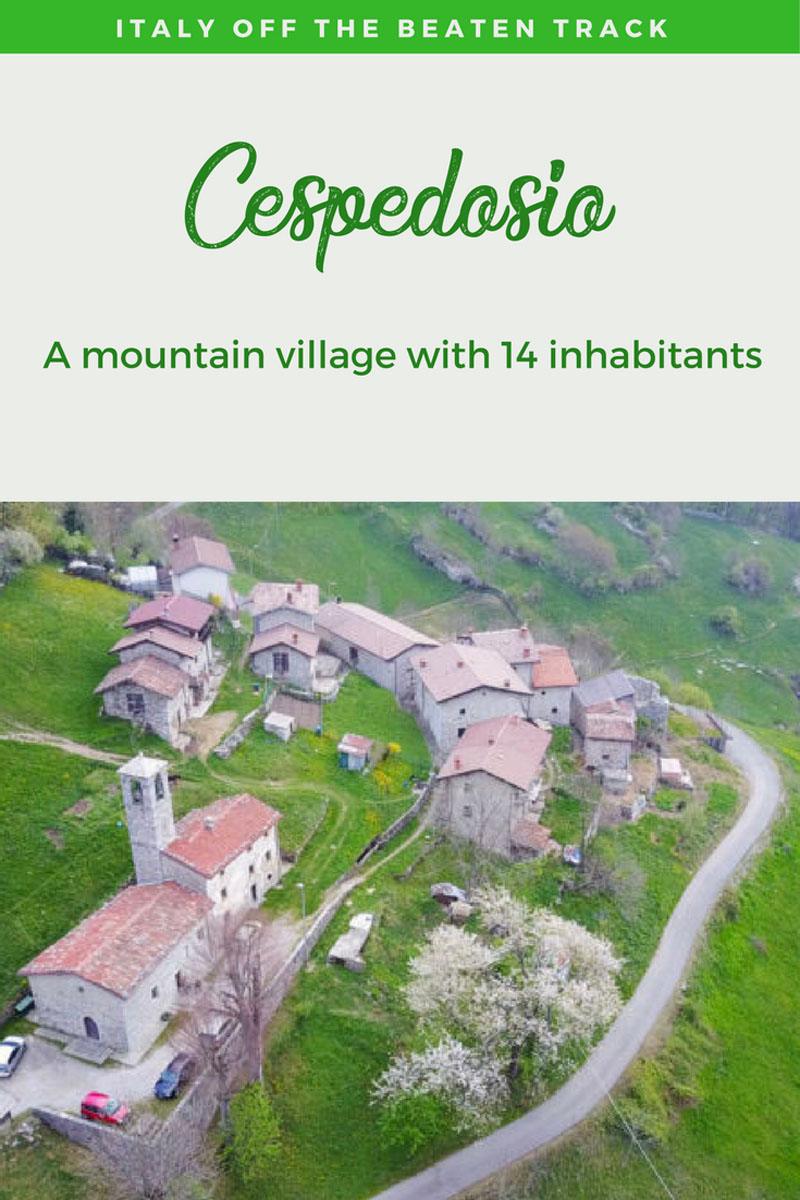 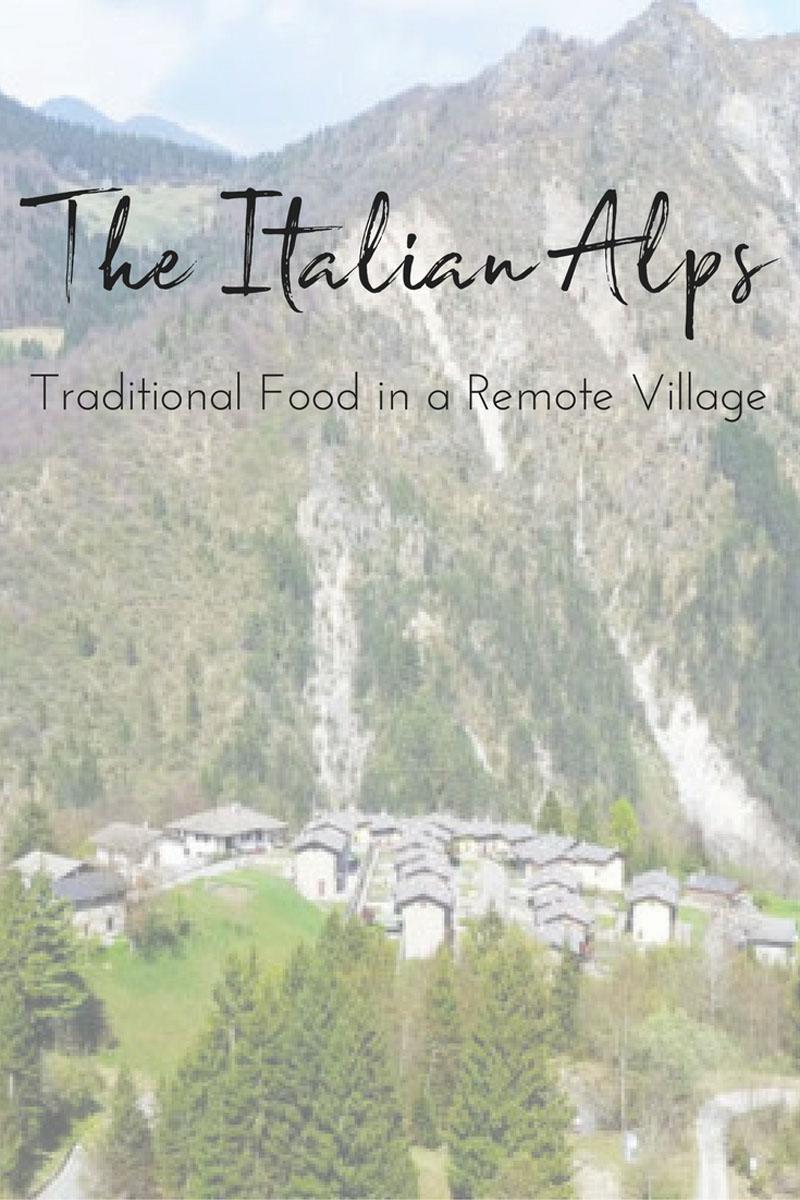