Five years ago we nearly divorced after a kayaking misadventure in Laos. Now, we love it! Our favourite Borneo Adventure was kayaking on the Semadang river in Sarawak with Buffalo Tours, a company that organizes amazing tours of Malaysia and 11 other countries in Asia!

Sarawak is a land sculpted by rivers. As our flight came into land in the Malaysian state of Borneo, all we could see was forest and rivers, snaking across the blue-green expanse of trees and vegetation.

From high above, the forest felt like a mystery – a place where orang utans still live in peace, hidden in their nests on the treetops, and hornbills paint the skies with their colourful, odd-shaped silhouettes.

Kuching, the state capital, is cut in half by the Sarawak River, with its latte-coloured waters slowly flowing towards the ocean. On one side you’ll find the city, its high-rise hotels side by side with old Chinese shophouses. On the other side there are two sleepy kampung (villages), where women bake kek lapis (layered cake) and life comes to a standstill in the hottest part of the day.

If you travel to the interior of Sarawak, roads disappear and rivers are often the only connection between cities and remote communities. There are still barges plying the slow-flowing rivers, carrying people, timber and produce, and often canoes are the best way to travel between one village and another – unless you want to spend hours trekking in the sweaty jungle.

On the rivers, life slows down. The world acquires that kind of laziness that is associated with tropical climates. Birds don’t zip across the sky – they flutter. Fish let themselves be carried by the current. You often come across fishermen or villagers paddling up and down stream – the only exception to slow-moving life are children, running around the riverbanks then diving from trees and swings.

From Kuching to the Rainforest

After having spent a week in Kuching, exploring its incredible culinary scene and taking day trips to some of the surrounding sights, we thought it was time to explore the forest.

So, early one morning we found ourselves driving towards the Indonesian border together with a young man called Macqueen (great name for an adventure tour guide, right?), for a day kayaking in the rainforest. Unlike Sabah, where most primary rainforest has been felled to make way for palm oil plantations, the forests of Sarawak are in pretty good conditions.

Macqueen is a ‘Land Dayak’, or Bidayuh – the names describe native Bornean tribes from the interior of Sarawak, as opposed to coast-dwellers that are known as Iban. Most Bidayuh and Iban are Christians – having refused to accept Islam because they traditionally bred pigs, more suited to the jungle than other farm animals, and because they enjoy alcohol.

They converted to Christianity after the arrival of missionaries, but they still retain some of their traditional, animistic beliefs.

After an hour drive or so with Macqueen from Kuching, we got to a kampung in the middle of nowhere, where we grabbed our canoes and slid them into the waters of a tiny river. The plan was paddling towards the larger Semandang River – one of the tributaries that forms the Sarawak River.

Macqueen gave us a quick ‘kayak lesson’, warning us of rapids and debris in the river. However, there was nothing to fear – in November, the rainy season hadn’t yet started, water was low, so we were in for a leisurely paddle.

Macqueen is the only Bidayuh operator of kayak tours in the region – giving us the chance not only to enjoy the wonderful nature on a lovely sunny day, but also to learn about the life and traditions of native tribes.

The previous day we visited Annah Rais longhouse, a traditional Bidayuh dwelling that welcomes tourists. Several families live in one longhouse – each family has separate living quarters, but much of daily life is communal.

At Annah Rais, we also visited the ‘warrior room’, a hut containing the skulls of defeated enemies. Traditionally, only other warriors (and never women) are allowed near the skulls, but I guess the Bidayuh of Annah Rais have made an exception for tourists.

I asked Macqueen about headhunting, and he assured me that it no longer exists. The practice of headhunting came to an end in the mid 19th century, when Rajah Brooke, the British ruler of Sarawak, convinced local chieftains that it was detrimental to trade. However, the practice made a quick comeback at the end of WW2. After the Japanese surrendered, several of them were killed and beheaded by local tribes as revenge for the atrocities suffered during the occupation.

Kayaking and on the River Semadang

After kayaking for an hour or so, we made a stop in Kampung Danu, a local village on the river connected to the opposite bank (where the road is) by a suspension bridge. Kampung Danu has won the price of ‘most beautiful kampung in Sarawak’ for a number of years, because of the immaculate way it’s kept, with gardens, fruit trees and flowers. Even though it was only 10.30 am, we sat down to lunch.

Normally, when on a day out in nature, I don’t have high expectations for lunch. A soggy sandwich or plate of limp noodles are more than enough – this time, though, we had one of the best meals of our time in Malaysia.

We devoured platters of chicken cooked in bamboo, curried vegetables and okra with sambal, all accompanied with locally harvested organic brown rice. For dessert, we ate fresh fruit (including dragonfruit! Yum!) and a glutinous rice cake that tasted exactly like sticky toffee pudding.

After lunch we started paddling again – and the more we paddled, the wider and slower the river became. Shortly before Kampung Danu, we turned into the larger Semadang river. The water was the colour of milky tea, and everything was so still and silent that we thought the whole world was asleep.

The only noise that broke the silence was the rhythmic whoosh of the paddle as it hit the water, the breeze blowing through the forest, and the ruffle of leaves – whether it was birds or monkeys, we’ll never know.

We did pass a couple of ‘rapids’ – sections of the river where the water flowed just a little bit faster, but nothing dangerous. There wasn’t much to speak of in terms of wildlife, just some kingfishers and other small birds. I was dying to spot a hornbill – Sarawak is also known as the ‘land of the hornbills’, but during all our time in the state, we didn’t see any.

We did spy a few fish, even though the river waters were rather murky. Some of the kayaking tours that Macqueen offers include fish feeding, part of a conservation project between local operators and NGO to maintain fish life active in the river.

Near the the end of our 12 km paddle, Macqueen led us into a small limestone cave, so tiny that i could barely turn our double kayak. There, in total silence and near darkness, we stopped for a moment – feeling the stillness of Mother Nature’s belly.

The whole day had been about contemplation. It’s hard to talk while you paddle, and there were no adrenaline rushes to speak of – not in November.

We spent most of our time just being there – watching the blue wedge of sky, where river and forest ended, wondering how many locals had enjoyed the same view across the centuries, when hornbills still fluttered across the skies of Sarawak and orang utans could cross Borneo, swinging from one tree to the other.

We would like to thank Buffalo Tours for having welcomed us on this trip. All opinions remain our own – but trust us, the tour was amazing! 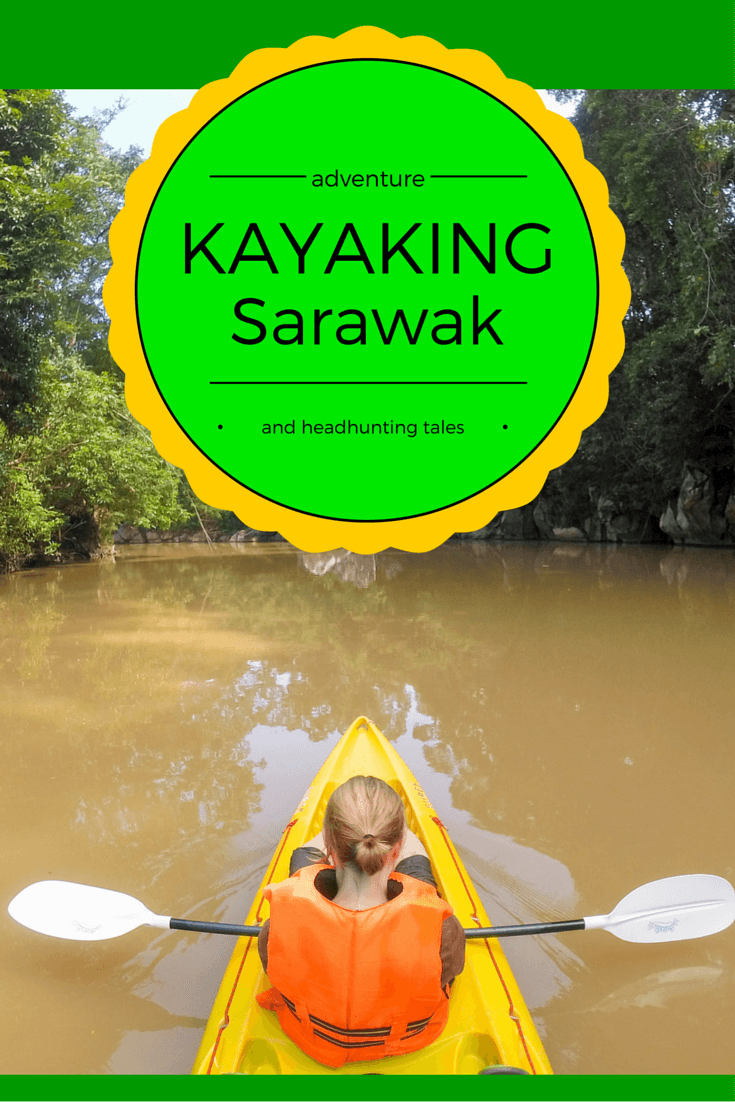 Best View of the Petronas Towers? The Retreat KL!
Next Post: Winter Wonderland in Lombardy