After the heat and craziness of Prague, we realised ho much we missed nature. So, it was time to hit the great Czech outdoor spaces, and we decided to spend three days in the forest of Česky Raj with the amazing people of Czech Adventures.

I couldn’t move. I was standing on a branch, trying to reach with my hands another branch of a 27 meter high pine tree, but it was too far. I tried standing on tiptoes – couldn’t make it.

I thought about giving up. The tree felt unstable. I know how to climb on rocks, but trees are a different story. They’re alive. They sway, wobble, move. Rocks do what you want – but on a tree, you’re only a guest.

Iliana climbed above me, as nimble and agile as a squirrel. ‘You can make it, Margherita!’ she shouted at me in Spanish. I followed her and found a branch on my left hand side. It was much closer – I pulled myself up and kept climbing.

Our friends from Czech Adventures

Where was I, and what the hell was I doing? Let’s rewind a little bit. We were in the forest of Česky Raj (Czech Paradise) National Park, guests of Mikkel, Louise and Iliana from Czech Adventures. But there’s a big difference – we weren’t working with a brand. We were staying with friends. We met on Twitter a few months back, and immediately got along because of our love of nature, adventure and life outdoors.

I’m firmly convinced that every single one of us has a wild spirit. I imagine it to be like fire. Some of us have a tiny flame, dimmed by fear, routine and city life.

For others, the wild spirit is a raging, roaring bushfire, overwhelming their whole being, making existence in cities impossible. Some thrive when they’re in the wild – like Mikkel, Louise and Iliana, for example.

Hailing from Denmark, Mikkel and Louise moved to a wooden house in the Czech forest two years ago. The urban existence of Denmark wasn’t ideal for them. Louise was often crippled by violent headaches, and Mikkel simply had enough.

For years, he had a dream of life in the woods, living in a house in like Paul Thoreau’s Walden, following the rhythms of nature and the sounds of the forest.

After we met Mikkel and Louise, it was hard to imagine them living in cities. Mikkel leapt on trees, climbed rocks and squeezed himself into tiny caves. The fire of his wild spirit gave him strength, courage and a good, healthy dose of recklessness.

Louise was beautiful with her sun-kissed skin and perpetual smile.

Iliana is Mikkel’s daughter and Louise’s stepdaughter. She was in the Czech Republic on holiday, and spends the rest of the year in Spain with her mother. We got along immediately, because we both spoke Spanish, and over the course of three days she became by dear little friend.

It’s usually hard for me to get along with children, but Iliana had a wisdom that went beyond her 10 years of age – the wisdom of a child who grew up close to nature. She was caring, sensitive and generous – a far cry from the spoilt urban brats I used to teach.

But back to the tree now. When Mikkel found and bought his dream house in the woods, the property came with a parcel of land that contained two huge pine trees. An eternal child and a dreamer at heart, he wanted to build a treehouse – and the first step was a platform atop the biggest and strongest tree of the two.

It took him a week to hoist planks of wood to the top, nail them to the tree and create the platform. He cut the dead branches off and only left the strongest ones, so close to one another that they actually form a ladder, reaching all the way to the platform 27 meters from the ground. A harness, via ferrata set and a rope with loops to hook the carabiners provides security.

I knew I was totally safe – nevertheless, climbing the tree was exhilarating and terrifying at the same time. Sometimes, the branches sloped down, making me feel in precarious balance. Other times, I hooked myself the wrong way around and found myself tangled in rope.

Mikkel and Iliana helped me, feeling totally at ease in their element, the wild.

I, on the other hand, was a lumbering sack of potatoes, clumsy and graceless. Sap fell in sticky globs onto my hair. My hands and fingernails were crusted with dried soil. My arms and legs ached – yet, partly for sheer stubbornness, partly because of my pride, I made it to the top.

And I saw the woods like the birds do, from the height of the treetops, where the humans below look tiny and insignificant.

When I got to the top I was shaking with excitement. I had never seen the world from above, not like that.

Not after having climbed on a fellow living being, feeling that we both belong to the present – through the movement of the branches, the wind making it sway left and right, especially when we got to the top and the trunk was smaller and suppler, yet felt safer – because I had learnt to trust the tree.

Our time with Mikkel, Louise and Iliana was a whirlwind of emotions. Earlier that morning, we barely had time to get off the bus in the Czech hamlet of Mala Skala that we were rappelling down a 30 meter high cliff – something we have done dozens of times while climbing in the Italian alps, but there, with different equipment, different people and different rocks, it felt strange and daunting.

Iliana came to my rescue. I followed her and learnt to trust the rope, and move my body in the correct way. From squirrel, she turned mountain goat, hopping over the rocks while pushing herself downwards with the rope.

She showed me how to rappel past overhanging rocks, when you’ve nowhere to push with your feet and feel like you’re hanging from your rope like a salami.

Iliana and I rappelled together, two, three, five times, while Louise secured us from the top and Nick took pics from the bottom. By the end, I was hopping over the rocks, too – I got to know that stack of sandstone, learnt where to put my feet so they I wouldn’t slide downwards, learnt how to hop so I wouldn’t be stuck hanging from the rope.

Yet, Iliana was always better than me. She possessed that grace of wild children, that we urban grown-ups can never hope to achieve.

The Czech Paradise is a magical place. It’s an adventure wonderland – kind of like Gozo, where you can go climbing in the morning and kayaking in the afternoon, caving after lunch and then hiking under the stars in the woods at night.

Opportunities for adventures are truly endless. Mikkel told us of their plans for winter – they will start leading cross-country skiing and dog sledding expeditions in the frozen forest, and for next spring they’ll partner with a local operator and start offering paragliding from the top of a nearby hill.

The following day, we set off together to discover more of the national park. Mikkel was keen to take us to some of his favourite places. The first was the River Kamenice, that he referred to as ‘the wild river’.

In spring, when its full of snowmelt water, Kamenice tears and rips through the woods, unearthing secular trees as if they were twigs – and taking the poor devils that dare venture too close to their death in the rapids.

In summer, especially during the dry and scorching summer of 2015, Kamenice wasn’t quite as wild. We walked along a trail following the river bank. Beams of sun filtered through the canopy, while the river flew right beside us – sometimes rushing over trees and rocks, sometimes not much more than a pleasant, bucolic bubbling stream.

Iliana showed us some weeds that curled up as soon as you brushed them with your finger, shooting their seeds into the forest. Then, Mikkel led us to his favourite place, where he sometimes sets up a zip line so people can ‘fly’ over the wild river.

Everything about Kamenice spelled peace. The sound of the water rushing through the rocks was gentle, almost meditative. The sun was warm and kind, not harsh and scorching like in town.

Birds tweeted, butterflies and bees flittered around us. I swatted a bee that was particularly annoying. ‘These bees are nice, they won’t hurt you’ said Iliana.

Normally, that would have been a day-long outing, Mikkel explained. ‘Walk along the river, have a picnic, play on the water if the river allows – otherwise, fly over the river on the zip line, tiptoe over a fallen log… The opportunities are endless‘. But Mikkel was eager to show us more of his paradise. ‘These caves… You won’t believe how cool they are’ he said, leading us back to the car.

Less than an hour later, we were walking to the top of sandstone pillars, one on the southernmost stretches of the area known as Bohemian Switzerland. Earlier this year, we had visited Saxon Switzerland near Dresden, a similar wonderland of sandstone towers rising out of the forest.

The Czech counterpart bore some uncanny resemblances to Saxon Switzerland. Not only were the rocks, mountains and forests similar – also, a castle was built using sandstone pillars as towers, with bridges in between, just like Bastei in Saxony.

And the views from the top of the sandstone rocks were just as amazing. We saw hills stretching to the horizon, covered with forests from where sandstone rocks popped over the treetops like mushrooms, while all around the sky was turning golden, sunset approaching.

Near the castle was a big cave, well known by locals. You didn’t need equipment to get in, but we did need to crawl on our bellies to get through the tiniest passages until the furthest room, where someone had placed candles that twinkled in the darkness.

The bowels of the rock were chilly, damp and silent, the floor covered with mounds of sand. The cave was daunting and nurturing at the same time. It was an ancestral, irrational feeling. Caves protect us from predators – but caves can also become tombs.

Mikkel wanted us to see some of his ‘secret’ caves, that he had discovered only a few weeks before. We followed him through cracks in the rocks, crawling through tunnels so tight I had to scoop sand away, or my hips wouldn’t fit. There wasn’t much to see – it was twilight outside, and inside the darkness was total. It was all about the feeling of being there, deep into the rock, in a place where living beings rarely venture.

We crawled out into the night, my clothes in tatters, my sap-crusted hair now covered with sand, and made our way back to the house in the woods. Iliana pulled me aside and whispered in my ear ‘When we get home, let’s make pancakes for everyone’.

Normally, we would have a disclaimer here. We were hosted by such and such, thank you, all opinions are our own. But Mikkel, Louise and Iliana didn’t just host us – they opened their home and hearts to us. Thank you for the great adventure, from the bottom of our hearts. 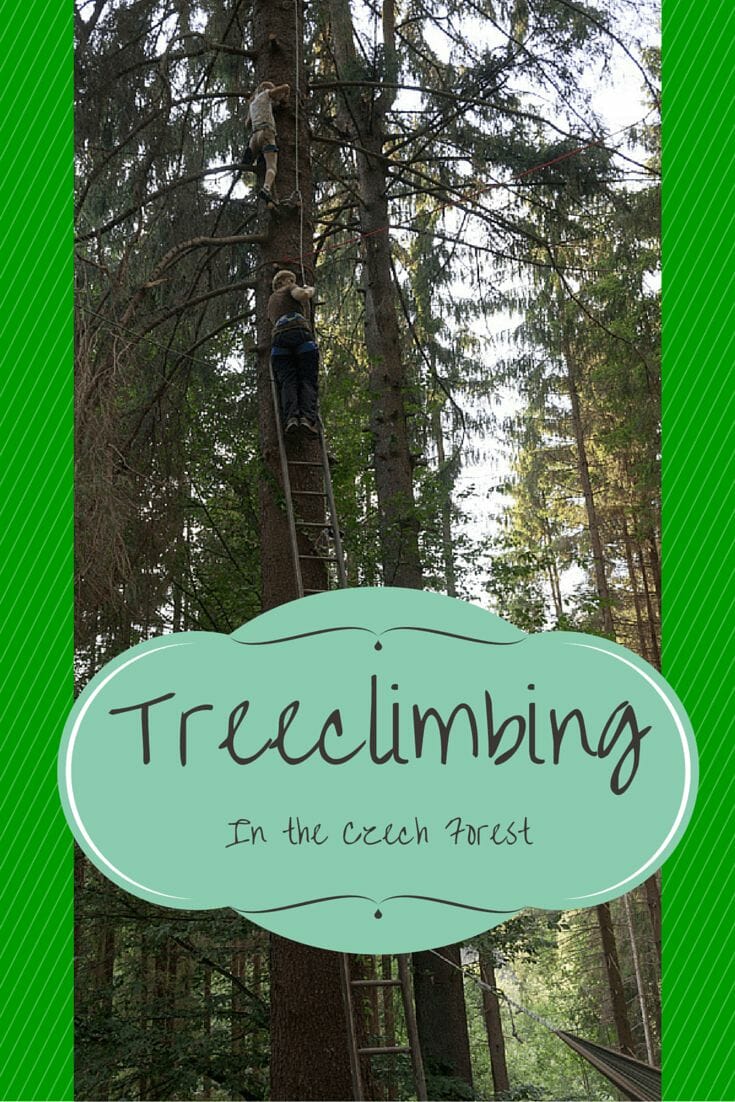