Have you ever heard of the Essequibo River, one of Guyana’s three great rivers? A day trip along this river is a great way to explore the history and nature of Guyana without having to travel far from Georgetown!

Guyana means ‘The Land of Many Waters’, and the reason behind this name becomes immediately clear when landing in Georgetown, the country’s capital. The city is surrounded by water on two sides – on one, there’s the Atlantic Ocean, the colour of milky tea, and on the other there’s the mighty Demerara River, spanned by a single floating bridge.

Yet, looking at a map of Guyana, the Demerara pales in comparison to the Essequibo, Guyana’s largest river, a 630 miles behemoth that runs from its source on the Brazil-Guyana border, through rainforest and savannah, all the way to the coast, where it flows into the Atlantic Ocean.

Looking for reasons to visit Guyana? Check out our 14 reasons why Guyana is South America’s best kept secret post!

The estuary of the Essequibo River is only 21 km from Georgetown as the crow flies, making it an easy and fun option to get out of the city for one day, especially interesting for those who love history and nature.

Our Essequibo river tour was planned for the day after our return from the week-long crazy adventure around Lethem and the Rupununi savannah in Southern Guyana – the idea of spending a leisurely day on a boat journeying along the river, surrounded by the notes of reggae music and steel drums, sounded very good indeed.

Essequibo river tours typically start from Parika, a port town on the banks of the river, about one hour drive from Georgetown. Before reaching Parika, it’s necessary to cross the Demerara Harbour Bridge, the fourth longest floating bridge in the world, and the only bridge across the Demerara river.

Make sure you check the Demerara Harbour Bridge website for scheduled closures – the bridge is 40 years old and due to the intense traffic across it, it is closed for one hour and a half each day, sometimes in the morning, sometimes at night, sometimes in the middle of the day.

The day we visited, the bridge closed at 7, and we crossed it exactly at 6.58 am! We reached Parika bright and early, and after a quick tour and breakfast overlooking the local market, we jumped on a colourful boat, bound for the first destination of our tour.

The day started out bright and sunny. Puffy clouds travelled across the clear blue sky, lending an azure hue to the khaki-coloured waters of the Essequibo River. The estuary, where Parika is located, is about 20 km wide – however, it is hard to marvel at its sheer size as it’s full of islands, some larger, and some only a few dozen meters across.

We all wondered how many islands are there in the Essequibo River. Our guide told us that the exact number is 365, and that the largest of them, Hog Island, is larger than Barbados – we travelled along it for quite some time, but I suspected his statement was a slight exaggeration. (Spoiler alert – it was indeed! Hog Island is only 60 square km, while Barbados is over 400).

We also learned that the Essequibo River is named after Juan de Esquivel, a Castillian seafarer and explorer who accompanied Christopher Columbus on some of his voyages to the West Indies. Esquivel never actually visited Guyana, but his ships did – the first recorded European journey to the Essequibo river dates back to 1499.

A few decades later, the famous explorer Walter Raleigh explored the river, searching for the legendary kingdom of El Dorado. However, the Dutch were the first colonisers to establish permanent settlements in what is now Guyana – the first colony, initially named Nova Zeelandia before becoming known as Essequibo, had its centre along the river itself.

Do you love nature and horse riding? Here’s my post about our adventure horse riding in Guyana at Saddle Mountain Ranch!

The Dutch also built forts on three islands on the Essequibo River – one of them, Fort Zeelandia, was the first stop on our tour along the river. The fort is only a couple hundred meters from the stelling, the ferry pier, via a brick walkway lined with the houses of local residents.

Stelling is actually a Dutch word, still widely used along the rivers of Guyana – an example of how colonial heritage remains in language, even hundreds of years later.

Fort Island is still home to a few hundred people, mostly farmers, but the population is currently declining as people move out to seek employment opportunities elsewhere. We saw some beautiful houses, with lovingly-tended gardens full of flowers and plants, but also many houses that looked abandoned.

Fort Zeelandia dates back to the 18th century, and it was built by slaves in record time to house the Dutch troops stationed on the island. It was the second capital of the Dutch  Essequibo colony – the first one was located further upriver. Cannons were mounted on the side of the fort overlooking the river, but our guide told us that they were never used, as no shots were fired when the colonies passed from Dutch to English hands.

The armoury building is still in good conditions, with a low barrel-shaped roof surrounded by palm trees, while only the walls of the larger lozenge-shaped fort building survive.

On the other side of the island it’s also possible to visit the Court of Policy Building, including a former church now turned into a museum about Dutch colonial history, and a room where slaves used to be auctioned. Together, the two sites making up Fort Zeelandia are included in the UNESCO World Heritage Tentative List.

Our journey continued past the ‘Three Sisters’, three rocky islands in the middle of the Essequibo River, and past the sprawling holiday houses of Guyanese politicians and celebrities like Eddy Grant, the Guyanese born musician famous for the 80’s hit Electric Avenue.

We also sailed up the Mazaruni River, one of the Essequibo’s largest tributaries, until we reached Fort Kyk-Over-Al, the first to be built by Dutch colonisers in the early 17th century. Kyk-Over-Al means ‘see over all’ in Dutch, referring to the fort’s strategic position near the confluence of three major rivers – the Mazaruni, Essequibo and nearby Cuyuni.

Unlike Fort Zeelandia, where the cannons were never fired, Fort Kyk-Over-Al changed hands several times – from Dutch to British to French to Dutch again. About 100 years after its construction it became too small to fit all its residents, so it was demolished and its bricks were used to build a nearby sugar mill. Nowadays, only an arch survives.

Our next stop was supposed to be Baracara Falls, but by then the weather had taken a turn for the worse – we were right at the start of the coastal rainy season, and an afternoon shower was in full swing.

We opted for a walk around Bartica instead, a town built right where the Mazaruni flows into the Essequibo. Bartica is famous for the Easter Regatta, a river festival including boat races, a pageant, concerts and more. Not far from Bartica, we noticed some boats marked as ‘Prison’, moored in front of Mazaruni Prison, a penal settlement founded in the 1840s, and still housing convicts.

Resorts on the Essequibo River

The Essequibo River is also popular weekend destination for Georgetown locals, looking for an escape from the big city. Many of the Essequibo river islands are home to resorts – an example is Saxacalli Island, not far from Fort Island, where an eco resort is currently being built, and Sloth Island, covered in forest, where the namesake critters are often spotted.

These resorts are sometimes used as an overnight escape, or just for a day trip – since there are no beach resorts along the Atlantic coast, the Essequibo River is the best option to spend a day swimming and relaxing. Other activities offered in Essequibo river resorts are kayaking, nature walks around the jungle looking for sloths and monkeys, paddle boarding, fishing and birdwatching.

One of the most famous resort along the Essequibo River is Baganara, located on a small island near Bartica. We reached the resort right in the middle of the afternoon rain and instead of spending time swimming, lying on the beach and exploring the island, we played table tennis and enjoyed lunch and a few Banks beers.

On the way back, we all sat on the boat and dozed off while we zipped over the waters of the Essequibo river. We stopped briefly to look at a red-faced spider monkey with a baby on its back hop from one tree to another, and then again to photograph a large ship rusting on the river banks.

We arrived back in Parika just as the sun went down. The best sunsets are always the ones that follow a big storm, and so we stopped at the stelling for a minute, watching the light change from deep apricot to carmine and then mauve, until the stars started to shine over the Essequibo River.

I was a guest of the Guyana Tourism Authority during my visit. We would also like Caribbean Airlines for their kind assistance, and Inmarsat Global for allowing us to stay connected in Guyana! 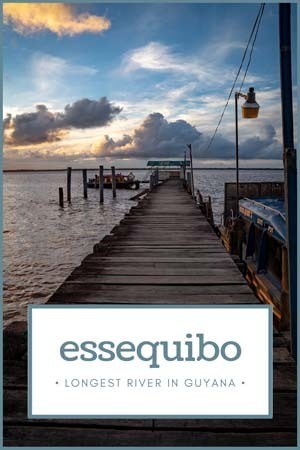 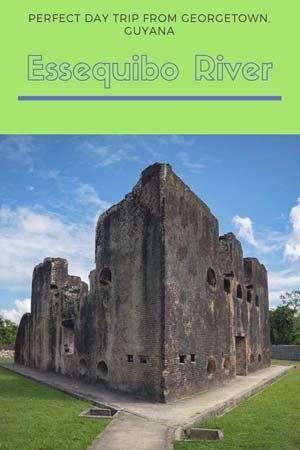