Our #EverymansFinland trip continues! After Porvoo and Sipoonkorpi we headed to the Finnish capital for our week as Helsinki Secret residents, and visited several Helsinki islands!

We love how nature and the city exist side by side in Helsinki – there are over 300 islands in the archipelago and in 6 days we only managed to visit about 10, but we’ll be back!

Are you looking for great places to stay in the Finnish capital? Here is our selection of the best design hotels in Helsinki!

The Finns love nature. They retreat to it every chance they get – pretty much every Finn I know has a family ‘summer home’, simple wooden buildings immersed in nature, and spend as much time in it as possible, especially in the warmer season.

The Finnish love for nature is like the love for a family member. Nature is a companion, a refuge, an entity to respect deeply. In a country that shares such a strong bond with nature, it comes as no surprise that cities offer beautiful urban nature.

In Helsinki there are many places to escape the chaos – even though there’s really no such thing in Finland 🙂 – just to give you an idea, there are over 300 Helsinki islands, easily reachable from the city centre, that will make you feel away from it all. Here we have collected our favourites after 4 trips to the city, and added some local recommendations at the end.

Suomenlinna is often described as ‘the island you MUST visit in Helsinki’. In fact, it’s not an island – it’s a sea fortress, built on six islands of the Helsinki archipelago. Suomenlinna is a quick ride away from Helsinki port, and it is linked to the city with ferries running from 6 to 2 am – unsurprisingly, it’s a common tourist destination.

Suomenlinna offers a great mix of history, nature and culture. The sea fortress was built in the mid-18th century, when Finland was under Swedish rule. It was lost to the Russians in 1808, and then given to the Finnish navy in 1918, after Finland gained independence from Russia in 1917. In 1973 Suomenlinna was demilitarized and more and more people started moving there – nowadays there’s a community of 800 people that calls Suomenlinna home.

Most tourists visit the island’s museums and fortifications, and other historical sights including the tomb of Augustin Ehrensvärd, the founder of Suomenlinna, and Vesikko, the last Finnish submarine. For locals, Suomenlinna is a popular place for a picnic or a day outdoors. In summertime, young Finns often organize impromptu parties on the island, taking advantage of the vast open spaces, the sunlight and the 24 hours ferries.

Suomenlinna is a fascinating place that deserves a lot more than a quick visit to check out the historic sights. It’s a city within the city, home to a community of artists, young families and creative types. We recommend spending at least one night on Suomenlinna, to fully enjoy the island’s vibe after the tourists have left. Otherwise, if you’re looking for a place to stay, check out our 15 best Helsinki design hotels post!

Don’t miss a day trip to Suomenlinna in winter – it’s amazing in all seasons!

Vallisaari, the Most Biodiverse Island

Vallisaari is the new kid on the block in the panorama of Helsinki islands. It was opened to public visits only a few months ago, alongside with its sister island Kunikaansaari, linked to Vallisaari by a bridge. It’s located just next to Suomenlinna, and just like Suomenlinna it has a military past – fortifications were first built in the Russian period, when the island was called Alexanterinsaari (Alexander’s Island) in honor of the tsar.

A small community of military and civilian people lived on Vallisaari, until the last inhabitant left in 1996. Twenty years later, the island opened its doors to the public.

Vallisaari is a wonderful destination for a day trip – visitors can follow the 3.5 km long Alexander Trail, taking you through abandoned barracks including the massive Alexander Battery, a huge brick building that housed the tsar’s cannons and troops. Just before the bridge to Kunikaansaari, the trail passes a location called Kuolemanlaakso, meaning ‘the valley of death’, in memory of an accident in 1937 when thousands of kilos of explosives blasted across the island, killing eight people.

Vallisaari also offers the highest biodiversity in the Helsinki Archipelago, including bats, badgers and several species of birds.

Lonna, one of the Smallest Islands

Suomenlinna and Vallisaari can be visited with the ‘hop on hop off’ ticket offered by JT Line, also including a stop at tiny Lonna – a stop we would advise not to miss! Lonna has an interesting history – in the 19th century, during the time of Russian domination, the Tsar’s navy used the island to store mines. Military use continued all through post war time – first, the island was used as a mine-clearing base, and then to demagnetize ships.

Lonna is perhaps 100 meters across – if that – and there’s a cafe, two beaches and lots of nesting eider ducks, if you visit in spring. Ferries call at Lonna once every hour or so – when we stopped, the cafe was about to close and we spent an hour pretty much alone, surrounded by eider ducks, immersed in nature on the city’s doorstep.

Lammassaari, the Island of Birds and Sheep

Lammassaari is just a 20 minutes bus ride from Helsinki Central, but you may as well be in the deep countryside.

A canal divides the island from the mainland – cross it and you’ll find yourself lost in a sea of reeds and swamplands, with birds swooping over lagoons and the wind ruffling the reeds and the birch tops. Boardwalks built over the swamps and lagoons are the only way to cross the island – there are also birdwatching towers and hides on the way, where you can sit and spy Arctic terns diving into the water and ducks with their fluffy babies making their way across the lagoon.

On the southern part of Lammasaari there’s a small ‘village’ of summer cabins, where city-dwellers spend their summer weekends. Walk a little further and you’ll reach Kuusiluoto, another popular summer cabin location, also home to a small group of cute and friendly sheep. Make sure you close the gate as you enter Kuusiluoto, or else the sheep might escape!

Eastern Helsinki is not really a place that many people visit – it is perceived as a concrete-filled ensemble of 1960s apartment blocks, built when the city population boomed. What many people don’t know is that Eastern Helsinki is home to some of the best urban nature and islands in town – and that unlike Suomenlinna and up-and-coming Vallisaari, you’re likely to be completely alone.

Kayaking is one of the best ways to explore the islands off the shore of Eastern Helsinki. The awesome folks at Natura Viva lead kayaking tours every day (even in bad weather!) from their paddle centre in Vuosaari. The bay opposite the paddle centre is full of islands just a short paddle away. Some are really tiny, nameless rocks no larger than a dozen meters across and filled with nesting eider ducks and other seabirds. Other were much larger – we paddled around Malkasaari, one of Helsinki’s public ‘recreational islands’, where anyone can pitch a tent and spend the night thanks to Everyman’s Right, and Satamasaari, an island filled with summer cabins, still empty since it was early in the season.

We stopped for a break and a drink of sea buckthorn juice (oh so Finnish!) on the island of Kotiluoto, then continued around Villaluodot, three small public islands, and Loppikaari, a bird sanctuary.

Compared to the islands close to the central harbour, the Eastern islands had a much quieter feel. The water was calm and still, making us feel as if we were paddling on a lake. Seabirds drew spirals in their sky. Cormorants stood with their wings out to dry on the rocks. There was no sign that a capital city was only a short drive away – nature was everywhere.

Other Helsinki Islands Recommended by Locals

Pihlajasaari – Recommended by a lovely lady from Visit Helsinki

Pihlajasaari is a very popular island, due to its vicinity to the busy district Ruoholahti. It has the best sandy beaches in town, with a row of colorful changing cabins that have now become an iconic image of the island. There are also rocks offering great views over Helsinki and its archipelago, and a summer restaurant in a fin-de-siécle wooden villa.

The lady who recommended we visited Pihlajasaari (I’m so sorry I’ve forgotten her name!) got engaged on the island – we are so sorry we didn’t have time to visit, next time we’ll make it for sure!

Our guide Matteo named Vartiosaari as his favourite Helsinki island. The island is one of the largest and wildest in Eastern Helsinki, a great place to go for a run in summer, and to ski in winter. It is also one of the best locations in town to pick berries and mushrooms.

Matteo recommended Vartiosaari because of its nature trail that passes boulders, potholes, a church built in the rock, a fir and pine forest and a great view over the archipelago. The island allows you to enjoy Finland’s iconic landscapes (rocks, forest, sea and archipelago) within a reasonably short distance, just around the corner from the city.

Sadly, Vartiosaari is threatened by development and may soon cease to be the natural paradise it now is. Head there soon and tell us how it’s like!

Seurasaari – Recommeded by Eva, hiker, photographer and lover of the outdoors

Eva recommended we visite Seurasaari, a picturesque island that houses an open-air museum celebrating life in the Finland of yesteryear. There are wooden houses with traditional artefacts and people showing ancient crafts, hiking paths and lots of cute squirrels!

This is a tiny island off the coast of Lauttasaari, a larger residential island that I already mentioned in our Winter in Helsinki post. The peculiarity of Sisa-Hattu is that there are no bridges or ferries to get there – you need to wade through the shallow water! In early June it was wayyyy too cold to get there – but apparently, if you want to be alone, Sisa-Hattu is the place!

With over 300 islands in Helsinki, you can also find some excellent island restaurants allowing you to dine on excellent Finnish produce with a view of Helsinki’s skyline or archipelago, depending on where you’re sitting. Saari (meaning ‘island’ in Finnish) is a restaurant located on the island of Sirpalesaari, about 20 minutes walk and 5 minutes ferry from Helsinki’s city centre.

Saari is popular with tourists and large groups, but the food is excellent and the views of Helsinki at sunset even more so. We enjoyed a three-course dinner with a starter of ‘Archipelago specialties’ that included pickled herring, smoked white fish and nettle pancakes, a delicious juniper smoked salmon and a very interesting dessert – vanilla tar ice cream! Nick stated that ‘it tasted like licking the walls of a smoke sauna’ – but somehow, it was good!

Have you visited any Helsinki islands? Let us know your favourite in the comments!

We would like to thank Visit Helsinki for having hosted us as part of the Helsinki Secret project. All opinions are our own. 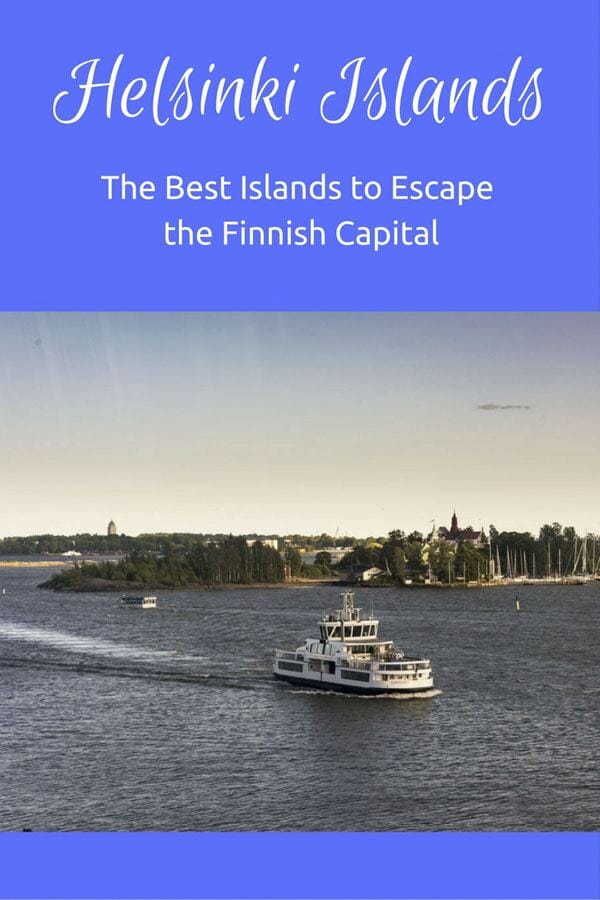 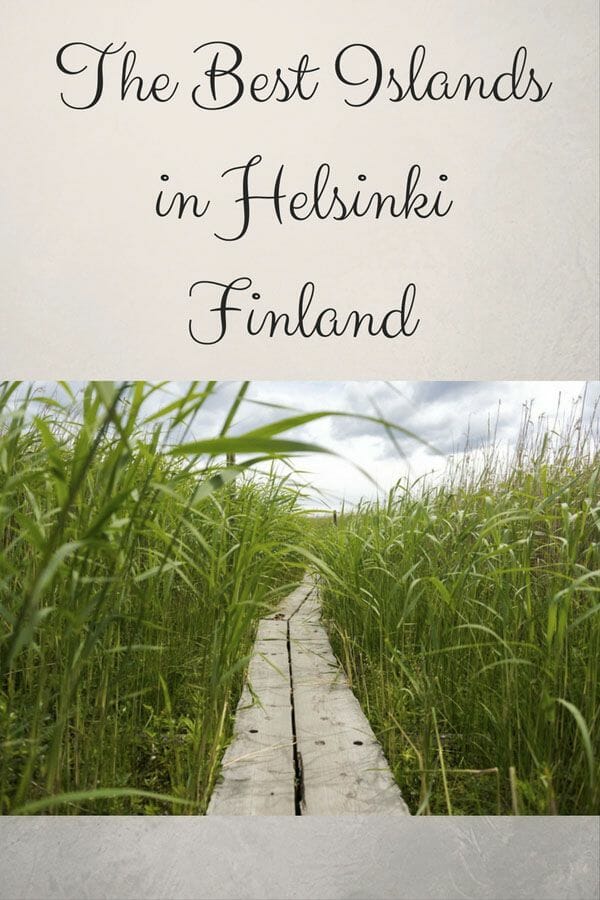