Are you planning to visit Colonia Roma in Mexico City? If so, don’t miss the best food tour in Mexico City – a three-hour exploration of modern Mexican cuisine with Tasty Bites Food Tour, from french-inspired pastries to craft cocktails and artisan ice cream!

When I was a kid, Mexico City was always at the top of the list of the largest cities in the world. It has since lost its record to other mega cities like Tokyo and Shanghai, but there’s one thing all huge cities have in common – they are not really one, but a collection of many entities, many realities.

This aspect is especially evident in Mexico City – the capital is a remarkably diverse place, made up of hundreds of neighbourhoods, many of which were once separate villages, like Coyoacan, Frida Kahlo’s former home. The vibe can change completely between one part of the city and another – for example, lovely and relatively safe Colonia Roma sits right next door to Doctores, which in the words of one of our guides is ‘a place not even I would venture into at night’.

As a result, choosing where to base yourself during your trip to Mexico City can be a tough decision. We opted to stay in Colonia Roma – similarly to nearby Condesa, Roma has a genteel, hipster-ish vibe, a booming food scene and lots of urban nature, all the things we usually look for when we travel.

Something that we always do when we visit a new city is taking a food tour – in Japan we explored the Tokyo street food scene and secret izakaya, in Sorrento we stuffed our faces with pizza and gelato and in Budapest we opted for a Jewish food and history tour. In Mexico City, we opted for the Colonia Roma tour with Tasty Bites, for one main reason – it didn’t involve tacos!

Now, don’t think I’m crazy – we love tacos. But since we would be having tacos pretty much every other day during our 6 weeks in Mexico and time in Mexico City (spoiler alert – we did), we figured it would be cool to try something different. Colonia Roma is full of eateries that put a modern spin on traditional Mexican food – exactly the kind of eating experience we were after.

Tasty Bites is owned by Rob, a friendly Canadian who fell in love with Mexico and moved there two years ago with his wife and son. Rob joined us on the tour, alongside Victor, a Mexican-American guide, chef and culinary school graduate.

Our first stop on the tour was for tamales – no, not the soggy, banana or corn-wrapped bunches available for a few pesos at all Mexican markets. We were sitting in a restaurant owned by a former chef at Pujol, one of Mexico’s most famous restaurants.

The tamale in front of us was wrapped in a chile ancho and the corn masa had taken on the deliciously smoky, moderately spicy flavour of the chile, and it was topped with tangy agua de tomate and chunks of chicharron, fried pork skin often eaten as a snack around Mexico.

Crispy tostaditas with homemade red and green salsa and jugs of iced guava flavoured agua fresca completed our first stop on the food tour. Agua Fresca is a popular drink in Mexico, made with fresh fruit juice, water and chunks of ice, usually sweetened with sugar syrup. It’s a delicious, refreshing drink, also available from street sellers on street corners.

The History of Colonia Roma

After the first stop, we had a 15 minute walk to get to the second restaurant – and Victor took the chance to introduce us to the history of Colonia Roma. The area was first built during the beginning of the 20th century, at the times of Porfirio Diaz, and it was meant to have a typical ‘European’ feel, with lots of leafy plazas and boulevards.

I asked Victor if the name ‘Roma’ was also a reference to Europe, but he replied that the origins of the name can be related to Romita, the name of an independent village that was incorporated into larger Colonia Roma. The neighbourhood started out as a home for the capital’s wealthiest citizens, before falling into disrepair throughout the second half of the 20th century – the coup de grace was the 1985 earthquake, causing widespread damage to the Colonia.

Afterwards, students and artists started to move in, and the area slowly started to be renovated back to its former glory – its now a very sought after place to live in Mexico City, but it still retains an edgy, creative vibe, which is exactly what makes it special.

Our second stop was a cafe, for a modern take on one of Mexico’s favourite street snacks – the torta, which is basically what in Italy we call panino, a filled crusty bread roll. The version we had was stuffed with carnitas, slowly cooked pork with a variety of spices and one of Mexico’s most beloved festive dishes, and served with red cabbage, pickled onion and rocket. We shared one roll, but we would have gladly had more!

If I were to choose my favourite stop in the whole tour, I would say it was the third one – a secluded restaurant with a beautiful terrace, where we enjoyed an unusual pairing of a craft cocktail with fresh fruit and sal de guzano (the ‘worm salt’ often used to cover the rims of glasses in Mexico) and super fresh snapper crudo, a less-marinated version of ceviche, topped with crunchy fried parsley.

That heavenly piece of fish, and the time we spent sitting on the terrace watching daily life in Roma go by, was worth the tour. Yet, our culinary exploration was far from over. We walked around Colonia Roma some more, passing beautiful street art and iconic buildings like the Casa de las Brujas, taking its name from its pointy roof looking like a witch’s hat.

A short walk through leafy squares took us to a modern Euro-style bakery owned by Elena Reygadas, one of Roma’s most beloved celebrity chefs. Their signature pastry filled with guava and ricotta was sold out for the day, but we got to try the lemon version, which was mouthwateringly amazing, and two dainty sweet rolls with romero (rosemary).

We were about to start feeling well and truly stuffed, when Rob and Victor led us to the next restaurant, an antique-filled eatery specialising in food from the Huasteca region, located along the coast of the Gulf of Mexico. We were served two iced melon agua fresca and a selection of crudités including jicama, a white root-like vegetable I never tasted before, which went very well with the selection of spicy salsas on the table.

I was thinking how good it all was, when the ‘real’ tasting appeared – chicken tinga bocole, thicker tortillas vaguely reminiscent of arepas, stuffed with shredded chicken in a spiced, tomatoey sauce. Delicious indeed – even though we were stuffed, we ate one each.

Then, we headed just around the corner to the last stop of the tour – ice cream, of course! Rob and Victor opted for an artisan producer serving a variety of iconic Mexican flavours like leche quemada and Oaxaca chocolate, but we were so full that we decided to go for two of the nieves (sorbets) – passion fruit and jamaica, made with hibiscus flowers and tasting like an iced version of the delicious karkade we had in Cairo.

After saying goodbye to Rob and Victor, we wandered Colonia Roma some more, admiring the tree-filled squares, the colourful buildings covered with street art, and taking in the relaxed, almost village-like vibe that felt so unlike the chaos of the city centre and the city’s big thoroughfares. That is why we love mega cities so much – because they always conceal secrets like Colonia Roma, a perfect escape without the need to leave the city.

We would like to thank Rob from Tasty Bites Food Tours for having welcomed us on this food tour! 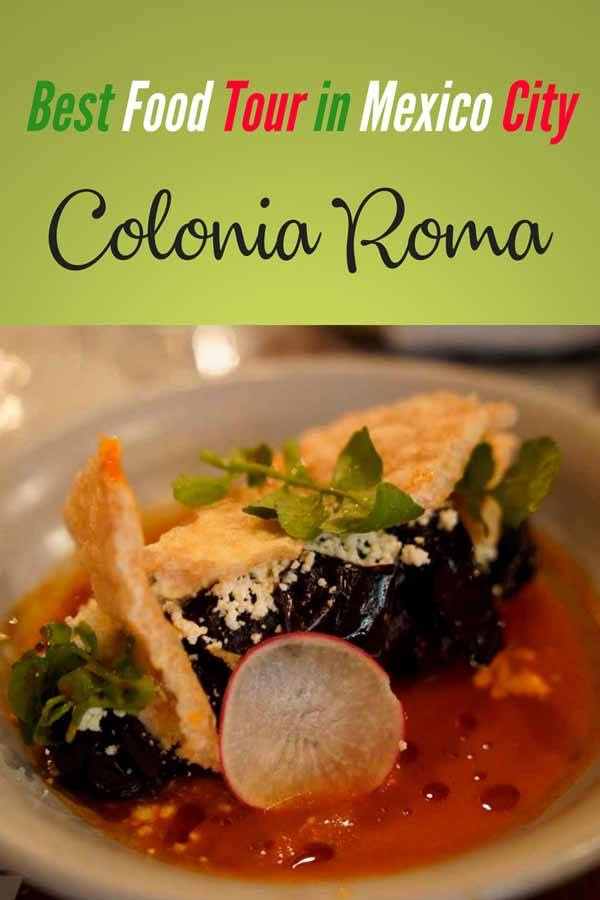 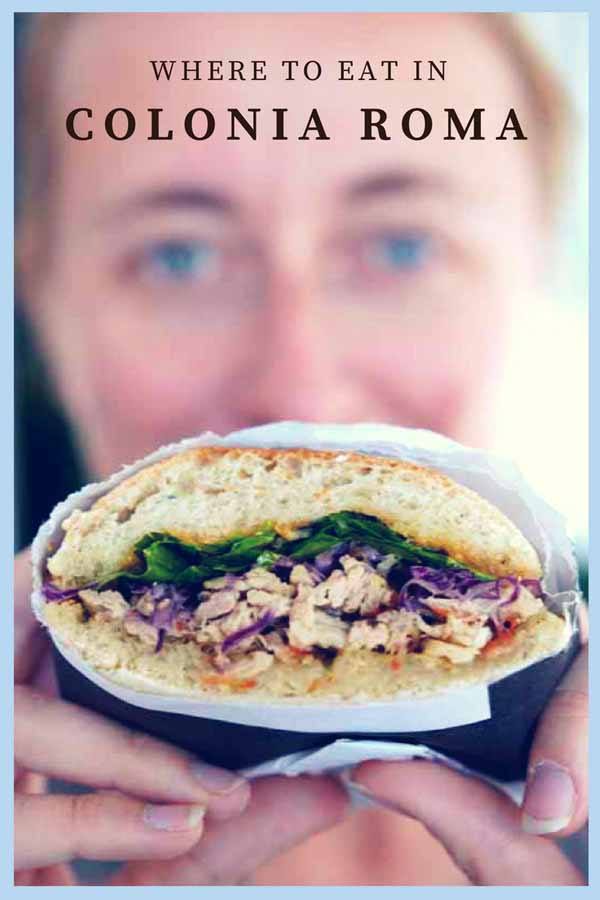 Drumheller, Alberta – The Dinosaur Capital of the World
Next Post: 7 Coolest Places to Visit in Calgary