Food was a huge part of our recent trip to Japan, so naturally we put our Kyoto foodie caps on and went off to visit Nishiki Market with Context Travel and Marcin, an awesome local guide!

Want to escape the crowds in Kyoto? Find out how in our post about Kyoto off the beaten path!

Kyoto and Tokyo are two complementary aspects of that complex and multifaceted reality that is modern-day Japan. Tokyo was bombed to the ground at the end of WW2, and it was rebuilt into a vast and sprawling city, with an eye to the future.

Kyoto, in comparison, is a tiny city of 1.5 million people, spared by Allied bombs during the war, and now preserving the atmosphere of old-time Japan. 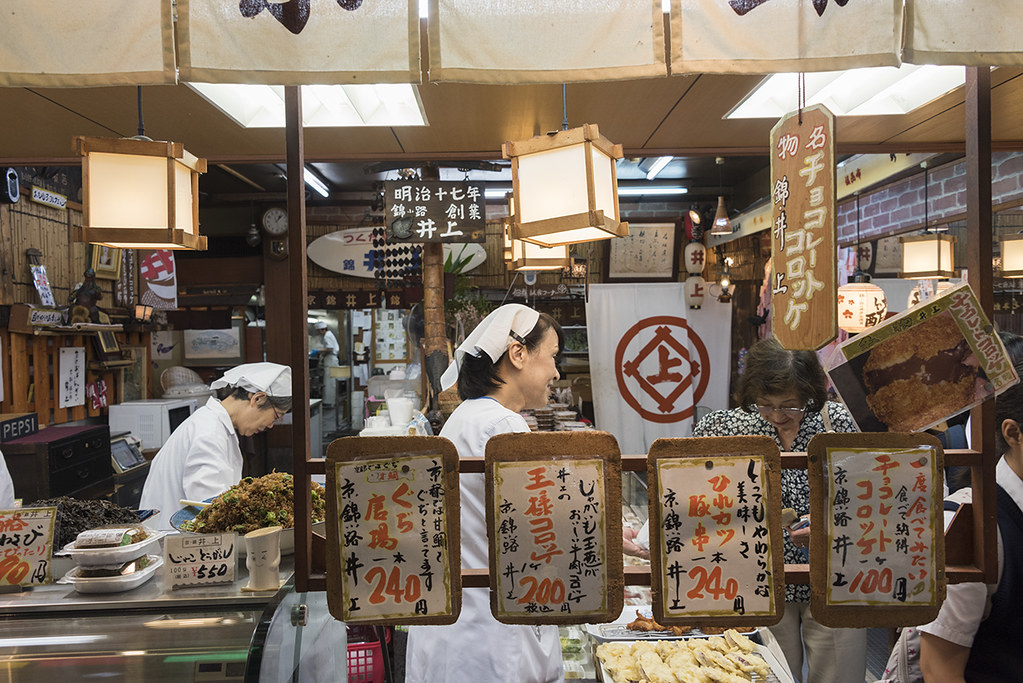 Much like anywhere else in Japan, both Tokyo and Kyoto are foodie paradises. Tokyo will amaze everyone with the sheer number and variety of restaurants – if you browse the various ‘best ramen in Tokyo’ lists available online, you’re unlikely to find the same place mentioned twice. On the other hand, Kyoto is known for its dainty vegetables and refined (and pricey) kaiseki cuisine – as stated in a CNT article, a Kyoto chef eloquently said ‘we don’t have the most, just the best’. 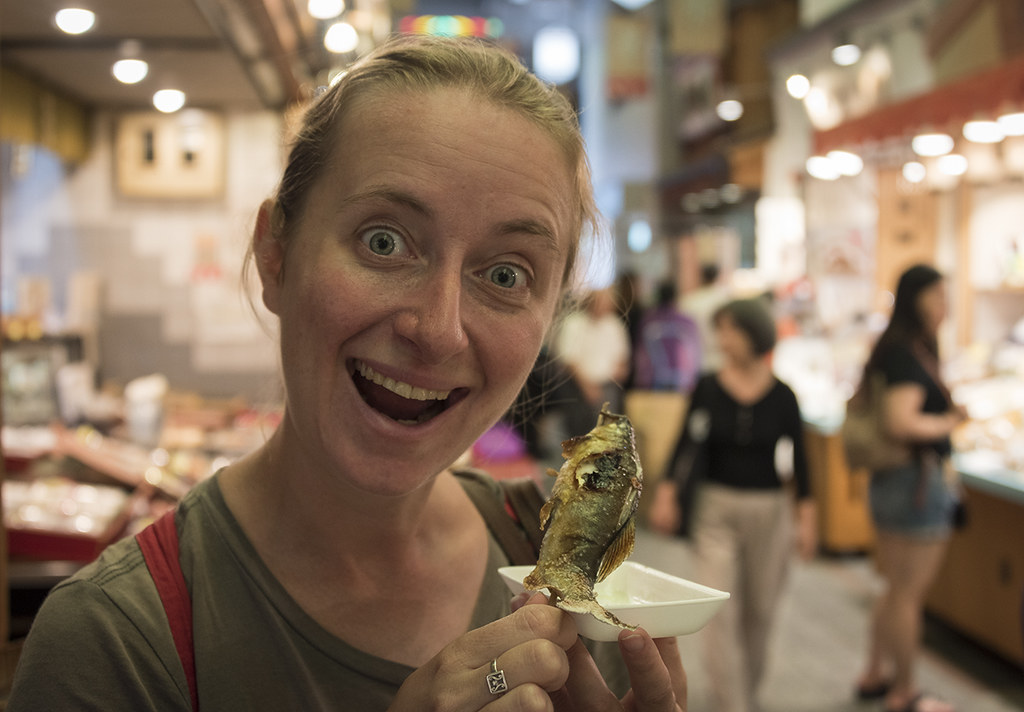 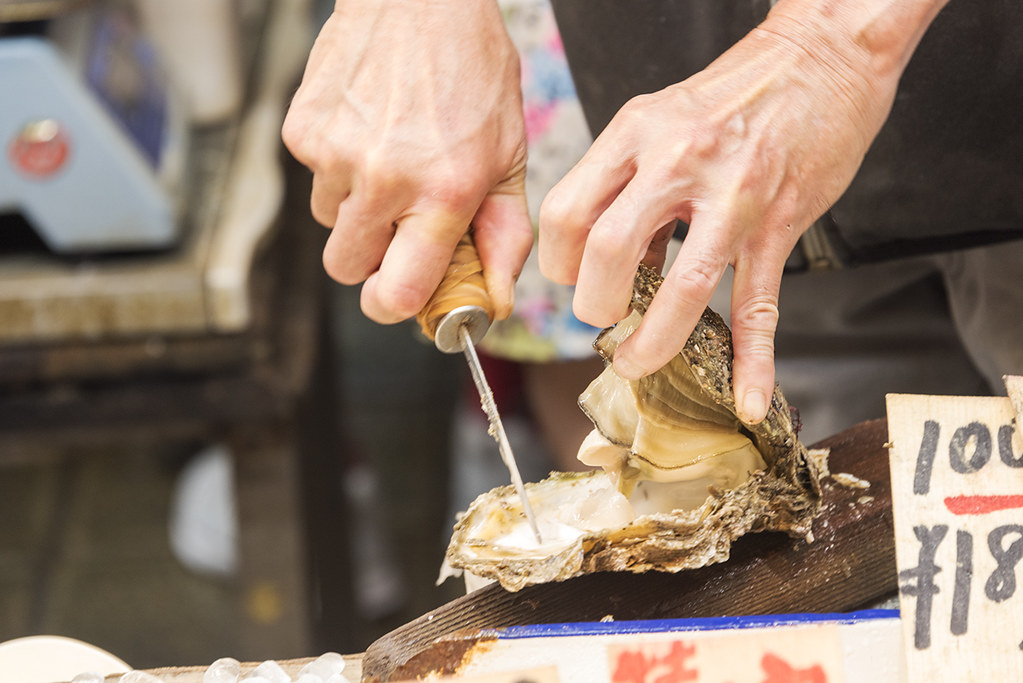 To explore the Kyoto foodie scene, the best place to begin is Nishiki Market, a covered arcade not far from the picturesque Gion district, where geisha and maiko still entertain clients every night. We chose to join a Context Travel Kyoto food tour around Nishiki market – if you follow us, you’ll know we are long time fans of Context Travel, even more so after having taken a wonderful tour of Anime Tokyo around Akihabara.

Our expectations were really high – and once again, we were not at all disappointed. 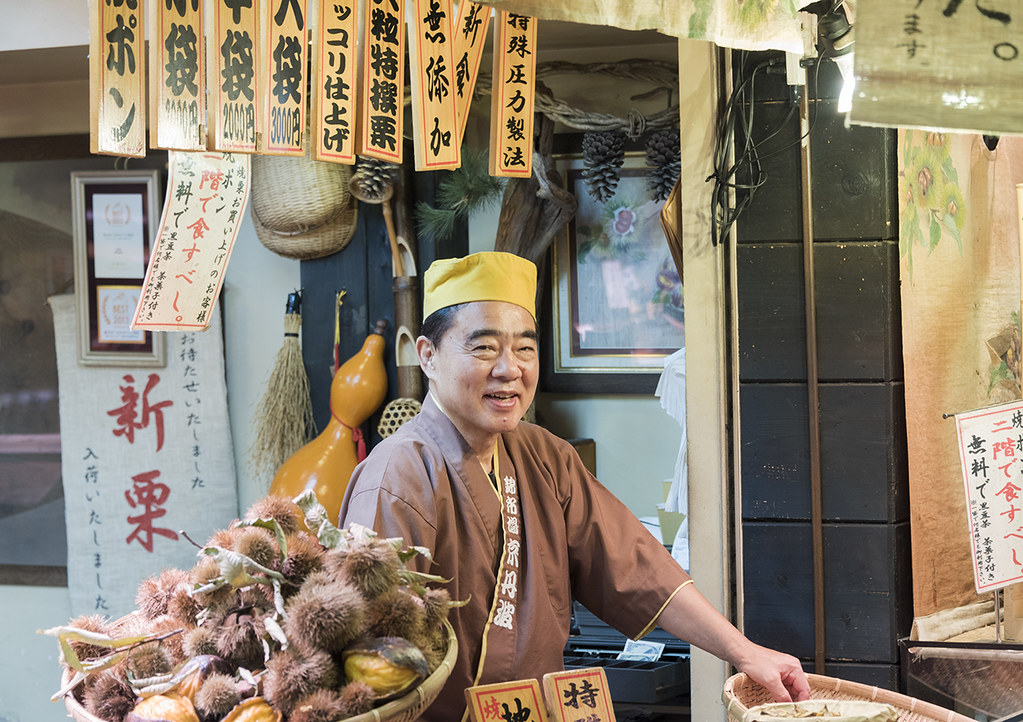 We met our guide Marcin just opposite the entrance of Nishiki Market. It was 10 in the morning, and shopkeepers were still setting up their stalls, arranging fruit and vegetables in wonderful displays. While we waited, Marcin invited us to visit the nearby Nishiki Tenmangu shrine, where locals often stop for a quick prayer in between daily errands. 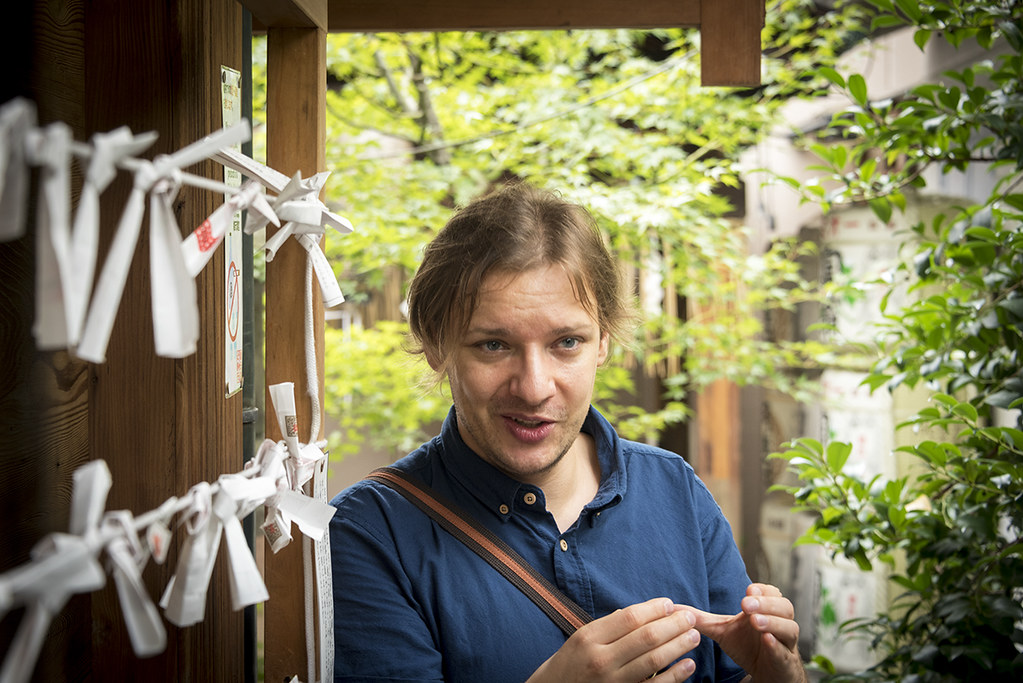 Marcin, a long time Kyoto resident, taught us how to pray. Every Shinto shrine has a water fountain, with long-handled ladles. Water is a symbol of purity – before approaching the altar, every devotee is supposed to rinse their hands and mouth with the holy water, and then run water along the handle of the ladle before placing it next to the fountain. Marcin told us that the water at that specific shrine is said to be one of the purest in Kyoto, coming from a well 100 meters below the ground. 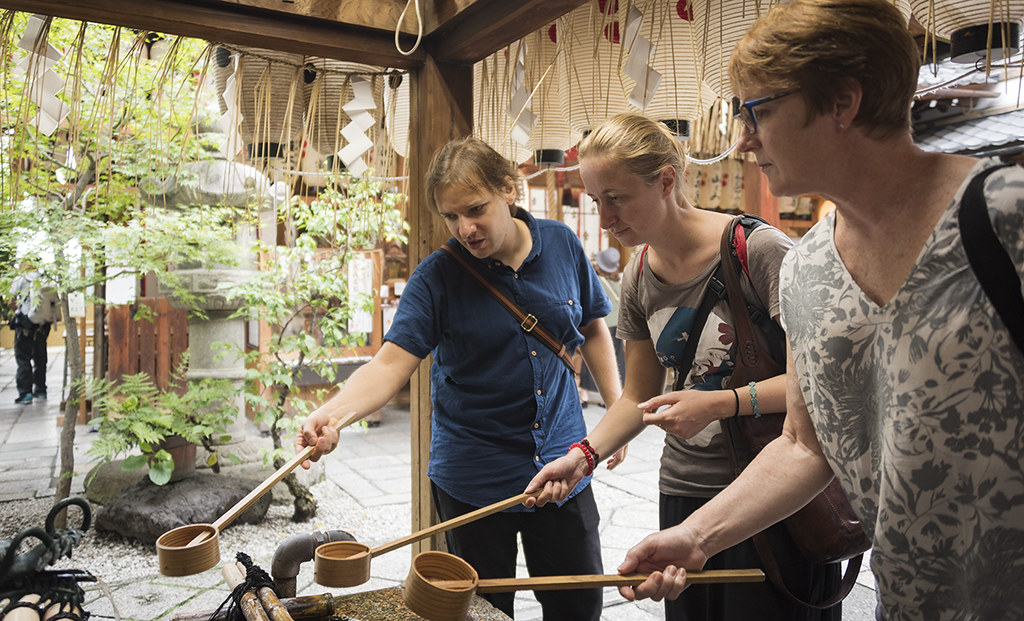 The shrine was dedicated to the spirit of Sugawara no Michizane or ‘Tenjin’, a scholar and politician who was made a deity after his death at the beginning of the 10th century. Within the walls of the shrine there was a reclined bronze cow with five dots reminiscent of a plum blossom. The dots are Sugawara Michizane’s family crest, and the cow is supposed to be the messenger of his spirit. The shrine is especially popular with students seeking help with their examinations, as Tenjin was (and still is) venerated as the deity of learning. 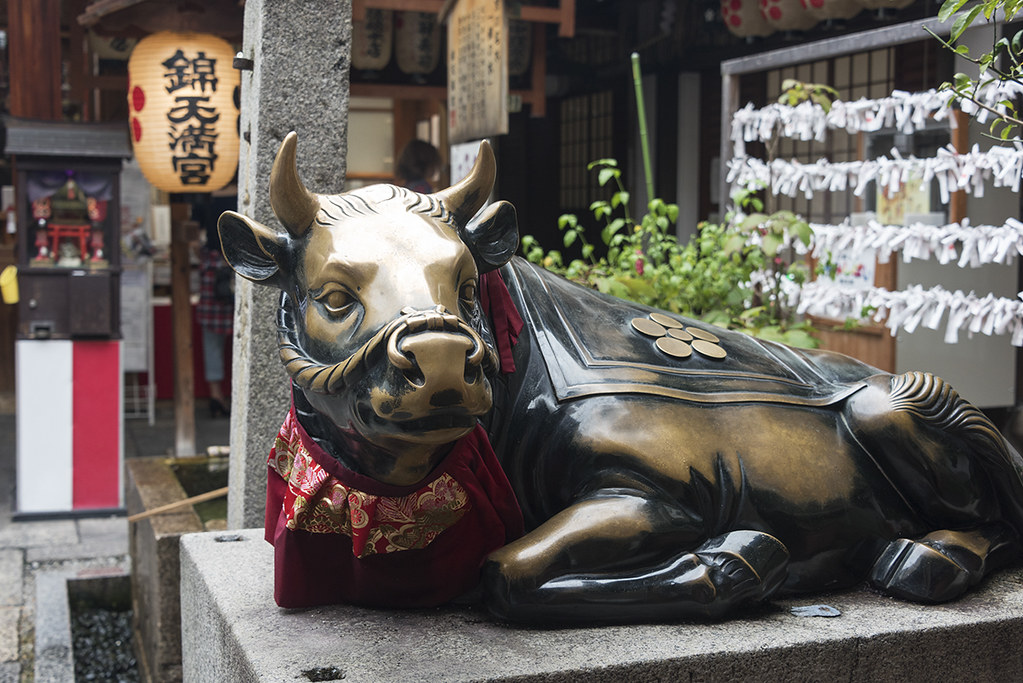 After the brief stop in the shrine, it was time to tackle the heart of foodie Kyoto and begin our tour of Nishiki market. I’ve been on several food tours, from as far afield as Sorrento, Bangkok and Barcelona – normally, the guide takes you from place to place, and tastings are already set and arranged before the tour begins. 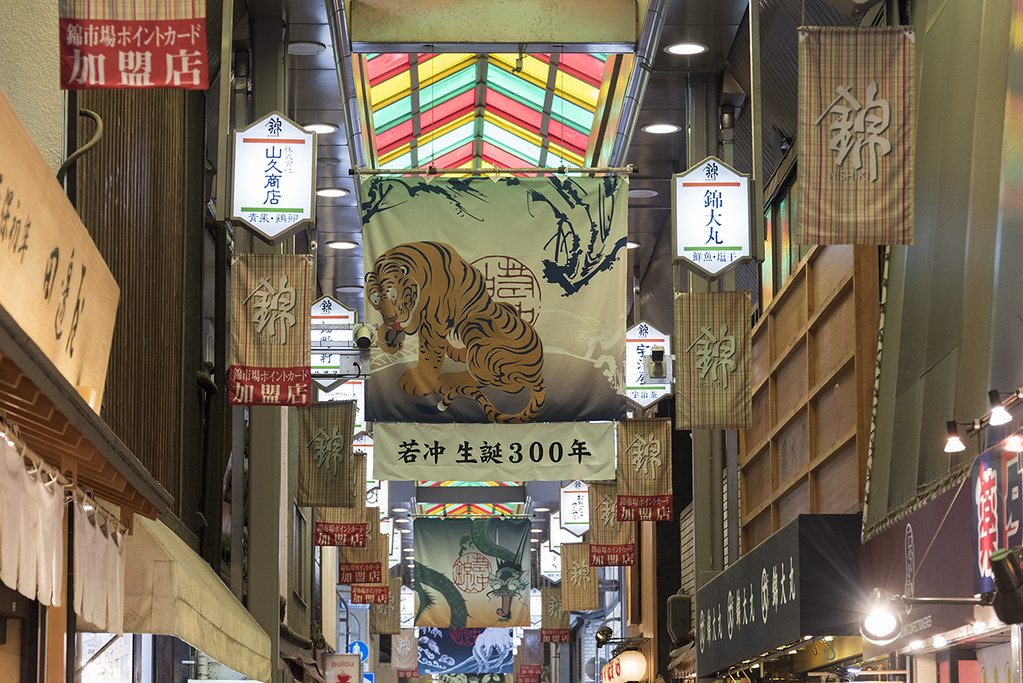 Context Travel food tours are managed a little differently – clients pay a ‘tasting fee’ in advance, and the guide handles this budget on the day given their experience in the culinary field and linguistic expertise. Participants are free to ask for a specific tasting if they see something that takes their fancy. The guide pays the shopkeepers for whatever products participants choose. There’s no rushing around, no set schedule to adhere to. At the end of the tour, the guide simply hands back whatever is left of the initial tasting fee – if there’s anything left, naturally. With so many tasty goodies, we only got back a couple of 100 yen coins!

My first thought as soon as we entered the market was that it was much smaller than I imagined. I thought it was going to be something like Tokyo’s Tsukiji market, with dark alleyways and forklifts laden with boxes zipping by and almost running you over. Nishiki Market was a bit like Kyoto itself – a treasure box of a market, with everything too beautiful to be true. 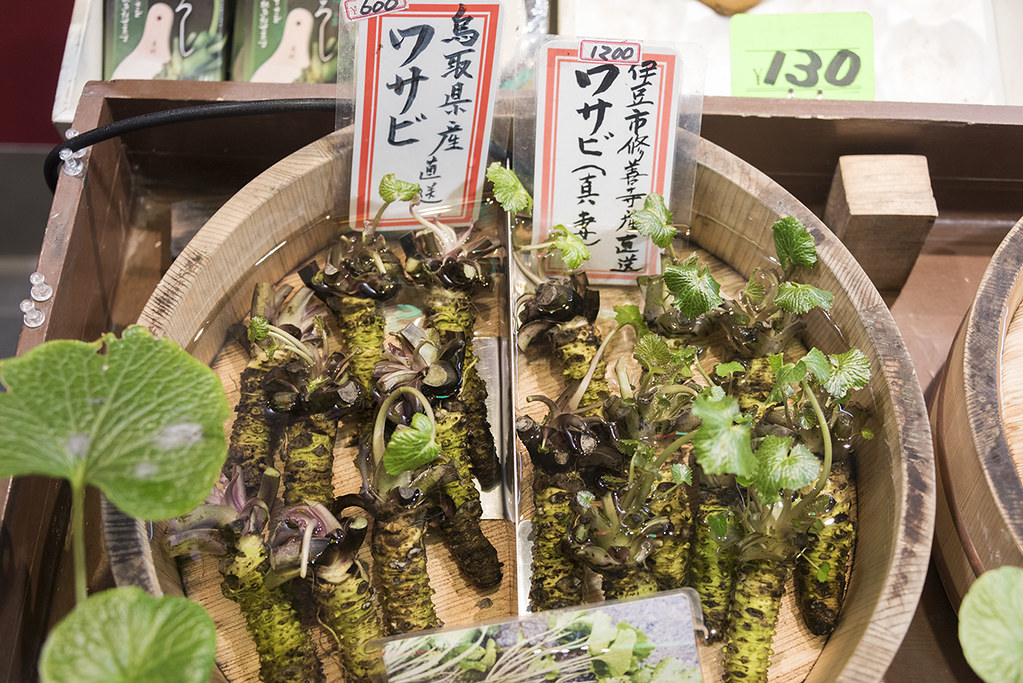 The first stop was a vegetable shop, with a counter full of glistening figs as big as fists, bunches of grapes in cardboard boxes, a vat of cucumbers on sticks and other beautiful-looking vegetables. All fruit and vegetables looked larger and plumper that what we’d ever seen – even more beautiful than produce in Milan street markets.

Marcin explained that it is because Japanese farmers prune heavily – so instead of five plums, you get one, but it’s as tasty as five plums all together. Price tags certainly seem to reflect that – a bunch of grapes was ¥2000, and a single fig was 350. Huge porcini mushrooms came in at a whopping ¥30,000 EACH – over $250! 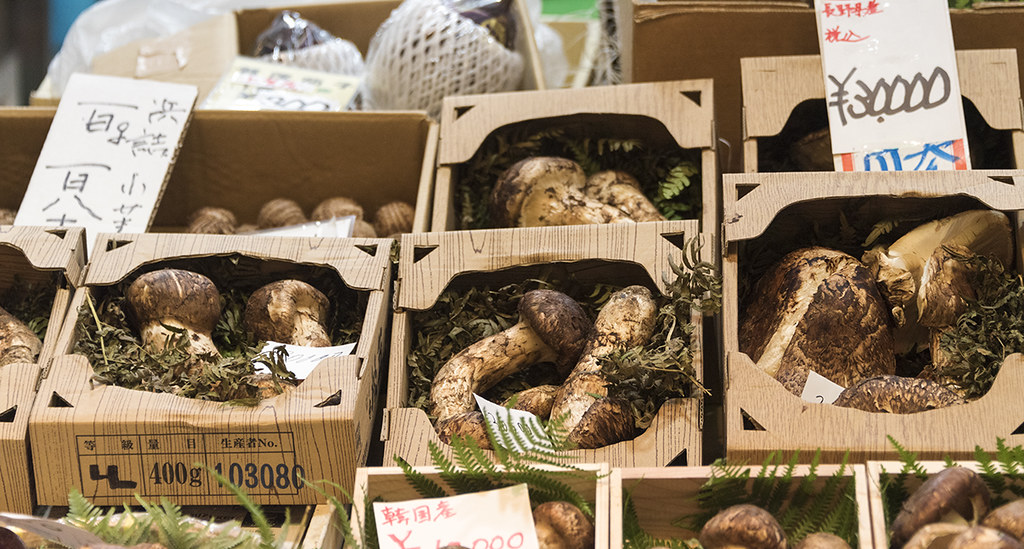 The Specialties of Kyoto Cuisine

Unlike several other Japanese cities where traditional food is meat and seafood heavy, Kyoto is known for its vegetable preparations. The reason is that there are several zen temples in Kyoto, and monks traditionally follow a vegetarian diet. Nishiki Market was no exception – there were dozens and dozens of shops serving tsukemono, the famous Japanese-style pickles, and the variety was just staggering. Samples were often on offer, and every morsel was a surprise – we tasted tangy umeboshi (pickled plum), daikon pickled in rice bran, bright yellow and bright pink pickles, pickled aubergine, and many more. 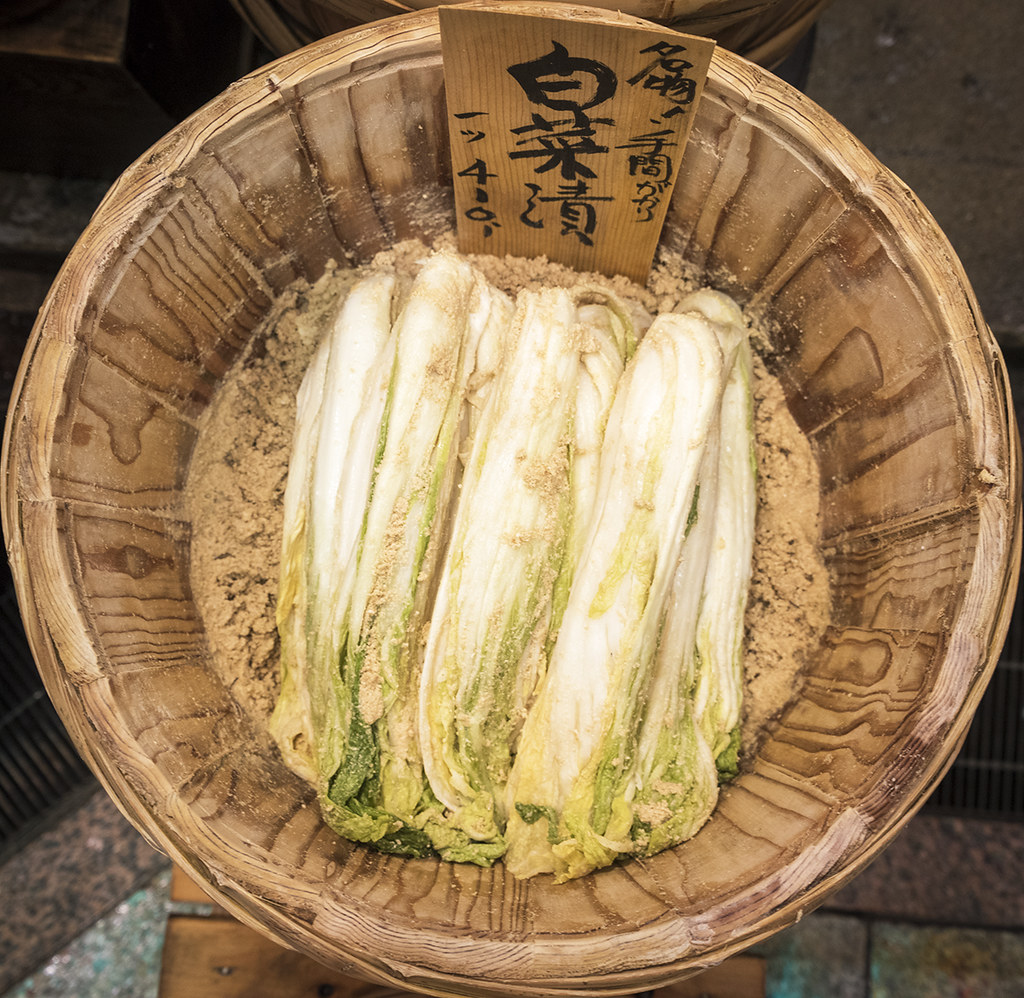 Most shops were dedicated to a specific kind of product. One was full of wooden barrels, each containing a different variety of miso – some light and delicate, others dark and punchy. Another shop just sold sesame products – from obvious sesame oil and sesame crackers to black sesame soft serve ice cream. 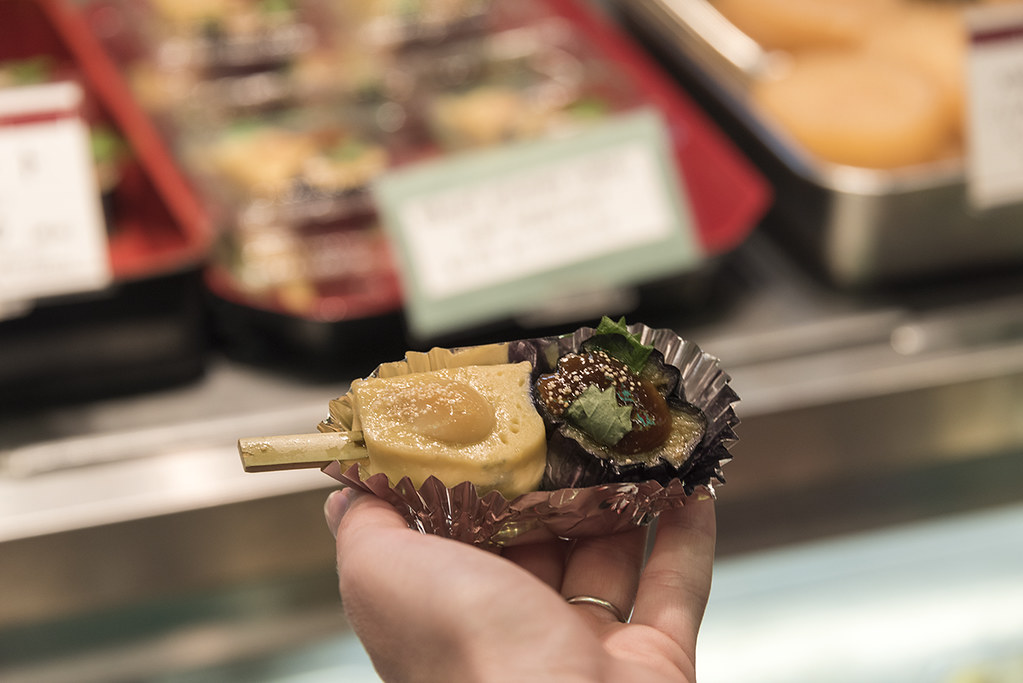 We also got to taste two kinds of products we had never tasted before – one is tsukudani, a specialty obtained by simmering seaweed, vegetables or seafood in soy sauce and mirin. The resulting flavour is very strong, and so tsukudani is served in very small portions. The shop had a row of different kinds of tsukudani in tiny ceramic plates – we tried kombu and mushroom tsukudani, and loved it, but we thought that dried fish tsukudani was a bit too strong for our liking. 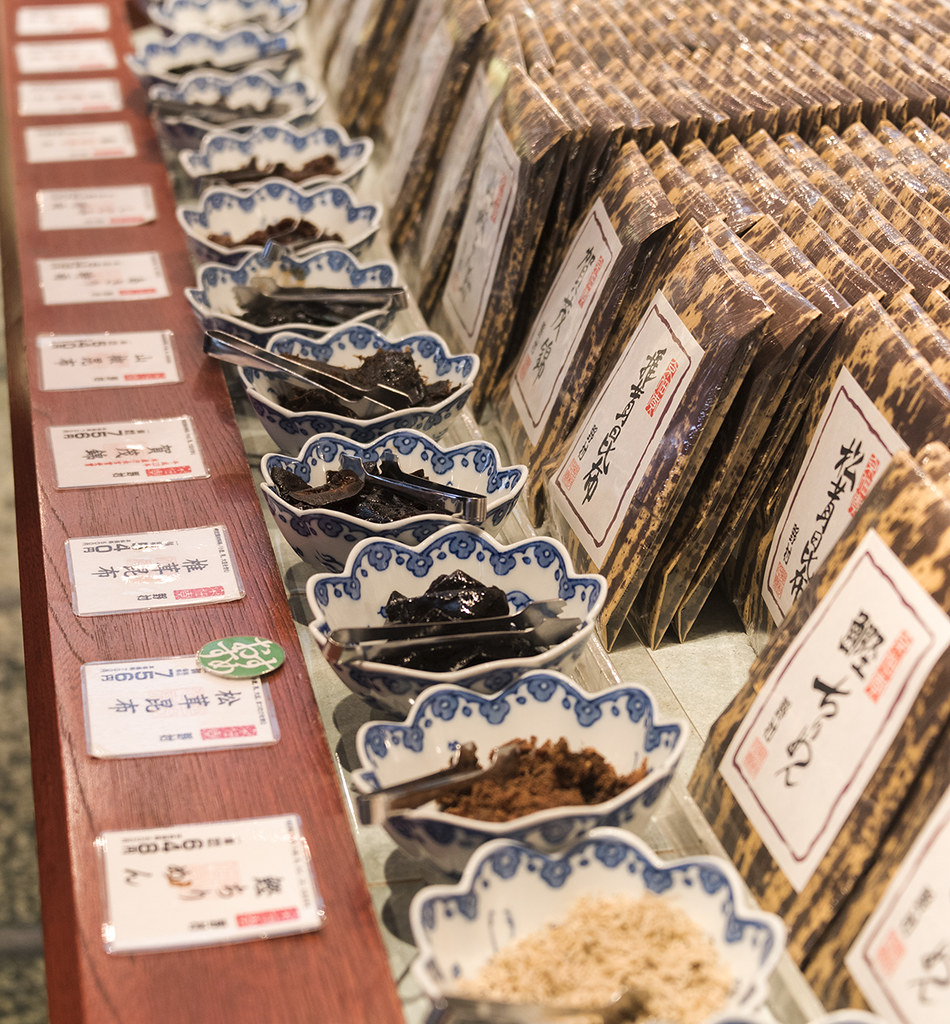 Warabi-moshi was another nice discovery – a kind of Japanese Turkish delight, a jelly made with wheat starch and rolled in matcha powder. The texture was really hard to explain. It was jelly-like, but so soft it almost melted in your mouth, and the matcha gave it flavour, since the jelly itself was all about the texture. 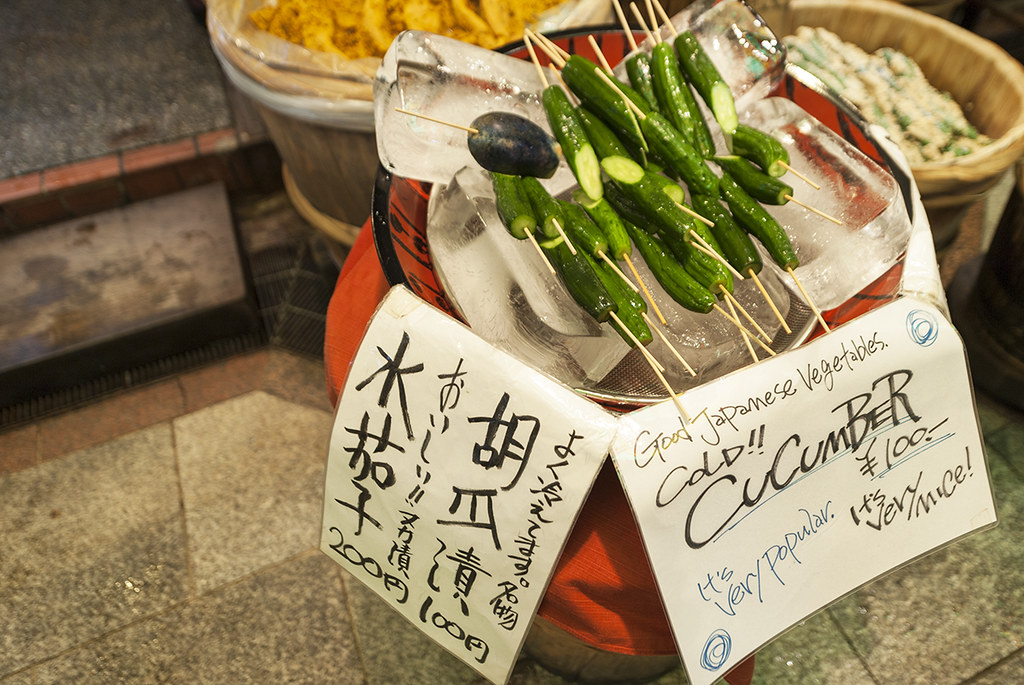 Naturally, the Japanese do cute food really well. I mean, check out tako tamago, Japanese for octopus on a stick – I almost wanted to keep it! The head is stuffed with a hard-boiled quail’s egg, making it even tastier. Having Marcin with us was a great help – when I saw bags full of cute butterfly and star-shaped thingies I immediately thought they were sweets and I was about to buy a bag, but Marcin told me they were in fact fu, ‘shapes’ made out of wheat gluten that indeed look very pretty, but don’t really taste like anything. 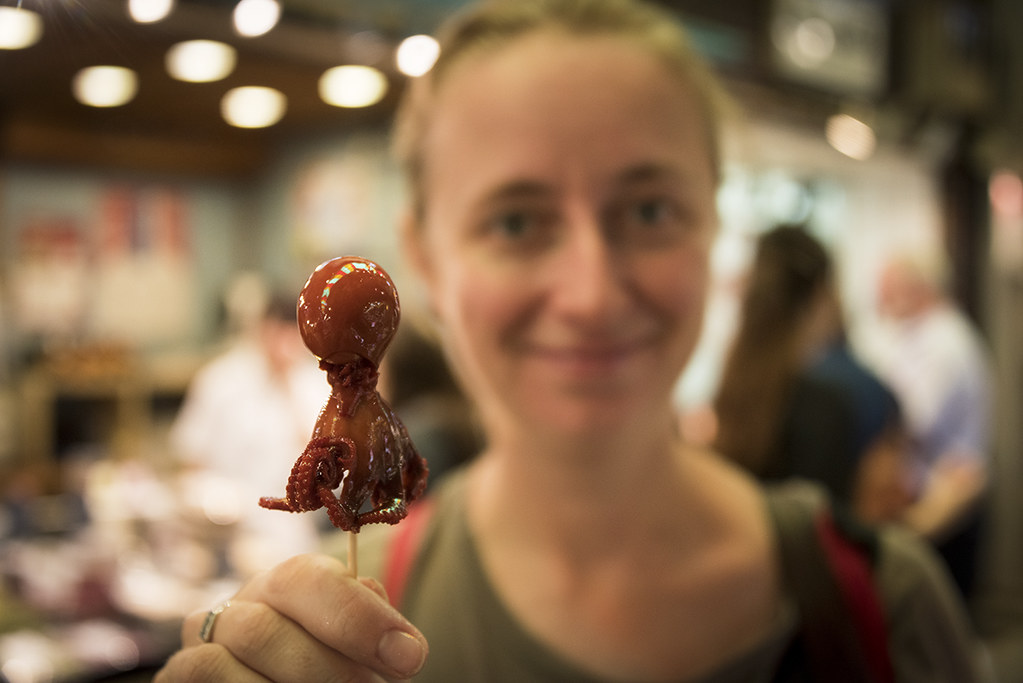 We also stopped at a shop specializing in yuba, or ‘tofu skin’ – a product obtained by skimming the surface of boiling soymilk, obtaining something similar to the film that forms over boiling milk. Yuba can then be enjoyed fresh, semi-fresh or dried, or used as an ingredient – we tried fried yuba donuts covered in maple syrup AND chocolate, yum! 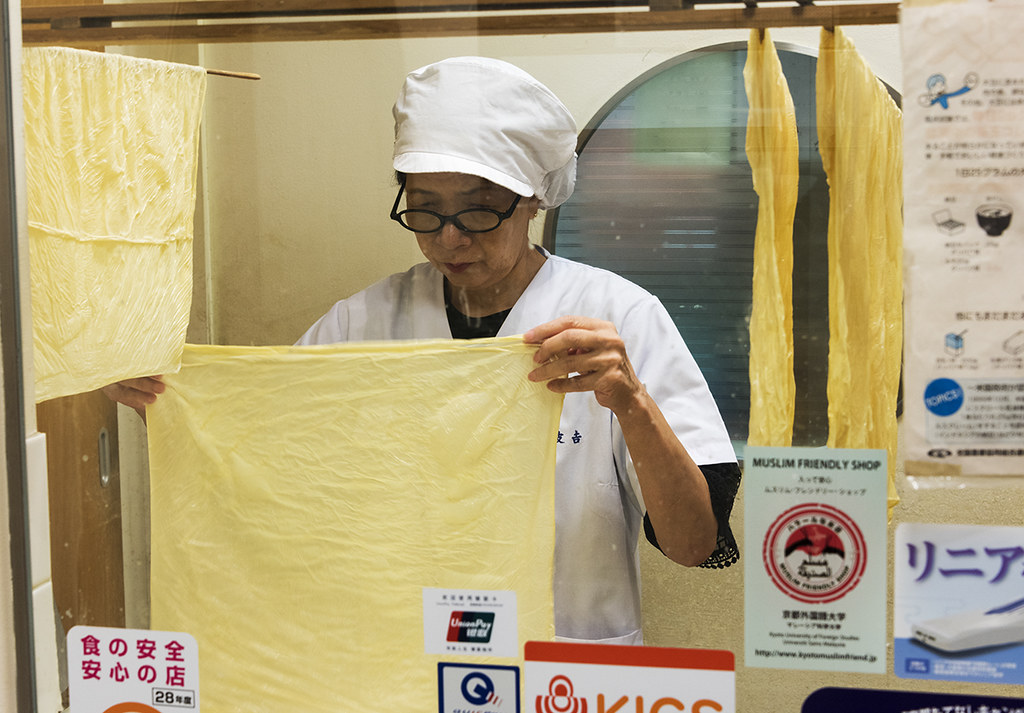 Another sweet product I was desperate to try and finally tasted in Nishiki Market was dango – if you’re curious to know how I found out about it, have a look at food emoji on your phone and you’ll see three colourful balls on a stick, one pink, one white and one green (matcha-flavoured, of course). It’s a chewy sweet made of sweetened rice flour, and I must admit the flavour won’t blow you away. 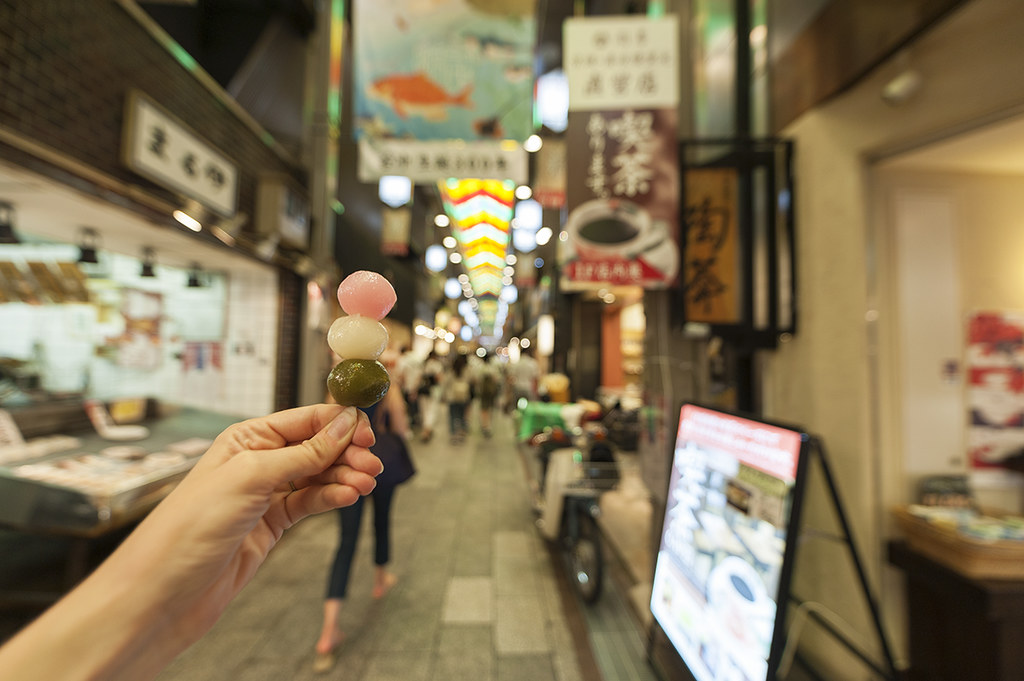 Even though food reigns supreme at Nishiki Market, there are also a few non-food shops. I bought some souvenirs in a chirimen shop, selling products made with silk crepe, and we visited Aritsugu, one of the best knife shops in Japan, owned by the same family for over 400 years. The selection of blades at Aritsugu was staggering, and they all came in right-handed and left-handed version, something that is rarely seen in the West.

After three hours browsing and eating our way through the market, the tour came to an end. Nishiki Market is only 600 meters long, so it may seem strange to spend three hours in such a small place – but the freshness and variety of food on offer was amazing. It felt like we were in a foodie Kyoto museum at times, and every single store was worthy of a visit. 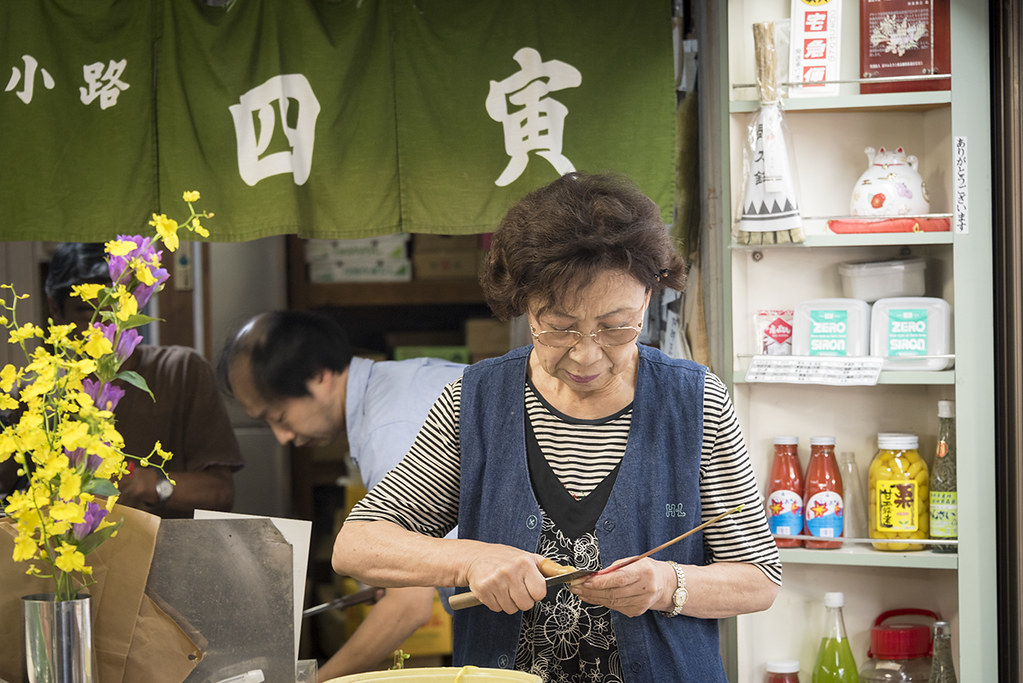 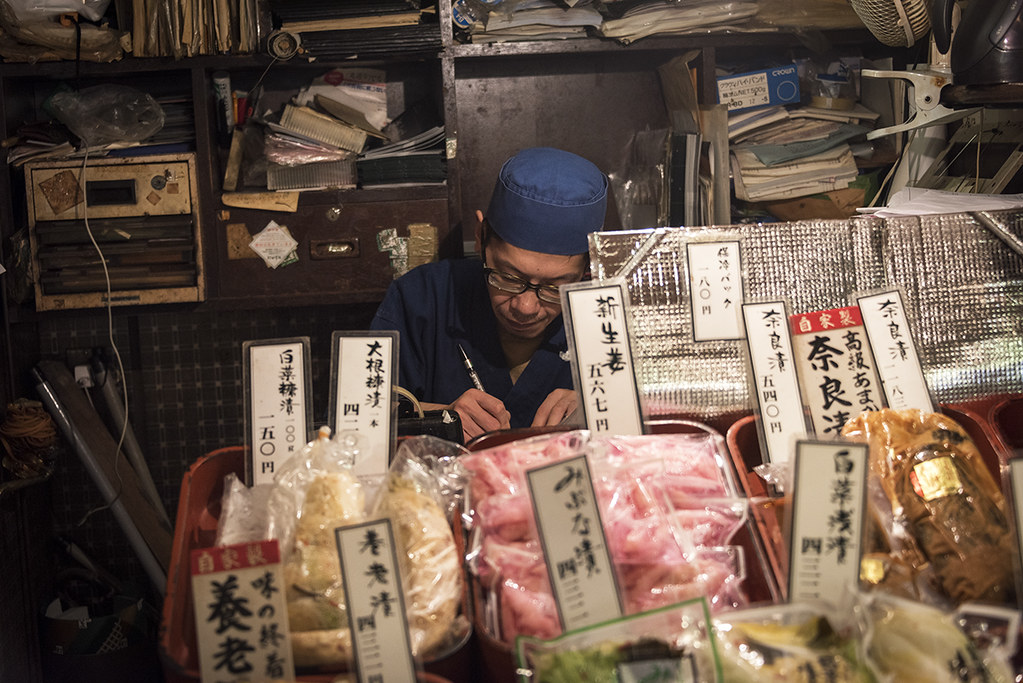 After all, Tokyo may have the most, but Kyoto does indeed have the best.

To find out more about unique Japanese experiences, read all about our visit to Okunoshima, AKA Japan’s Rabbit Island! 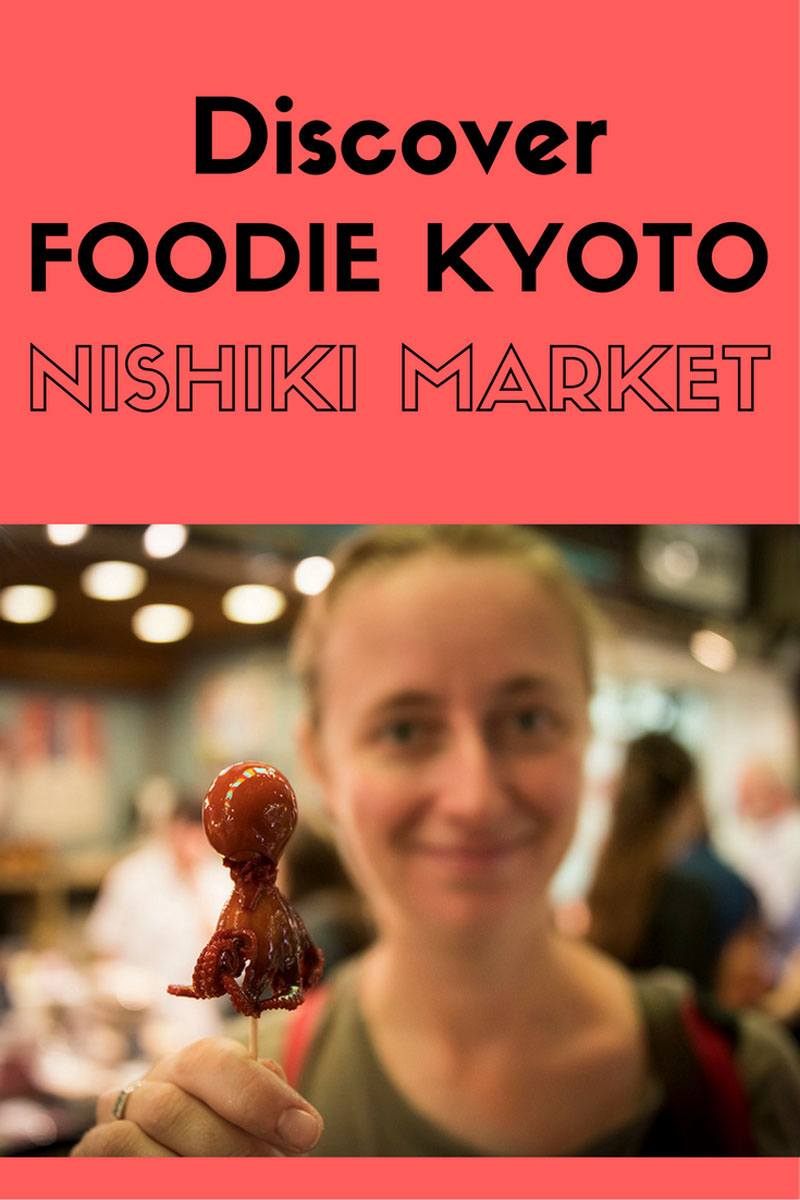 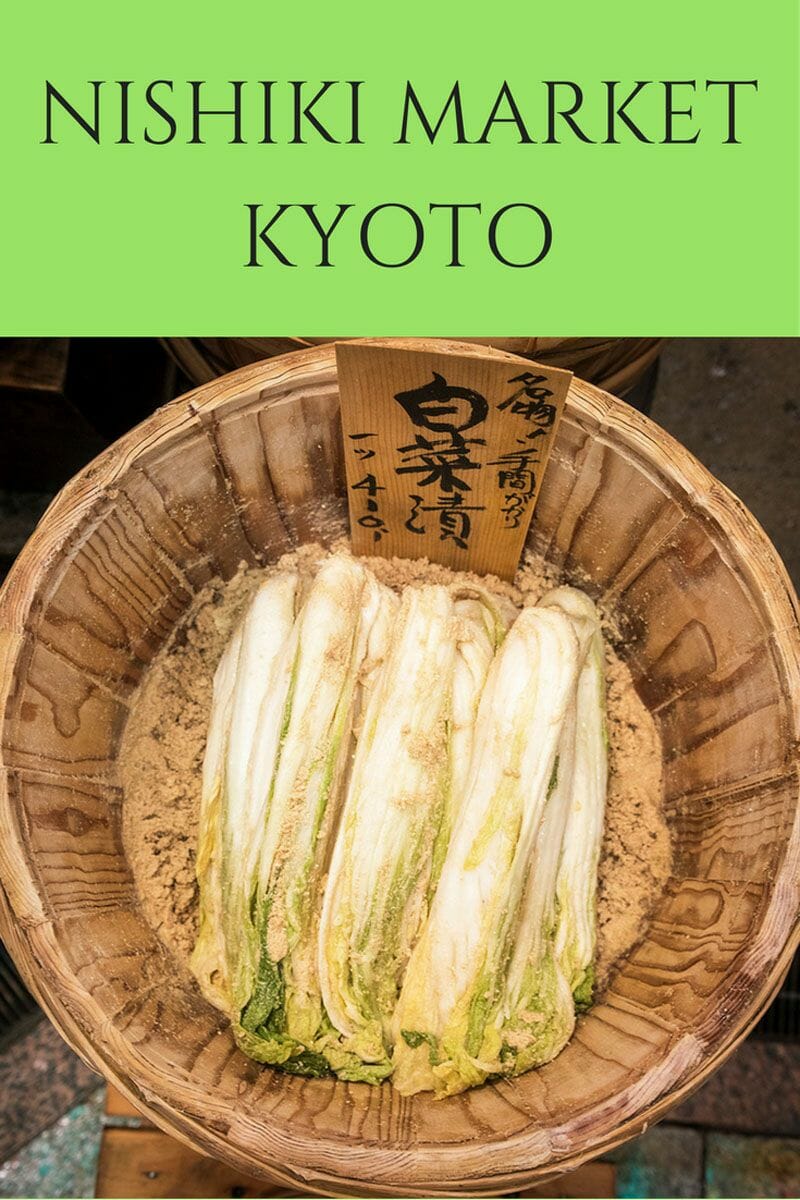 5 Awesome Foods in Finland You Should Not Miss
Next Post: Tourist Spots in Siquijor – Philippines Island of Fire