I can’t believe it has taken me 12 years to finally write about London. The occasion finally came – this article is about our London food tour we did with Eating London, but it’s also about our memories of the place we called home for 6 years.

‘London is the whole world in one city.’

I remember reading this sentence on a news poster, during the aftermath of the 7/7 London attacks in 2005. London was my home, back then. And in London, I found the world – an Australian boyfriend, friends from Brazil, Sweden, Finland, Hungary, South Africa, France and more. I tasted food from countries that I didn’t even know existed.

I was thirsty for the world, and London was the perfect place to quench my thirst. I just needed to hop on the tube, and I would end up in a different country. I could find Jamaica in Brixton, Sri Lanka in Wembley, Bangladesh along Brick Lane, Chinatown in Soho, while other neighbourhoods were a melting-pot of people, faces and culture.

There was one place that exemplified the ‘world in one city’ feel that London had for me in those days – and it continues to have, a few years later. It was the so-called East End, the area just east of Liverpool Street station, all the way north to Spitalfields and Shoreditch.

I saw the hipster transformation of the district happen before my eyes, over the course of the five years I spent in London. Back in 2004, the East End was still kind of seedy. I would head to Petticoat Lane and Brick Lane markets to buy cheap contraband cigarettes coming from ‘ex Yugoslavia’. There were still jellied eels and Cockney sellers yelling ‘toma’os for a pound luv’.

Over the years, the Cockney sellers moved further and further up north, and jellied eels were replaced by vegan burgers and green shakes. Contraband cigarettes and stolen bikes disappeared – hand made bags and minimalistic embroidered t-shirts appeared instead on the market stalls of Spitafields and Brick Lane markets.

Yes, the East End had changed. I held this thought in my head as I made my way towards Spitalfields Market, one chilly November morning. We were headed to the meeting point for Eating London’s East End London food tour, an adventure that would take us through the heart of the area I had known and loved so much – exploring it not only through food, but also through history. And through my very own London memories.

The best bacon sandwich in the world?

When we stopped for our first taste of East London, I almost gasped. We were in St.John’s, one of mine and Nick’s favourite restaurants. The place where we told my parents we got engaged, where we had countless dinners and brunches. The restaurant is famous for having pioneered the ‘nose to tail’ eating movement, serving stuff like sweetbreads (which are actually delicious!) and weird game birds.

We walked in, and it was just like we remembered. The same whitewashed walls, white coat hooks running all around the restaurant room, chalkboard menus and the smell of bacon sizzling on the griddle. My first London job was in a sandwich bar. I know that smell all too well. It was the smell that shook me awake after a heavy night out, the smell I associate to my first job and my first London friends.

Our first taste was – naturally – a bacon sandwich on white bread, with a splash of homemade ketchup. It had a nice, sweet tang to it, not the usual vinegary one. Our guide asked us to guess what it was. Apricots? Wine? Oranges? It was apple juice.

After a short walk, we stopped at The English Restaurant, a family-run place on the site of a former nut roasting house – you can still see traces of the former factory sign over the side of the building. It’s dedicated to English cuisine – which is actually excellent, despite having a bad reputation.

Over my time in London I have also seen a kind of ‘renaissance’ of English cuisine. It was the time of the first celebrity chefs and cooking programs. People were starting to understand the importance of eating fresh and seasonal food instead of microwaved steak and kidney pies. Local chefs took pride in English produce and recipes – I still remember getting excited when English cherries and asparagus reached my local Waitrose, and learning to cook cottage and fish pies, which are still one of my comfort foods.

The English Restaurant is located on Brushfield Street, just opposite Spitalfields Market. I have walked down that road countless times, on my way to Brick Lane from Liverpool Street. Yet, I had never noticed it – but now I won’t forget it.

The restaurant was cute and cozy inside, with wood panelling and soft lights. We sampled bread and butter pudding, and it was totally out of this world. It was made with slices of buttered bread, sprinkled with cinnamon and raisins, soaked in a milk and egg mixture before being baked in the oven, then served with thick, chilled vanilla custard. Pure magic.

Up until then, our tour had focused on English specialties. But that’s not what the East End is famous for. ‘The East End was shaped by immigration’ our guide explained. Once upon a time, those streets were a world away from the theatres and glitzy lights of the West End, and due to their relative vicinity to the Docks, they were often the first home of ‘new Londoners’.

‘The first ones were the Huguenots’ our guide said. ‘Then came the Irish, the Jewish, the Bangladeshi… and the hipsters’. Each of them left something to those streets. The Jews called the East End home for the best part of the 19th and 20th century – we stopped in front of the ‘Soup Kitchen for the Jewish Poor’, open from 1854 to 1992 to offer a hot meal to poor members of the Jewish community. There were several synagogues, Jewish restaurants, jewellers and tailor shops – it was even rumoured that

and one of the East End’s most infamous residents, Jack the Ripper, was in fact a Polish Jew.

Most Jews have left the area nowadays, having moved to Israel or to the Jewish neighbourhoods of Stanford Hill or Golders Green. There is one place where the East End’s ‘Jewish Connection’ still survives – Beigel Bake, a 24 hour bagel bakery near the northern end of Brick Lane. That was perhaps the only place that remained unchanged since my London days. There was the same beeline of people at the door, the same tasty bagels (or beigels?) made in the authentic Jewish way, boiled in big pots of water.

We had salt beef bagels, the same snack I had many many times – for lunch after my Sunday cigarette runs, or after a night partying in nearby Old Street.

[Related – Things to do in Stockholm, including a food tour]

Brick Lane has many faces – one of its nicknames is ‘Banglatown’, thanks to its sizeable Bangladeshi community that took the place of the Jews once they left. The Jame Masjid, the largest mosque for the Bangla community in London, is located in the former Great Synagogue, that beforehand used to be a Huguenot Chapel – the history of Brick Lane in one single building.

I remember my first visit to the street, an evening in the early 2000s when I wasn’t yet living in London. I felt so brave, visiting the ‘East End’ all by myself. I got off at Whitechapel station and made my way to Brick Lane, imagining shadows creeping behind the Victorian houses and the grind of long, thin blades.

Instead, I found a kaleidoscope of colours and sounds, the scent of spices and the call of friendly restaurateurs inviting me in to try their curries.  Each and every one of the dozen Brick Lane curry houses sported a sign, saying it was ‘the best in Brick Lane’. Nowadays, there are more curry restaurants in London than in Mumbai and Delhi, 50 in Brick Lane alone.

Naturally, out London food tour paid a stop to ‘the best curry in Brick Lane’. We had rice, naan bread and a selection of three curries – mild chicken tikka, medium vegetable bengali and hot lamb bhujon. English curries are completely different compared the ones you’d have in India – they are richer, sweeter and creamier, making use of ingredients like ghee, cream and nut pastes. They’re quite heavy, and can be hard to digest, but I do love them.

‘A curry and a pint’ is the quintessential English night out, so after our trio of Bangladeshi curries we headed to the Pride of Spitalfields, a cute nearby pub looking like someone’s living room. The Pride is one of London’s last remaining ‘free houses’, pubs that are not part of mega-chains like Wetherspoons , but its claim to fame is another – it’s the home of @lennythepubcat, a Twitter celebrity! 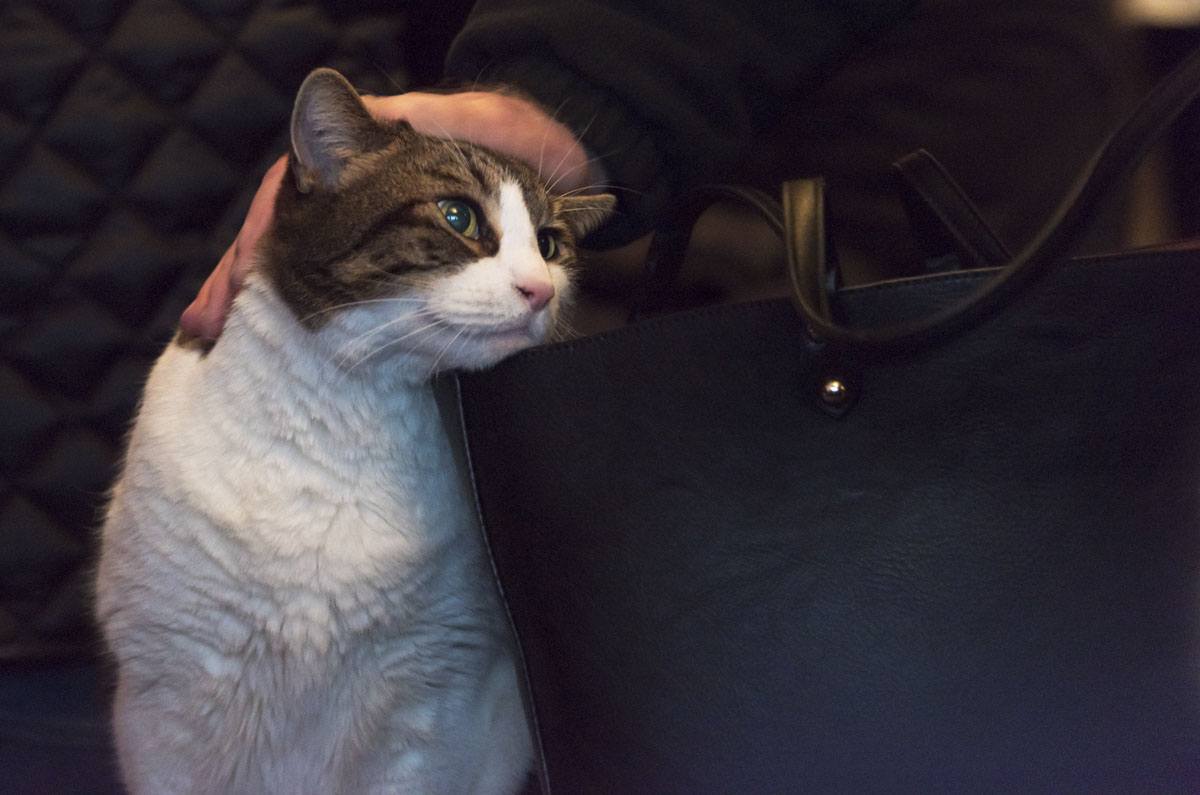 Two of the things I love most are cats and beer, so naturally I loved the Pride of Spitalfields! Some of the beers on offer are old recipes from the Truman Brewery, a historical East End brewery. We sampled a crisp cider and a ‘firestarter ale’, a kind of spicy Christmas ale, absolutely delicious.

Our guide also told us that the word ‘pub’ is short for ‘public house’ – the first pubs were people’s living rooms, called ‘public’ to distinguish them from regular (i.e. private) houses. The Pride of Spitalfields still kind of feels like a living room – with carpet, a cute cat lounging about, soft couches to sit on. I would have stayed, but alas our time was up.

Shortly afterwards, our tour came to an end. I haven’t revealed everything about our London food tour – but where would the surprise be, if I told you all there was to know? There was also cheese, fish and chips, and the best sample of them all, a salted caramel and chocolate cake. Or was the bread and butter pudding my favourite of them all? Sorry not sorry for being a sweet tooth. 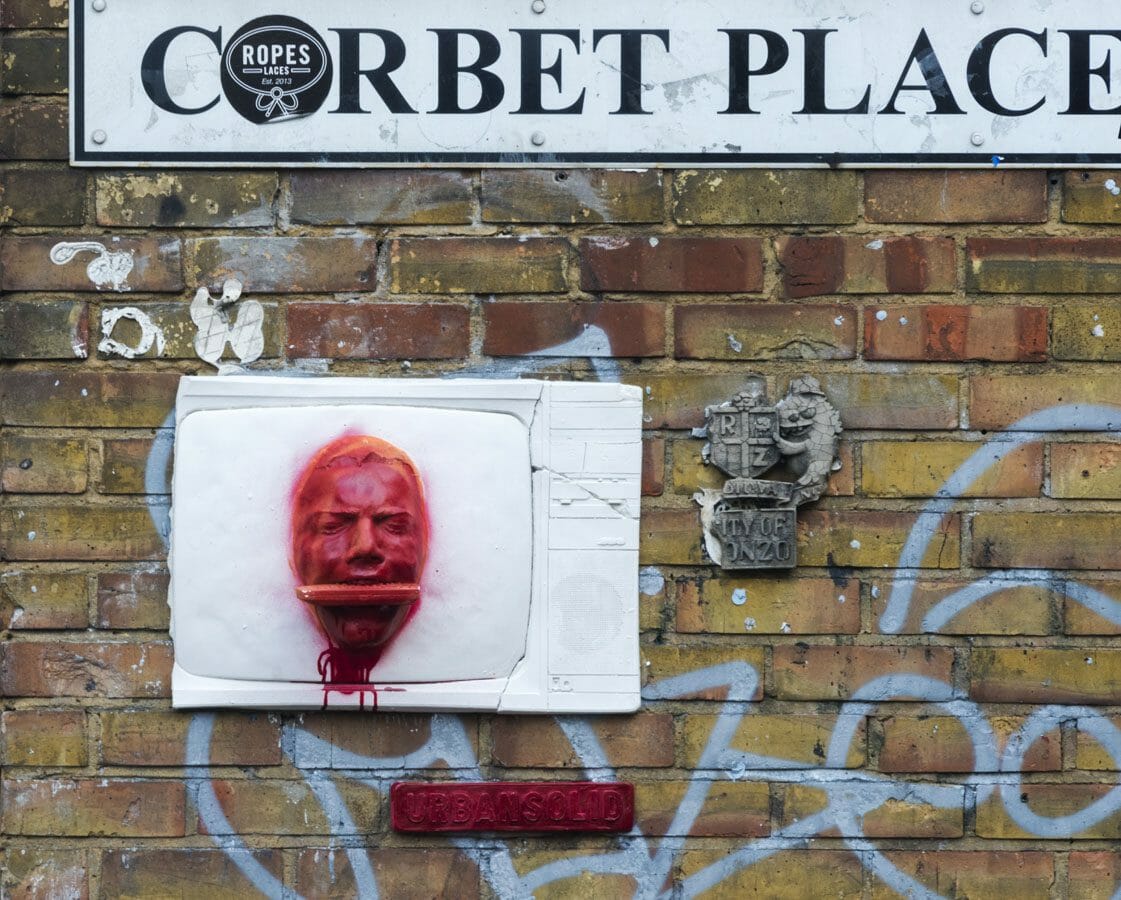 From Brick Lane we moved north, bound for Shoreditch High Street. Some things were definitely different – the walls were full of colourful street art, whereas a decade ago I can’t remember anything besides pulled-out posters and spray painted tags. Naturally, many of the shops and eateries I remember had closed down. After the tour had ended, we turned down Sclater Street, looking for a shop I used to love, where a brother and sister duo from Barcelona sold hand-drawn t-shirts. I was curious to see if the brother and sister were still there, but the shop was all boarded up.

Yet, not everything changed. I heard many languages – German, Bengali, Arabic, Italian, Swedish. Yes, and London English. The same voices. The same colours. The same smells that a decade before made me feel the world in one city, simply walking up and down Brick Lane. This was Britain after the Brexit vote, only a few days after He Who Must Not Be Named won the US elections. In a time when everyone is battening down the hatches, it was refreshing to see that the world is still welcome in the East End.

We were guests of Eating London during this tour. All opinions are our own – we loved the tour and highly recommend it. 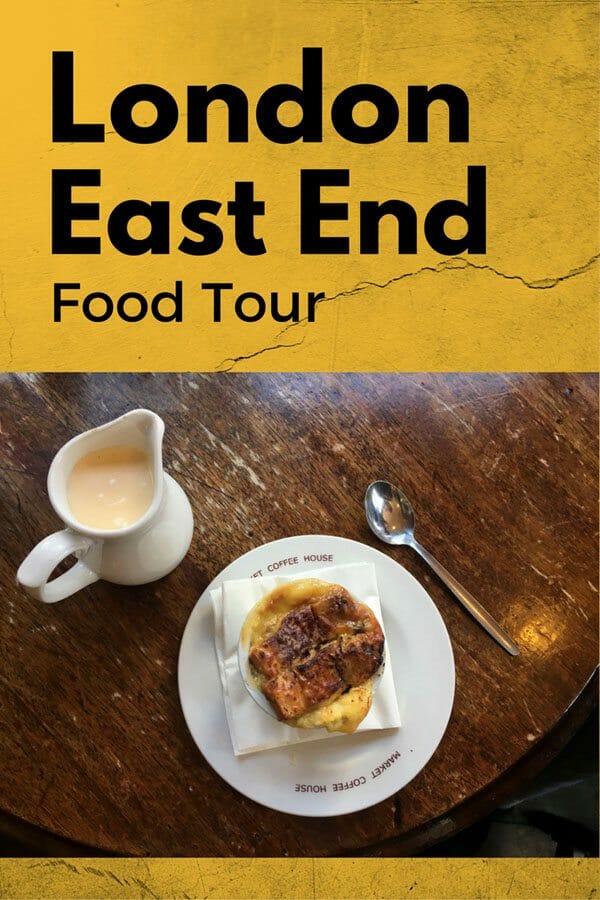 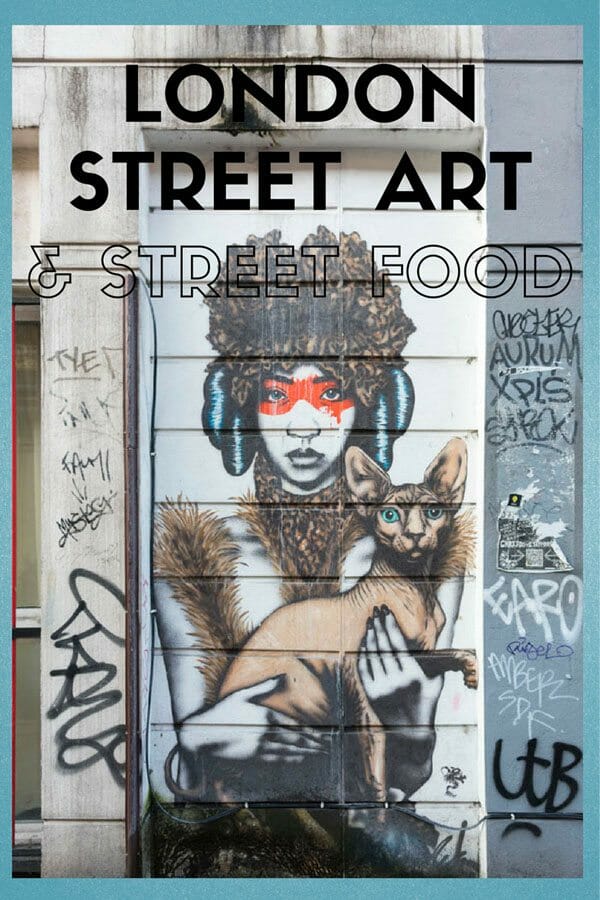