Did you know you can go bear watching in Finland? Just head over to Kuusamo in Eastern Lapland in summer or early autumn to see these wonderful creatures from the safety of a hide. Kuusamo is also very easy to reach if you’re on a stopover in Finland – a great way to break your journey if you’re flying between Europe and Asia or vice versa!

Everything was still – the pond, the treetops, the reeds. There was no wind, not even the faintest breeze – as if somebody hit the pause button, and the landscape had frozen in a specific point in time, stuck between two seasons. Summer and autumn. The colours of ruska – russet, flame-red, opaque yellow  – were starting to appear on the trees, bushes and shrubs that framed the fir forest opposite which we sat. Silent. Motionless.

‘Now, all we have to do is wait’, said our guide, after leading us to a hide opposite the forest that marked the border between Finland and Russia. A few dozen bears lived in that forest, free to wander between the two countries, so near yet so far away. Between May and October it’s possible to see them – there are three hides on the Finnish side, not far from the town of Kuusamo.

Into our hide there were four bunk beds and enough space for about 10 people to sit comfortably. We were behind a large glass window – the photographers in our group had put their camera lenses through holes in the canvas covering of the hide, and propped them in the right position with beanbags.

All we have to do is wait. It was hard not to get up and pace around to kill time. Sometimes I looked through my viewfinder, trying to focus on a boulder, then on the pond, then on the treetops. Who knows where they might appear, I thought. Time went on, and light started to fade. It was a cloudy day. There was no sunset, no blue hour, just a grey haze that got progressively darker as the minutes went by.

As always when dealing with wildlife, viewings are not guaranteed – ‘but we have a good chance’ our guide said. I thought of all the times wildlife eluded me. In Danjugan Island, South Australia, Sarawak, Kerala. Over the years, I stood for hours under the rain, walked for miles in the mud and swam until I couldn’t swim anymore – sometimes I’ve been lucky, other times not so much. We can’t force nature to do our bidding. I repeated this sentence as a mantra, sitting with my forehead glued to the glass.

Our guide passed me a book. It was titled ‘The Hour of the Bear’. It was hard to read, in the grey early evening light. ‘The bear will appear when he wants to’ the book read. ‘When the moment is just right, the shadows and lights just as intended. The hour of the bear’.

I looked at the pictures and matched them with the landscape just outside. There was the same dull light, the same stillness in the air, the same fading shadows. It was the hour of the bear.

Soon, a large, black frame started moving across the trees, heading to the edge of the pond. Was it a bear? It was hard to make out exactly what it was, or where it was going, hidden in the thick undergrowth. At first glance, it looked humongous and shapeless – was it a guide spirit, or a super-natural manifestation of our collective wish?

Well, magic indeed happens in Lapland. What we saw was a large brown bear, a male, about 8 years old. He paced around the pond, slowly, scanning the surrounding with quick, jet-black eyes. He his fur was very dark, almost black, except around his forehead and cheeks where it was chocolate.

We were all hypnotised. Some crouched over their cameras, trying to get the perfect shot. Others tried with their phones – only to realise that it was too dark, and it didn’t matter if we weren’t able to capture that moment. That moment would stay with us forever – the hour of the bear, a rare encounter with the mysterious dwellers of these mysterious forests.

Shortly afterwards, another bear made its way out from the woods. He crawled out from behind a bright yellow bush. Another male, much younger and smaller – this one was the colour of cinnamon, with dark-blond fur around his head and face. I asked our guide if the two bears were different species. No, he said. They are both brown bears. Just like some people are blond and some dark-haired, the colour and appearance of bears also change.

The two bears didn’t seem to acknowledge one another, pacing the pond independently and stopping to sniff and pick up some salmon bones. Yet, there probably is some kind of unspoken code between them and the rest of the group – as if the first two had been sent out to check out the place, make sure it’s safe.

Soon enough, more and more bears left the woods. One came from the edge of the pond on the left hand side. He was possibly even larger than the first one, with a light-brown mane of hair around his neck. Another sat – half hidden – behind a boulder, before making its way out, straight into the water. Some came alone, others in pairs. I counted eight bears – pacing, sitting, splashing, drinking, eating.

Eight bears. When I was praying we would see one.

We might also see foxes, wolves and wolverines, our guide said just before entering the hide. They’re very rare, much rarer than bears. In the photo book I was browsing through I saw some images. A fox cub, camouflaged by the autumn colours. The lanky silhouette of a wolf. A wolverine – looking like a miniature bear – climbing a tree.

I wanted to scream with joy. I wanted to run out and bask in the magnificence of that early autumn night.

Yet, something else was in store before we left the hide. I saw something bobbing through the reeds. Two, maybe three figures – one larger and the others smaller. Cubs! I muttered.

By then, the light was well and truly gone, and it was a challenge to follow the mother and two cubs as they make their way across the reeds to the pond, and then came right to the hide, barely a couple of meters from where we all sat. We could see them without being seen, without being heard, without disrupting their life rhythms – we all contained our joy and just sat, mesmerised, watching the cubs as they ran through the grass, climbed up the fir trees, using up their summer energy before the long winter slumber.

When we couldn’t see anything anymore, our guide told us it was time to go. As soon as we closed the door of the hide we had to leave in a group, without hesitation, or else the bears might notice us.

The darkness was almost total. A cloudy, starless, moonless night. We walked back to the car in silence, thanking Nature within our hearts.

Other Ideas for your Stopover in Finland:

We would like to thank Finnair, Visit Finland, Ruka Kuusamo and Nordic Bloggers Experience for having hosted us during this trip, making this article possible. 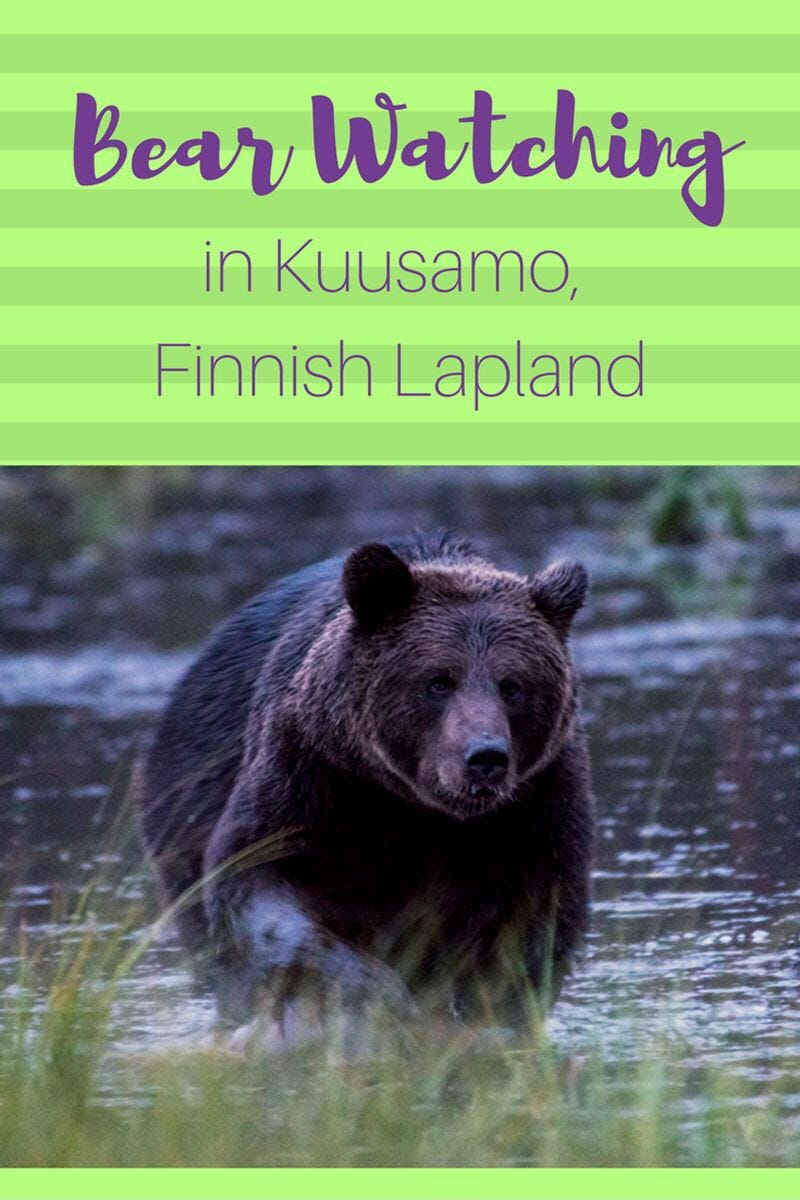 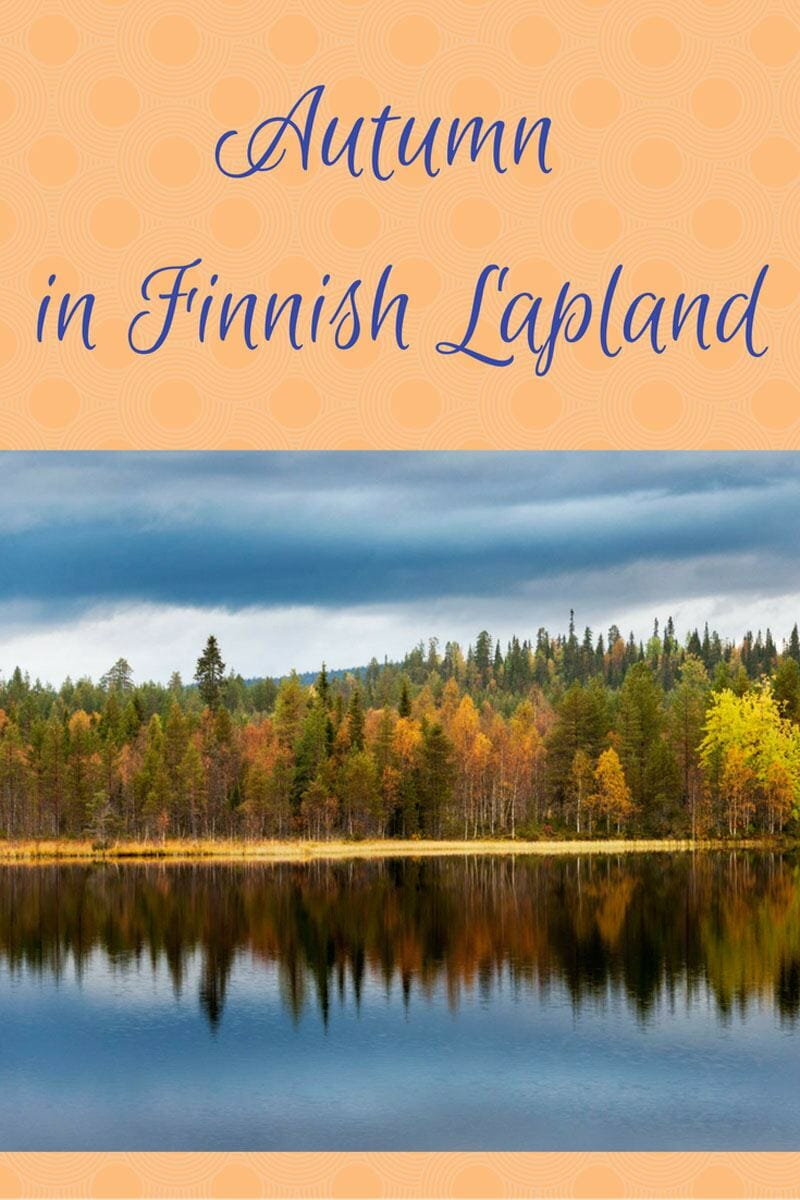 Stopover in Finland – Helsinki & Beyond
Next Post: Sleeping in a Lighthouse in Finland – A Night on Bengtskär